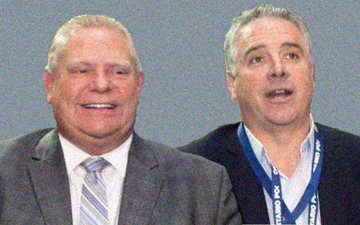 Note: The following statement was received on July 3, 2019, from Keith Bowman, FCPA, FCA, chief executive officer of the Public Accountants Council for the Province of Ontario, and is reprinted in full by Canadian Accountant:

"On behalf of Gavin Tighe, thank you for your email and the correction [see below in byline]. Your article has brought to our attention that the bio for Ms. Pal on the government web page does indeed appear to have been inaccurate. The Public Accountants Council for the Province of Ontario ("PAC") is in contact with government to correct those errors (which we assume are merely clerical in nature) and to verify the accuracy of the bios of all public council members. PAC remains committed to its mandate of ensuring that public accounting in Ontario is practised in accordance with internationally respected accounting standards that reflect the public interest in the delivery of superior quality public accounting services. The strength of the qualifications and expertise of the council members continue to be invaluable in the achievement of that objective."

TORONTO, June 27, 2019 – The Public Accountant’s Council for the Province of Ontario (PAC) announced Tuesday that Katherine (Kate) Pal, a relative of the former chief of staff to Ontario Premier Doug Ford, has resigned as a public appointee of PAC. The news comes just days after two similar appointments were rescinded by the Ontario Premier, who accepted the resignation of Chief of Staff Dean French last week, and then publicly stated that French “no longer has any influence in the PC government.”

In a message posted to its website, PAC CEO Keith Bowman, FCPA, FCA, defended Pal’s credentials: “With regret Ms. Pal has decided to resign from Council effective immediately. Ms. Pal, was, however, extremely well qualified for membership on the Council. Her finance credentials are impeccable. In addition, to significant experience in the financial services industry, Ms. Pal holds an Honours Bachelor of Commerce from Queen’s and is a Certified Financial Planner and Chartered Life Underwriter among other qualifications.”

Bowman, a retired partner of EY Canada who also served as chair of the Institute of Chartered Accountants of Ontario (now CPA Ontario), added: “Ms. Pal’s contributions to the Council will be missed and on behalf of the Council we thank her for her service.”

Pal was appointed to the Public Accountants Council for a three-year term starting Dec. 31, 2018. She is a certified financial planner who is the managing director of Pal Insurance Services Ltd., a multigenerational family business (started by father Joe Pal), specializing in life insurance and estate planning.

The Premier’s office confirmed this week that Pal is the niece of Jane Pal, who is the wife of Dean French. Last week, it was revealed that Taylor Shields and Tyler Albrecht, two appointees to the well-paid positions of Agent-General in London and New York respectively, had close ties to French and his family. Shields, an assistant vice-president of marketing for Chubb Insurance, is a second cousin of French’s wife. Albrecht, a 26-year-old senior analyst at Optimize Capital Markets, is friends with French’s sons, having played lacrosse with one of them while in school where French was a coach.

Agents-general positions have not existed in the Ontario government since the 1990s. The Ford government resurrected the positions, with salaries of $165,000 to $185,000, to promote Ontario business in London, Chicago, Dallas and New York. The Chicago position was bestowed upon the former chief of staff to the late Rob Ford, former mayor of Toronto. The Dallas position to a past president of the Ontario PC party.

Public appointments by governments are rarely granted to individuals who are not affiliated with the party in power. They are often viewed as a reward to individuals who have supported a party or candidate through campaigns, political donations or both. They are also seen as a way of ensuring that likeminded individuals represent the government’s interest on the boards and councils of public agencies and organizations created through government legislation.

Many chartered professional accountants are keenly interested in serving on corporate and public sector boards and councils for a variety of reasons that include civic duty, influence, networking and compensation. Joining a political party and working on a political campaign is, for many professionals, a step towards a public appointment.

According to sources, what distinguishes the public appointments of the Doug Ford government and Dean French in particular is nepotism — the practice among those with power or influence of favouring relatives or friends, especially by giving them jobs. Global News quoted a PC Party source as stating, “French’s nepotism continues to contaminate the PC government — even when he’s gone, his connections still run deep.”

Pal’s appointee biography, which has been removed from the Public Appointments Secretariat, differed from that posted by PAC and contained a number of errors that led to confusion regarding the credentials of Ms. Pal. Her official biography is as follows:

Kate Pal is a Principal at Pal Insurance, a multigenerational family business specializing in life insurance and estate planning. Kate advises some of Canada’s high net worth individuals, families, and most accomplished entrepreneurs on areas including estate preservation, inter-generational wealth transfers, succession planning, and philanthropy. Her past roles took her overseas for private equity and commercial lending in emerging markets.

A lawyer with Gardiner Roberts LLP in Toronto, Tighe has acted as Premier Ford's personal lawyer and is representing French in a defamation case against PC MPP Randy Hillier. “To be perfectly blunt, it's difficult to find members, it's very difficult to find female members with that type of background,” continued Tighe. “It's unfortunate that this has occurred and that she's been disqualified from this."

PAC is funded not by taxpayers but by Ontario’s chartered professional accountants. According to its 2018 Annual Report, “Similar to the Ontario Securities Commission, the Council’s operating expenses are funded by the self-regulating profession, not the Government.” In 2018, PAC’s operating costs of $1,075,000 were entirely funded by annual assessment fees charged to CPA Ontario, which is in turn funded by membership and student fees.

By Canadian Accountant with files from Global News. An earlier version of this article incorrectly identified Ms. Pal’s employer as Pal Insurance Brokers. Ms. Pal is a principal at Pal Insurance Services Ltd. Canadian Accountant sincerely regrets this error and has corrected any statements made in the article that were based on this assumption. Pictured: Ontario Premier Doug Ford and former Chief of Staff Dean French.

A technical dispute over accounting cost Wynne the election
Provincial