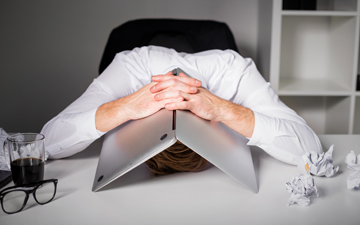 VANCOUVER, September 18, 2018 – The three-day 2018 CPA Common Final Examination is finally over and I think it’s safe to say that most people found it a complete and utter gong show of an exam. I don’t know what previous CFEs were like but if they’re anything like the three days that I experienced, I feel sorry for everyone who ever sat through it.

As a student in the Chartered Professional Accountant professional education program (CPA PEP), I've been writing about my experiences in the program for the last year, but I took a break in the lead-up to the CFE to prepare myself for a famously difficult exam. Now that the whirlwind is behind me, I think it's a good time to give you my impressions.

Having spoken to many students who sat — and after reading many Reddit threads for each of the days — I know I’m not the only one that found it tough. Here are my thoughts:

Nothing surprised me about Day One. It’s hard to know how the day went as it’s not marked technically, it’s all about how well you communicate. I followed the strategy I used during Capstone 2, which previously resulted in good marks, so I’ll hope for the best.

They went for the jugular on Day Two. The second day is all about technical depth in financial reporting and your elective proficiency. My proficiency is performance management but the hardest part of this exam was the financial reporting. Firstly, the five-hour case was an IFRS case, which, in my experience, was very rare for most CPA program cases. They also purposely targeted new IFRS standards, such as IFRS 15, which most people were inexperienced with due to the fact they only came into effect in 2018.

On top of that, they also asked obscure questions like, "how to calculate diluted earnings per share," and "how to account for business combinations." Seriously?! Where are all the topics you drilled into our heads in Capstone 2 like intangible assets, non-monetary transactions and contingent liabilities?

Few of the topics were covered in Capstone 2. Many people were aggrieved by this and I tend to agree. Capstone 2 was great for preparing you for how to approach a case but I was very surprised at how little of the Capstone 2 content was covered during the CFE. None of the financial reporting or tax topics from the CFE had been covered in Capstone 2 whatsoever, so you would only have known how to respond if you covered these topics through self-study.

Also, there was only one IFRS case in all of Capstone 2, yet they go and throw IFRS into the most demanding day of the CFE and, not only that, throw the new IFRS standards at you as well. That’s just plain mean!

Day 3 was more frenetic than expected. While I felt totally prepared in terms of time management going into the CFE, I was very wrong when it came to Day 3. I knew this day was the most demanding for time management and it didn’t let me down. The first and second case went somewhat okay but by the third and final case the race was well and truly on. Even though these cases are only 60-90 minutes each, they still manage to pack in A LOT of questions and if you don’t instantly know how to answer them, you’re going to struggle with time. I know several people who did not complete all of the questions. Luckily, I managed to at least respond to everything, but the quality of my responses were extremely rushed by the end.

They’re sneaky with their questions. My biggest weakness for the CFE wasn’t my knowledge. It was correctly interpreting their questions and comprehending what on earth they were asking. Rather than directly asking you a question, they provide a story or an issue and you have to figure out what it is they want you to say. Sometimes this is easy enough, but other times you think you know how to approach it and answer, then finish the exam, chat with a friend and realize you completely misunderstood what they were asking. I know I got a few tax questions totally wrong because I had no idea they wanted me to approach it the way they did.

At times the questions were unusually basic. When revising for the CFE I would sometimes skip over topics to study because I thought they were just too basic and would never be asked. One such topic was tax deadlines. I hadn’t faced these since PREP so surely they won’t ask something as basic as this? I mean, isn't it far more important to know how to calculate net income for tax purposes or taxable income for a personal filing?

Well, I was wrong. Neither of those were on the CFE but, lo and behold, on the final case of the final day, a bunch of questions about tax filing deadlines. Perhaps CPA Canada thought this was an opportunity for scoring easy points to reach proficiency in tax but it was the complete opposite for me. I was left hopelessly scrambling through the ITA in the most time-sensitive case. Sadly, I did not succeed.

Overall, I was surprised by how difficult the CFE was based on how confident I felt going into it. I felt fully prepared, knew how to approach each day, had been ace-ing the Capstone 2 cases for the past couple of weeks. I knew my study cards like the back of my hand. A part of me feels like CPA Canada wanted to test our resolve and see how we coped when thrown into the lion’s den.

The only solace I am taking from this is that everyone I spoke to found it difficult. I know the historic pass rate for the last three years of the CFE has ranged from 68.7 per cent to 77.6 per cent and I fully expect the pass rate this year to be in the same range. Based on that pass rate you certainly don’t need to be perfect. If everybody struggled, they simply have to mark more generously.

On that note, good luck to all those that wrote! The long, painful wait to November 30 will not be pleasant but hopefully we get across the finish line. To anyone who wrote the 2018 CFE along with me, may the CPA gods be on your side.

Andrew Knapman lives in Vancouver, B.C. and is a student in the CPA Professional Education Program through CPA BC. The views expressed in this guest blog are his own. Connect with Andrew through his LinkedIn profile and follow him on his journey to becoming a Chartered Professional Accountant through future blog postings on Canadian Accountant.

The CPA PEP core modules: What should you focus on?

Writing a CPA PEP exam? Get ready with these five insider tips

The pros and cons of buying from CPA program prep companies