Book Review – Victory Over the CRA: An Accountant's Guide to Representing a Client 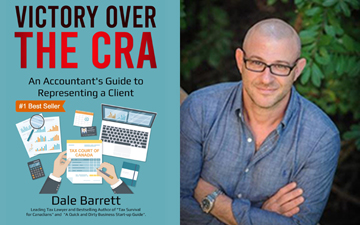 BOOK REVIEW – One’s opinion of who wears the white hats and who wears the black hats in the timeless showdown between tax professionals and the Canada Revenue Agency often depends on one’s political persuasion — unless, that is, it’s your face on the Wanted poster. That’s when taxpayers typically turn to an accountant or a lawyer who has the steely eyed conviction that their client is in the right and the CRA is in the wrong. Someone, say, like Dale Barrett.

The writer of a popular tax column in The Lawyer’s Daily, Barrett is the principal of Toronto-based Barrett Tax Law and the gunslinger of the best-selling Tax Survival for Canadians: Stand up to the CRA (Self-Counsel Press, 2013). While “Tax Survival” was aimed at the average taxpayer, Canadian accountants should take note: Barrett has just published another fierce volley against the CRA, titled Victory Over the CRA: An Accountant's Guide to Representing a Client (Barrett Publishing, 2020).

“Victory” is a step-by-step journey through the entire CRA audit process, from tax planning to filing to objections to relief provisions. It combines thorough guidance, a selection of the author’s columns from The Lawyer’s Daily, and Barrett’s particular brand of engaging, forthright opinion. It makes for highly entertaining reading told in second-person singular (“you will/you should,” etc.) and an author’s voice that most certainly speaks to CPAs:

“If you are one of those accountants who prepares T1s and T2s and files them on behalf of their clients, then you already know all there is to know about filing. Far be it for a tax lawyer to educate you in your métier. So, I’ll focus mainly on the issues around filing — in particular those issues [of] which an accountant should be aware.”

Never demure, the author sees the CRA and its minions as the opposition, a sometimes vindictive, often ignorant army that can wreak havoc in the life of the average taxpayer. The CRA audit process, therefore, is a binary battle, a war or game — choose your metaphor — where victory is the objective. It’s an oppositional, often antagonistic worldview that (having never been audited by the CRA) may be entirely realistic.

Barrett wastes no time in staking his ground, likening the CRA to “mobsters” in the first paragraph of chapter one, who “will be your client’s silent partners, receiving a percentage of the take.” He tempers that attack, however, by advising, “Treat the CRA well and they will treat you and your clients well.” Elsewhere, Barrett refers to himself as a “hostage negotiator.”

In a fascinating chapter on CRA collections officers, Barrett is even more direct, asserting: “While many [collections officers] are pleasant and easy to deal with, the majority are not. A great number of them seem to have let their discretionary power get to their heads …” The typical collector, says Barrett, is neither highly educated nor knowledgeable about business and is incentivized to close files.

The author reproduces some relatively simple questions from the collector’s general competency test, saying: “I promise you that these are real questions that your client’s collector has to be able to answer. I couldn’t possibly make this up. I’m not that creative. I’m just a simple tax lawyer.”

Zingers like that help to carry the reader through the more arcane sections on rollovers, estate freezes and the like. It also helps that Barrett reproduces relevant tax forms and schedules, as well as screenshots of the CRA website, to augment his instruction. Perhaps most important to the experienced CPA, however, is Barrett’s advice as an advocate for clients.

For example, in Part 3 (“After Filing Returns: Notices of Assessment”), Barrett writes, “A piece of advice that I give all of my clients is that once they know that there is going to be a tax debt, regardless of whether it is collectible yet or even assessed, they should start making payments.” You’ll have to read the book to find out exactly why, but Barrett sums it up in typical Barrett fashion: “So, keep the computer happy. Happy computer, happy taxpayer. Happy taxpayer, happy you.”

As with many self-published books, “Victory” could have used another round of proofreading, for the occasional repetition and formatting issues. And, at 240 pages, veteran CPAs may feel the tome covers some already charted territory. Barrett’s columns in The Lawyer’s Daily (like “A Sad Story About Mr. X from Country Y,” republished on Canadian Accountant) are, however, minor masterpieces of insight and attitude, and deserve to be included. Many CPAs reading these for the first time will delight in finding a kindred spirit.

Like the popular Tax Survival for Canadians: Stand up to the CRA, which ranks 49th in “Personal Taxes (Books)” on Amazon.ca, Victory Over the CRA: An Accountant's Guide to Representing a Client is a winner, currently ranking 26th in “Taxation Law (Books).” That’s a reflection not only of Barrett’s highly detailed explorations of the CRA audit process but his willingness to take a public, provocative stance. Barrett wears the white hat with confidence. Canadian accountants will find his book both informative and inspiring.

Colin Ellis is a contributing editor to Canadian Accountant. Victory Over the CRA: An Accountant's Guide to Representing a Client, by Dale Barrett, is published by Barrett Publishing. Tax Survival for Canadians: Stand up to the CRA is published by Self-Counsel Press.

Your designation only gets you in the door
Book Reviews