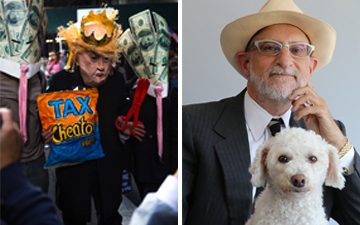 The investigation into former US president Donald Trump's finances could be turned into a hit TV series, says tax accountant and lawyer David J Rotfleisch

RECENTLY, the Washington Post reported that New York prosecutor Cyrus Vance Jr., Manhattan’s District Attorney, had hired a firm of forensic accounting experts to assist with the criminal probe, first launched in 2018, of former U.S. president Donald Trump. At issue are Mr. Trump’s real estate transactions; two hush-money payments to women with whom he allegedly had extra-marital affairs; and allegations of bank, tax and insurance fraud.

This is the (former) president of the United States we’re talking about! The very fact that we even have reasonable ground to investigate a president is patently shocking and shameful.

This investigation sounds more like a great screenplay by Aaron Sorkin, to be produced by Jerry Bruckheimer, for a must-see movie or TV series. As both a tax lawyer and an accountant, I volunteer to assist with research and the fine points of offshore accounts, Black Money, and the difference between tax avoidance (legal) and tax evasion (illegal).

Or perhaps the “witch hunt” depends on which side of the clearly divided political line you stand. The use of forensic accountants should definitively decide this issue.

Accountants and bookkeepers are responsible for recording transactions in the books of a business. Auditors verify that those books are accurate. Audits by regular auditors are typically carried out on behalf of public companies or on behalf of banks that want to verify the books of their borrowers.

Tax auditors are employed by tax authorities such as the Internal Revenue Service in the United States, the Canada Revenue Agency, or Inland Revenue in the UK to make sure that there is no hanky-panky in the books that will deprive the government of tax revenue.

The most rarefied breed are forensic accountants. Methodical is the new sexy.

For example, an accountant will show that $1 million was expensed to pay for services. The company’s auditors will verify that this amount was, in fact, spent by looking at the wire transfer or canceled check and the invoice for the services.

Ledgers may or may not lie — and sometimes they hide the truth.

My very first audit assignment was with a client in the shmata (garment) business in Montréal. I was tasked with reviewing credit notes. One customer from Jamaica had consistently large credit notes. It turned out that the customer was being over-invoiced and issued with credit notes in order to evade Jamaican currency controls. The customer would visit Montréal several times a year and receive the credit note balance in cash.

These are known as “accommodation invoices” and can be as simple as this example, or slightly more sophisticated, with setting up a dummy corporation that invoices for nonexistent services.

The American International Group fraud that took place from December 2000 to March 2001 was an accommodation invoice fraud where AIG entered into a series of fraudulent transactions with Gen Re Corporation in order to create a false reinsurance policy to increase the appearance of loss reserves on AIG’s balance sheet.

The reverse of this strategy is commonly used to pay bribes to government officials. A supplier, domestic or foreign, will overbid and over-invoice and then pay bribes, in an offshore bank account, to a government facilitator. That is what happened, for example, with Odebrecht of Brazil, which is still involved in multiple bribery cases.

With this high-profile investigation of Mr. Trump, I would think that designers Tom Ford and Hugo Boss would be seriously interested, if a television series was created. And there is ample production talent working for all the streaming services to make it worth their while.

David J Rotfleisch, CPA, CA, JD, is the founding tax lawyer of Rotfleisch & Samulovitch P.C., a Toronto-based boutique tax law firm. He appears regularly in print, radio and TV. With over 30 years of experience as both a lawyer and chartered professional accountant, he has helped start-up businesses, resident and non-resident business owners and corporations with their tax planning, with will and estate planning, voluntary disclosures and tax dispute resolution including tax litigation in Tax Court and the Federal Court. Visit www.Taxpage.com and email David at david@taxpage.com.

Welcome to the black money, underground economy of the construction sector. My cottage can wait for an honest worker
Opinion