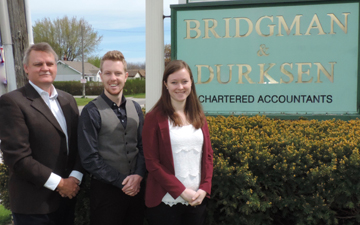 TORONTO – When it comes to the Common Final Examination (CFE), students from the large firms dominate the National Honour Roll. The Big Seven have the numbers. They have the resources. And their students grab the gold medal honours.

How did B&D beat the odds and place two students on the CFE National Honour Roll?

“It’s all about the wheel, not the pyramid,” says Vic Durksen, CPA, CA, of the workplace culture at Bridgman & Durksen. “A wheel has many cogs but at the centre is the customer. I’m just one cog in the wheel.”

Cogs, for those who aren’t engineers or gearheads, are the tiny teeth that interlock to turn a wheel. Only a few cogs interlock with the centre at any one time.

“If the needs of the client change,” says Durksen, 54, “and if we need to rely on different cogs, or people, to serve that customer, that’s fine.” And that, according to Durksen, includes junior employees such as Alyce and Steven. Adds Durksen, “The client is the only priority.”

That philosophy has supported the growth of Bridgman & Durksen. Ken Bridgman founded the firm in the mid-1970s. Durksen joined Bridgman in 1989, then bought out his partner in 2012. The firm has two offices, in Niagara-on-the-Lake and St. Catharines respectively, and an annual revenue of $2.5 million.

At a time when large firms are swallowing up smaller competition across Southern Ontario, Bridgman & Durksen will add five new partners in the coming year and open a third office, in Beamsville, officially joining the ranks of mid-tier firms.

Durksen says that, at the CPA Ontario Honour Roll Dinner, “We got some strange looks, when they were announcing ‘downtown Toronto, downtown Toronto.’ And then it was like, ‘who are these guys?’” According to Durksen, however, there's a reason his students could compete against the big guys.

Alyce te Bokkel and Steven James Enns were both top students at their universities, Redeemer and Brock respectively, who achieved top marks across all disciplines and received Governor General's Academic Medals.

“You got the yin and the yang there,” says Durksen. “Steven is very confident and moves forward at a 150 miles per hour and wants to do every job in the office. He gets a lot of satisfaction from the advanced corporate personal income tax side and the M&A side, which he adds a lot of value to, in terms of structuring, negotiating and analytics. He’s just naturally brilliant.”

Alyce is “extremely, extremely humble” and has “the same depth of intellectual capacity as Steven.” Durksen believes that Alyce wants to and would excel at the client service side, where “you hold the hands of clients throughout their lives and all the issues that entails. That’s where she would shine — always looking out for their best interests.”

According to Durksen, neither student took much time off for study, which is confirmed by Steven Enns. “I do not think we did anything too different than most other students. We were both off for only about five to six weeks to study — less than a lot of other people I talked to — and we used Densmore for preparation,” reports Enns.

“Interestingly, we mostly self-studied,” adds Enns. We did compare some notes and review each other’s practice cases but for the most part we studied alone. We found that to be the most effective way to do it.”

Durksen is not surprised. “Fundamentally, they both have a great work ethic.” Alyce is Dutch-Canadian, Steven is Mennonite. “The protestant work ethic is alive and well,” says Durksen, who looks for students who had full-time jobs during the summers and worked after school. “When students come for an interview and they haven’t worked summers — well, I don’t want to be the guy to teach you how to work.”

Bridgman & Durksen specializes in five areas, or tranches: agriculture, particularly wineries; not-for-profit; incorporations of professionals; manufacturing and construction; and retail and hospitality. The firm may be unusual in that Durksen trusts junior staff to act as primary contacts for some clients. “Alyce and Steven have been primary contacts in the past and they continue to be, more and more,” explains Durksen.

Durksen stresses, “It’s about the wheel, not the pyramid. The person who manages the client account could be Vic Durksen, it could be a senior manager, could be a 10-year person, [but] some of my first-year students are managing accounts already. They are the primary client contact. You’ve clicked with that client, so keep it going.”

By the time they got to the CFE, says Durksen, Alyce and Steven had “already employed most of the things they would be asked in their exams. It would have been easy for them to recognize the issues at hand in case studies because they see them all the time with our clients.”

That culture helps when it comes to the CFE. “It’s not like you have a case study put in front of you and you don’t know what the picture represents because you can’t even see the colours. [Alyce and Steven] know because they’ve seen those client situations and dealt with them already. We pull them in on all aspects of our clients, right from the get-go. They’ve seen it all.”

“We have great discussions here,” says Durksen, “and we have arguments back and forth on principles, assurance, GAAP and GAAS. We explain the how, what, when and why around every step in the process, talking about the repercussions of accounting rules, in audit and assurance."

Durksen says everyone at Bridgman & Durksen is on a first-name basis and there are no titles. “Senior partner? You would never hear that term here,” says Durksen, who began his career at a large accounting firm in Mississauga. “I hated the pyramid,” he says frankly, explaining that he left the firm despite the offer of a partnership that would have made him the youngest partner in the history of the firm.

Instead, Durksen joined the “Bridgman & Durksen family” in Niagara-on-the-Lake, where Ken Bridgman believed in a family-first culture. And part of that workplace culture is vigorous, open discussion on everything from standards to client relationships. Junior employees are encouraged to ask questions and express their opinions, as though sitting at the boardroom table is just like sitting at the dinner table.

There’s a very large ampersand hanging in the boardroom of Bridgman & Durksen to remind every employee to add value to their clients. “Don’t just do the financial statements, don’t just do the tax return commentary,” explains Durksen. “Always, always, always add more value. Don’t go to a meeting and do what they expect. Go beyond what they expect.

And that’s the key to how one small Ontario firm beat the odds and placed Alyce te Bokkel and Steven James Enns on the CFE National Honour Roll.

Accounting practitioners have long complained that the wheels of the CRA move too slowly. But in the case of NOAs, they're moving too fast
Opinion