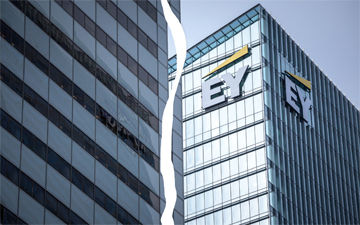 In part one of a three-part series, Canadian observers explain why audit independence is a regulatory factor behind the Ernst & Young split

TORONTO, Oct. 12, 2022 – A planned division of Ernst & Young Global Limited, which would include affiliate EY Canada, into two distinct, multidisciplinary organizations, could be profound according to Canadian observers of the accounting professsion. Should the split come to fruition, it will be viewed eventually as a pioneering move, predicts Wally Smieliauskas, a professor of accounting at the University of Toronto’s Rotman School of Management.

It is “the culmination of a process that’s been going on for 20, 30 years because consulting has become a bigger and bigger part of the CPA firms. But at the same time, it’s creating professional tensions because they could end up being perceived as auditing their own works,” says Smieliauskas. Separating the business lines is a good move for the accounting profession because it enhances independence, he says.

Even though EY appears to be the only firm contemplating a split at this time, Anup Srivastava, Canada Research Chair of Accounting, Decision-Making and Capital Markets and a professor at the University of Calgary’s Haskayne School of Business, believes “the writing is on the wall” and it is just a matter of time before the other Big Four firms will “all have to toe the line.”

Srivastava believes EY had no choice but to announce its intention to split into two companies. “No company makes decisions in a vacuum,” he says, noting that he believes that regulators in the United States and United Kingdom were the likely forces behind this decision.

Regulators from both countries have been vociferous about the need for greater auditor independence. The Securities and Exchange Commission in the United States updated its auditor independence rules in 2020, noting that “Commission staff has observed over years of consultations in which certain relationships and services triggered technical independence rule violations without necessarily impairing an auditor’s objectivity and impartiality.”

The Financial Reporting Council (FRC), the regulator in the United Kingdom, published revisions to its Ethical Standard in 2019, which included prohibiting auditors from providing recruitment and remuneration services, or having any part in management decision making. The FRC had been investigating EY’s audit of the financial statements of Thomas Cook Group 2018 fiscal year, prior to its travel giant company’s liquidation in 2019.

The FRC asked the Big Four firms to “agree to operational separation of their audit practices on this basis and to provide a transition timetable to complete implementation by 30 June 2024 at the latest.”

When a firm is offering assurance and audit services, there is an inherent conflict of interest with also providing advisory and consulting services to those same clients, says Srivastava. “I see no role for assurance and consulting services being mixed up,” adds Srivastava, who uses the analogy of a small town police officer whose job is to maintain law and order and issue traffic tickets locally. “If that person starts providing private security services to some rich households, then that person is likely to compromise on his or her job with respect to those households,” he notes.

Even though the police officer may be best suited to provide those private security services because they know the town and people and have the required training, this diverges from their original role to maintain law and order, he elaborates. Splitting the business lines is seen, from a regulatory perspective, to help with independence for a Big Four firm like EY.

The widely publicized collapse of energy giant Enron Corporation in 2001, as a result of an accounting and auditing scandal, also led to the collapse of global accounting firm Arthur Andersen. The firm had provided both consulting and auditing services to Enron, and its audit team gave Enron a clean report shortly before it was discovered that Enron’s financial statements actually concealed massive fraud.

In the wake of the Enron collapse, the Sarbanes-Oxley Act of 2002 represented the most enhanced securities overhaul in the U.S. since the Great Depression in the 1930s.

Sarbanes-Oxley introduced several reforms, including prohibiting audit firms in the U.S. from providing certain non-audit services, including consulting, to a U.S. audit client, as well as management certification of internal controls for financial reporting, among others.

Some large firms that had not already done so, including Deloitte Touche Tohmatsu and PricewaterhouseCoopers LLP, created separate units to conduct their audit and consulting functions.

In Canada, Ontario’s Bill 198, often referred to as Canada’s version of Sarbanes-Oxley, received Royal Assent in 2002 and went into force in 2003. Bill 198 addressed key issues such as management certification of internal audit controls, but did not require independence between the audit and consulting functions.

The Chartered Professional Accountants of Ontario’s Code of Professional Conduct does address this issue, but it also appears to leave some discretion to the professional accounting firm. In the section on Independence, Rule 204.3 – Identification of Threats and Safeguards, states:

A member or firm who is required to be independent…shall, in respect of the particular engagement, identify threats to independence, evaluate the significance of those threats and, if the threats are other than clearly insignificant, identify and apply safeguards to reduce the threats to an acceptable level. Where safeguards are not available to reduce the threat or threats to an acceptable level, the member or firm shall eliminate the activity, interest or relationship creating the threat or threats, or refuse to accept or continue the engagement.

In particular, one circumstance identified as a potential self-review threat was when there was “a member or firm performing services for an assurance client that directly affect the subject matter of the engagement.”

The Code’s guidance said that “Rule 204.4 describes circumstances and activities which members and firms must avoid when performing assurance and specified auditing procedure engagements because adequate safeguards will not exist that will, in the view of a reasonable observer, eliminate the threat or reduce it to an acceptable level.”

Each province has its own Code of Professional Conduct, where there might be some variation for certain rules.

In parts two and three of this series, Canadian Accountant looks at the revenue opportunities and brand challenges posed by the planned split at EY. A spokesperson for the firm said EY Canada did not with to comment further other than the public statements provided by its global and Canadian offices.

As part of his public statement, EY Canada Chair and CEO Jad Shimaly asserts: “This is an exciting step forward as we seek ways to embrace the changing landscape. We firmly believe we can redefine what’s possible and unlock greater long-term value for our people, clients and communities. Brick by brick, we’re laying the path for a bold, new future in Canada.”

In part one of a three-part series, Canadian observers explain why audit independence is a regulatory factor behind the Ernst & Young split
Profession

In part two of a three-part series, experts see the potential for EY to monetize ESG, AI, and crypto while maintaining audit independence
Profession

In the final part of a three-part series, why there may be no alternative to the splitting of audit and consulting at any of the Big Four accounting firms