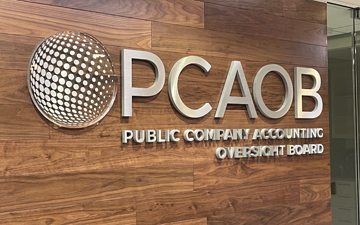 One of the largest accounting firms in Canada, Richter is a limited liability partnership (known in Quebec as a Société en nom collectif à responsabilité limitée or S.E.N.C.R.L.), with offices in Montreal, Toronto, and Chicago. The firm has an estate planning service called the Richter Family Office that was profiled in the Globe and Mail in 2016 and promoted through sponsored content this week.

The report does note, however, that the firm was non-compliant with AS 3101, The Auditor’s Report on an Audit of Financial Statements When the Auditor Expresses an Unqualified Opinion. In the audit reviewed, the firm’s audit report did not include an accurate identification of the applicable financial reporting framework under which the financial statements were presented.

As reported previously by Canadian Accountant, the PCAOB provides a level of transparency to stakeholders that is not provided by the Canadian Public Accountability Board (CPAB). The PCAOB publishes its inspection reports online and provides details related to firms and their compliance. CPAB began a public consultation on its disclosure practices this year.

This past Wednesday, PCAOB Chair Erica Williams addressed the 14th International Institute on Audit Regulation, which was attended by nearly 80 officials from audit regulators in nearly 40 non-U.S. jurisdictions. In her keynote address, Williams identified the US audit watchdog’s strategic goals, the third of which is strengthening enforcement, including “enforcement actions cross borders.”

Williams noted that the PCAOB has sanctioned 11 non-U.S. audit firms and associated persons in nine jurisdictions this year for violations of PCAOB standards and rules. That number included sanctions against three Canadian firms. As noted by Williams, “Most of those matters involved PCAOB-registered firms located in countries where the PCAOB and the home-country audit regulator have entered into cooperative arrangements and where PCAOB enforcement staff coordinated with our non-U.S. counterparts.”

Williams then recounted how the PCAOB is “approaching enforcement with renewed vigilance,” increasing both the frequency and cost of penalties for non-compliance, in a year in which the regulator broke its record for the largest monetary penalty ever imposed on an individual in a settled case — twice.

Williams also noted that the PCAOB is “rethinking how we identify cases, the types of cases we pursue, and the sanctions we impose. We will continue to use every tool in our enforcement toolbox, including working cooperatively with our international counterparts.”