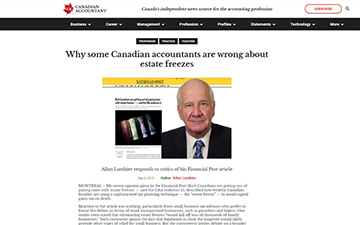 MONTREAL – My recent op-ed in the Financial Post (Rich Canadians are getting out of paying taxes with ‘estate freezes’ – and the CRA endorses it) and my subsequent article in Canadian Accountant (Why some Canadian accountants are wrong about estate freezes) seem to have hit a nerve. There have been a number of critiques of my suggestion that estate freezes should be eliminated.

The critiques generally focus on two constituencies — small businesses, and high net-worth families.[i] I comment separately on each below.

Critics argue that estate freezes are a valuable tool in succession planning for small business, and assist in the transition of the ownership of a business in an orderly manner. To illustrate, one of the critiques uses the example of incorporated bakers — Mr. and Mrs. Baker — with a company (BakeryCo) that has a fair market value of $2 million.[ii]

The Bakers are both age 65, and want to retire. The Bakers have three adult children, none of whom are interested in the business. But BakeryCo does have an employee (let’s call her Baxter) who is interested in purchasing the business. However, Baxter does not have significant financial resources. The critique sets out a suggested plan on how to proceed.

As the preferred shares are redeemed, the Bakers are taxed at dividend rates on the redemption amounts. If the shares are redeemed over five years, Mr. and Mrs. Baker will each receive annual taxable dividends of $200,000.[iii] Their tax cost under the plan will depend on their other sources of income, but (assuming Ontario residence) should total about $700,000.

The example in the critique is one that has been used in the past, and could conceivably be acceptable to all parties in certain circumstances. However, there are other alternatives to consider.

For example, assume that Baxter wants to immediately acquire 100 per cent ownership of BakeryCo, and assume full management of the business. She incorporates a new company (Holdco). Holdco purchases the common shares of BakeryCo for an interest-bearing promissory note of $2 million, payable over five years, with arm’s length terms and conditions. Holdco and BakeryCo amalgamate so that the interest expense on the note can be deducted against the business earnings, and the amalgamated company uses the cash from annual after-tax earnings of the business to repay the note.[iv]

The common shares of BakeryCo should (with proper planning) be “qualified small business corporation shares.”[v] Assuming that Mr. and Mrs. Baker each own 50 per cent of the common shares, they can both claim a “lifetime capital gains exemption” (LCGE) of $866,912 (2019 indexed amount) on the sale to Holdco. Without the freeze, the tax cost to the Bakers drops from $700,000 to $40,000.[vi]

As discussed immediately below, liquidity can be an issue in any situation where shares of a Canadian private corporation are sold or transferred. However, as this example illustrates, the LCGE should address this issue for the vast majority of small businesses.

Commentators advocating on behalf of high net-worth (HNW) families place most of their emphasis on liquidity. They argue that, if estate freezes did not exist, the cash taxes arising on death would — in many cases — force a family to sell the business.[vii]

The Income Tax Act imposes capital gains tax on death (unless capital properties are left to a spouse or spousal trust). As a result, I agree that liquidity can be an issue if the properties transferred on death include (for example) real estate, artwork, or shares of private corporations which have not accumulated an investment portfolio of any significance.

However, if estate freezes were eliminated, HNW families would continue to manage, plan for, and pay the taxes owing on death. The only difference is that the taxes would be due a few years earlier than would have otherwise been the case.

It is estimated that 46 per cent of Canadian families are $200 or less away from insolvency each month.[viii] Any time a country decides to impose tax of any kind (for example, personal income tax, sales tax and excise tax), liquidity issues may be exacerbated for taxpayers at all income levels, and must be planned for and managed. It does not follow, however, that taxes should never be imposed, or their payment enforced.

The fundamental policy debate is whether Canada should impose a death tax and, if so, in what form, at what rates, and with what exemptions.[ix] Against this background, estate freezes are more of a distraction than an issue of great significance.

It is time to have a dispassionate debate and consider some sensible tax policy alternatives with respect to taxation on death. That debate should take place as part of a comprehensive review of the entire Act by a panel of non-partisan experts.

Allan Lanthier, FCPA, FCA is a retired senior partner of a major international accounting firm. He provided tax planning services for more than 40 years, and has often been recognized as one of Canada’s leading tax advisors by the International Tax Review.

[i] For an example of a critique in the context of small business, see Kim G. C. Moody, Estate Freezes: Should they be legislated out of existence?, Canadian Accountant. For high net-worth families, see Peter Creaghan, Are wealthy Canadians really avoiding taxes with estate freezes?, Creaghan McConnell Group.
[ii] See Moody, Ibid.
[iii] The deemed dividends should not be “eligible dividends”, as that term is defined in subsection 89(1) of the Income Tax Act (referred to herein as the “Act”). The higher effective rates for non-eligible dividends will therefore apply.
[iv]  The promissory note held by the Bakers would be secured by the common shares of BakeryCo and, after the amalgamation, by the assets and operations of the business. In addition, Holdco might borrow a portion of the purchase price from a third-party bank, on the security of the value of the business. In this event, the Bakers would receive a combination of cash and a Holdco promissory note.
[v] Subsection 110.6(1) of the Act.
[vi] It is important that section 84.1 of the Act not apply. If applicable, section 84.1 would result in the Bakers receiving deemed dividends from Holdco, rather than proceeds of disposition, at the time of the sale. However, section 84.1 would only apply if the Bakers are dealing at non-arm’s length with Holdco, meaning in general terms that the Bakers and Baxter’s Holdco are acting in concert without separate interests (see, for example, Poulin and Turgeon v. The Queen, a 2016 decision of the Tax Court of Canada, and the CRA roundtable at the 2016 annual conference of the Canadian Tax Foundation). In this regard, it might be preferable for the arm’s length negotiations regarding the purchase and sale of the shares of BakeryCo to be documented.
[vii] See Creaghan, supra footnote 1.
[viii] January 2019 report from insolvency firm MNP Ltd.
[ix] As alternatives, most countries consider either estate and gift taxes, or capital gains tax on death.

And another thing ... a few more comments from CPAs on estate freezes