From Lysyk to Ford: An accountant’s constructive criticism on COVID-19 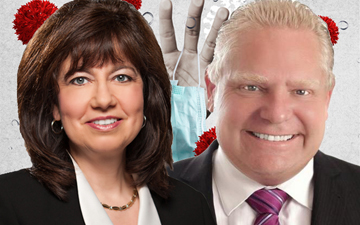 TORONTO, Jan. 18, 2020 – Bonnie Lysyk, FCPA, FCA, may be the most well-known accountant in Canada. As Auditor General of Ontario, she has earned the enmity of provincial politicians from all parties, including that of Ontario Premier Doug Ford. Upon the release of Lysyk’s report on the government’s initial response to COVID-19, Ford stated angrily, “There’s a big problem with an accountant that starts giving me health advice.”

The Auditor General’s report stated that, at the onset of the first state of emergency, laboratory testing, case management, and contact tracing for COVID-19 were still not being performed in Ontario in a timely enough manner to contain the virus’s spread. For example, “between March and August 2020, the average amount of time between collecting a specimen and contacting the person who tested positive and to start case management and contact tracing was more than four days.”

The report also noted “The Ministry of Health did not take immediate actions to ramp up testing capacity, despite warnings by Public Health Ontario and experts in February 2020. A formal Provincial Diagnostic Network was not developed until one month later to oversee and co-ordinate laboratory testing between participating laboratories.”

The report stated there were more than 1,000 instances where a person who tested positive was contacted by the public health unit more than 14 days after specimen collection. As a result they missed the 14-day isolation period when that person was most infectious.

Between March and August 2020, it took an average of 2.75 days to collect a specimen and begin case management in most provincial regions, and even longer in urban and densely regions, with Toronto topping the list at 5.75 days. Ministry of Health targets for having 60 per cent of lab tests completed and results reported within one day of specimen collection, and 80 per cent of such tests completed within two days of collection were not met. The one day figure was only at 45 per cent, and the two day figure was 77 per cent, the audit found.

“Due to the delay in expanding lab capacity, Ontario took one month longer than Alberta and three weeks longer than British Columbia to allow anyone with COVID-19 symptoms to be tested. As a result of this delay, as of August 31, 2020, based on Public Health Ontario’s analysis, we estimated about 119,000 Ontarians may have contacted COVID-19 and were not tested for it. This meant that case management and contact tracing were not done on these cases,” said the report.

Moreover, “Ontario did not meet its laboratory testing capacity target of 50,000 tests per day either by the initial planned date of July 2020 or by the revised target date of September 2020. Hospitals told us that they did not aggressively increase their laboratory testing capacity because the information they received from the Ministry about funding to support more testing was unclear on the amounts and the timing,” the report noted.

The audit also found that only a very small percentage of international travellers arriving in Ontario were followed up with by the provincial Ministry of Health after the federal government announced in an emergency order last March that all travellers entering Canada by air, sea or land needed to self-isolate for 14 days.

“On April 13, 2020, the Ministry began contacting all the travellers included in reports received up to that date to explain what self-isolation involves for the travellers, how they should monitor for COVID‑19 symptoms, and how to access medical care, testing facilities and other support services, as needed,” the report said.

Various reasons were cited for the missed connection, including limited personnel at the Ministry of Health to contact the travellers during their 14-day self-isolation period, travellers not responding to phone or e-mail messages from PHAC, and errors in the traveller data provided to PHAC.

Moreover there were indications the Ministry’s overall numbers were very low because it did not receive complete information. The report noted that Statistics Canada identified approximately 2.5 million international travellers having entered into Ontario between April and August 2020. That meant only a little over nine per cent of travellers [233,300 out of about 2.5 million] were initially accounted for.

The audit also found some positives in the government’s COVID-19 response. For example, Lysyk wrote that the “decision-makers, the health-care system and the public made every effort so that Ontario’s health system would not be overrun in the first wave.”

She also noted that members of the public had been provided, through government communications and extensive media reporting, with the information required to protect themselves against acquiring the virus.

Lysyk told Canadian Accountant her audit team found that Ontario’s hospitals had been doing some background preparation in anticipation for something like COVID-19 hitting the province. “They were thinking about what the demand would be on their system, knowing that they’re operating already at a fairly high occupancy rate in the hospital system. So we saw that as being very good,” she said.

Furthermore, noted Lysyk, “we know that all attempts were made to obtain PPE. I think everybody was caught off guard but they did immediately spring into action to try and obtain PPE as quickly and efficiently as possible.”

The government also expanded virtual care and online learning as fast as they could, said Lysyk. “But it’s like anything. If your systems aren’t ready to come into action and work for you the way you need them when there’s an emergency, it takes longer to get started up,” she added.

So, while there were good actions taking place, other actions had to be taken to compensate for old IT and for systems not being ready to handle moving everybody to either become educated or work remotely. For example, only 17 per cent of Indigenous people in Ontario have Internet access so that made it more difficult for e-health and for e-learning, Lysyk elaborated.

The importance of Lysyk’s report on the province’s COVID-19 response was to communicate that there are some good changes that can be made to make things even better, explained Lysyk.

“And so our intent in conducting this work was not to make it difficult for people. It was to foster positive change by highlighting areas needing system and process improvements. Highlighting needed improvements sooner than later could lead to positive systemic changes that would benefit decision-makers.”

Lysyk provided an example. “When we looked at the data, we truly appreciated how important testing is, how important case management is, how important tracking and tracing is. Studies have shown that to limit the spread of COVID-19, you need to provide results [to] the individual who tests positive within 24 hours. You also need to contact them and start their case management within 24 hours and then make sure you know who they’ve come in contact with very quickly as well, to reduce the spread of COVID-19,” she added.

Ontario is now in its second state of emergency since the pandemic began. Modelling data points to the daily COVID-19 mortality rate doubling from 50 deaths per day to about 100 deaths per day between mid-January and the end of February. Whether Premier Doug Ford learned anything from the Auditor General’s criticism remains to be seen, but Lysyk’s accounting of the first wave of the crisis is on the public record.

The Auditor General of Ontario has a broad mandate to exercise judgment. That includes reporting on the province's pandemic response
Profession