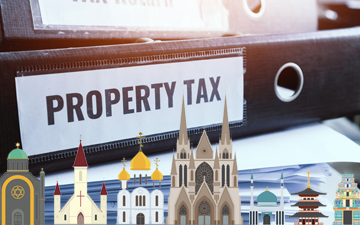 FLK owned two fully exempt temples and a partially exempt International Centre in the Greater Toronto Area. In 2013, FLK sought exemptions for several other consecrated properties throughout Ontario on which it conducted Taoist Tai Chi classes ("Satellite Sites") together with the rest of the International Centre lands, consisting of an overflow campground area, a retail sales area and a Contemplative Garden.

The rejection of the application for the retail area (which sold relatively few religious items and was primarily devoted to "selling things") is as expected.  The campground area was similarly not exempted with the comment that "[w]orship requires one to be awake." The Contemplative Garden area, while used for personal prayer, was treated in the same way convents, monasteries, some retreats and manses have been treated in the past, with areas devoted primarily to acts of private prayer and meditation not considered places of worship. The more interesting analysis arises from the judicial treatment of the arguments about the Satellite Sites.

It is clear that with respect to the Satellite Sites, FLK was always going to be somewhat constrained by its own operational decisions and factual admissions. The "Undisputed Facts" included the fact that the Tai Chi classes at the Satellite Sites were led by volunteers who were neither religious leaders or teachers, nor even required to be Taoists or have any level of Taoist knowledge. The Satellite Sites were not categorized by FLK itself as "Temples" and beginner Tai Chi instructions were limited to physical movements only, and did not include any prayer or chanting (i.e., more clearly traditional religious or worshipful activities).

FLK attempted to overcome these factual limitations by filing a religious expert's affidavit discussing how FLK's Tai Chi movements alone could be considered a religious practice and are worship to FLK. Interestingly, and practically instructive, we discover that MPAC's primary representative did not read that affidavit until well into the court process, as "he was not interested in it" and limited his research to YouTube videos, Google searches, the FLK website and news articles about community opposition to one of the FLK sites. He had already formed his opinion that the Tai Chi performed at the Satellite Sites was no different than Tai Chi taught at Wu Ying Martial Arts Studio, without instruction or understanding of "movement meditation."

The registration forms signed by participants were produced and there was scrutiny of who was entitled to participate, on what conditions and how the payments were characterized (variably as membership dues and participant contributions).

Ultimately, these facts led the application judge to the primary deciding factor in respect of the Satellite Sites, namely, that while "the practice of Tai Chi is integral to FLK religion, the opposite is not necessarily so."

Clarification of the law

Both parties cited case law in support of their positions.  MPAC relied upon judicial decisions holding that places which facilitate private prayer or evangelism alone, such as convents, manses, some youth centres, office spaces and summer camps, do not constitute places of worship, and that there is a distinction between classes run by volunteers and certified teachers, with the former being indicative of only a recreational, health or fitness objective.  FLK relied on a decision in Quebec that its properties there, used in similar ways, were exempt from property taxation and upon decisions that emphasize consideration of the primary purpose of the activities being carried out on the land and that do not require continuous active use for worship activities.

There was little discussion in the application judge's decision about the potentially conflicting case law.  However, the Divisional Court's decision elucidates the concepts more clearly.

Firstly, it clearly recognized that there is a distinction between the use by a religious organization for evangelism purposes as opposed to its use as a place of worship, with the crucial determination being what constitutes worship. "Consecration" of a site itself and an argument that "if we say it is worship, it is," will likely never be conclusive.  Instead an objective analysis is required, assessing whether any religious expression and activities carried out constitute worship.

Here, the Divisional Court found there was sufficient evidence to contradict the "subjective evidence of the FLK expert" and to find that the activity did not fit within the four corners of worship. The Divisional Court declined to engage in any further analysis of the evidence to try and come to a different view of that evidence. As the author has said before, the nature of administrative law constrains what an appellate court can do on appeal. It is best to carefully plan how clearly worship and non-worship activities are distributed within a religious organization's buildings or lands and how information about those activities is presented at the first instance of decision-making. In effect, the first kick at the can is the most important, as the second and third kicks will be constrained.

The Divisional Court makes it clear that a more subjective, human rights approach to assessing what worship or religious observation is, does not accord with the statutory scheme, which inherently differentiates between types of religious conduct and activities to form the basis for whether and what level of tax exemption will be granted. In other words, it recognized that the Assessment Act  grants different exemptions for different types of religious experiences and actions. The decision references the need to balance two separate social goals (supporting certain types of religious observances versus raising funds for government expenses) as the basis for not strictly ensuring the exemption is available to all religious activities which can be subjectively claimed to be worship. Judicial restraint in arbitrating religious doctrine or disagreements about what actions constitute a particular type of religious activity on the part of a particular religion will not, in the Divisional Court's view, constrain a court's ability to assess whether specific types of religious observances occur as the primary purpose of the property.

Perhaps the most interesting aspect of the appeal was FLK's assertion that assessing the facts and evidence through a Judaeo-Christian lens is impermissible and an error of law. There is almost no doubt that MPAC's primary representative did assess the facts and evidence through such a lens.  The Divisional Court found, however, that the application judge, while rejecting the assertion that the activities are worship if the religious organization's doctrine makes it so (what it calls the subjective line of argument), properly assessed the evidence to determine the primary purpose of the area under consideration.

This case is likely far from being concluded at this time. We understand that leave to appeal to the Ontario Court of Appeal is being sought. Nonetheless, some practical conclusions can be drawn.

An accountant’s guide to property tax assessments across Canada

There are key differences in provincial approaches to appeals
Practice

When an accountant’s client is paying too much property tax

Are your clients leaving money on the table?