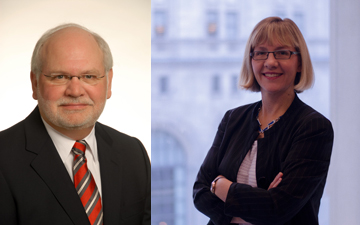 TORONTO, Jan. 31, 2018 – The Canadian Public Accountability Board (CPAB) has appointed Carol Paradine as its new chief executive officer, effective March 1, 2018. Paradine succeeds Brian Hunt, a founding director of CPAB who was appointed chief executive officer in January 2009, and who is now retiring. CPAB is responsible for the regulation of public accounting firms that audit Canadian reporting issuers and operates independently from the provincial regulatory authorities who oversee the accounting profession.

"On behalf of the board, it is my pleasure to welcome Carol to this role," said Nicholas (Nick) Le Pan, CPAB Chair. "We look forward to Carol's leadership in ensuring CPAB remains a world class audit regulator as it continues to drive improvements in the quality of Canadian audits."

Paradine previously held the position of managing partner of leadership development and succession with Deloitte Canada. "I am excited about the opportunity to join CPAB and to drive its mission to contribute to public confidence in the financial reporting of public issuers," said Paradine.

Hunt's tenure was notable for the launch of the Audit Quality Indicators pilot project and the development of the auditor oversight inspection and reporting process, among other initiatives. Canadian Accountant will publish an interview with Mr. Hunt next month. The board of CPAB expressed its thanks to Hunt "for his nine years of service as CEO and his immense contribution to building the organization during that time."