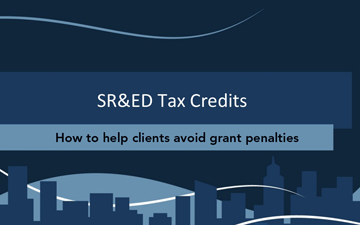 Vancouver – Claims for research and development tax relief in the form of SR&ED tax credits inevitably focus on what has been spent. However, if you’re a Canadian accountant supporting your client with an SR&ED claim, remember this: It can also be crucially important where that money has come from in the first place.

When a client company wins grant funding, it can have a dramatic impact on their claim. This is because — as a general rule — tax relief can’t be claimed on SR&ED expenditure that has been funded by grants or assistance, even if it was from a non-governmental source.

On the other hand, however, the total amount of deductible SR&ED expenditures for each project is reduced by the value of any assistance that could reasonably be said to be in respect of R&D. As we know, not all expenditure related to R&D is eligible for SR&ED tax relief. This means there’s a danger that grant-funded spending on activities that don’t qualify for SR&ED tax credits still reduce a company’s overall claim.

The way to avoid this is to ensure that the wording of each grant explicitly addresses what the funding is for, making clear where it is, in fact, only intended to fund activities that do not qualify for SR&ED tax relief.

For example, if a grant was awarded to fund capital expenditures, which are not eligible for SR&ED tax credits, then this should be clearly stated so that it cannot be misinterpreted as funding intended for wages, which are eligible.

If a grant is only intended to partially cover ineligible expenses, then it should be made clear what portion of the assistance applies to those activities.

Wiggle room — is it a grant or loan?

Unfortunately, it is not possible to employ different wording to reclassify a grant as another form of funding. If the government, for example, provided financial assistance and included a condition that the money would be repaid in the form of royalties if profits were earned from the project, then the Canada Revenue Agency would interpret that as assistance rather than a business loan of some kind.

Such an arrangement is often referred to as a “forgivable loan,” as the recipient may never have to pay any of the money back unless certain conditions are met.

An example of such a loan is the Canada Emergency Business Account (CEBA), which is a key plank of Canada’s Covid-19 Economic Response Plan. It is an interest-free loan of up to $40,000 — 25 per cent of which will be written off if 75 per cent of the loan is repaid by December 31 2022. Companies could therefore save themselves up to $10,000 by repaying by this deadline. The loan itself does not qualify as “assistance,” but the written-off amount does. So it would be this forgiven debt of up to $10,000 that reduces a company’s SR&ED claim rather than the original CEBA loan itself.

In terms of fiscal periods, accountants will need to apply any forgiven loan amount to 2020’s ITC calculation, as that is the year it was taken out.

The cost of inaction

One final trap to avoid is where a company is entitled to assistance but, for whatever reason, doesn’t take it. If a firm is entitled to receive assistance but chooses not to take advantage of it, its total claimable SR&ED costs will still be reduced by the value of the unexploited grant.

So companies can lose out twice over and end up severely out of pocket. Whether you’re a sole practitioner or a Canadian accounting firm, it’s imperative that you find out what is available for your client.

Richard Hoy is president of specialist R&D tax relief consultancy Catax Canada. To find out if a client could claim more SR&ED, contact Richard by email at Richard.Hoy@catax.com.

The government will be looking out for those attempting to abuse the system, says David Rotfleisch
Partner Posts

Bolstering the balance sheet through life insurance for CCPCs