The CPA CFE Capstone 1 cases are changing. Here’s what you need to know 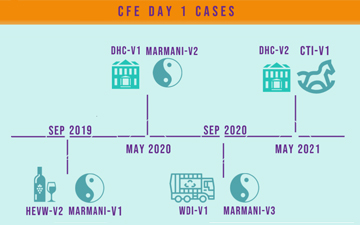 Normally, Capstone 1 cases are examined once per year and offered in a maximum of two versions. For example, the Marmami Inc. (“Marmani”) case was first introduced in the September 2019 CFE and scheduled to be offered the second and final time in the September 2020 CFE. Now, the Marmani case will be examined three times and offered in three versions. This is a welcomed change for the September 2019 CFE writers, given that writers will now have the choice of writing the Marmani case in both the May and the September 2020 CFEs. Without this change, unsuccessful writers who wished to re-attempt the May 2020 CFE would need to re-learn the new case, requiring additional study time, preparation and practice.

In summary, for the May 2020 CFE, candidates can choose from the following cases:

For the September 2020 CFE, candidates can choose from the following cases:

For the May 2021 CFE, candidates can choose from the following cases:

If you are a repeat writer from the September 2019 CFE, you have two choices for the May 2020 CFE:

I recommend registering for Marmani-v2, as you are familiar with the Marmani case and you have already had at least four practice attempts with it (three in the Capstone 2 module and one in the 2019 CFE).

If you are a candidate who is challenging the exam for the first time, such as an international CPA, and you are not taking the Capstone 1 module, I suggest registering for Marmani-v2. The Marmani case will repeat at the September 2020 CFE, thereby giving you another attempt at the same case, should you need to re-write it.

All CFE Day 1 cases are the same length and complexity, otherwise.

From Capstone 1 to CFE Day 1

The CFE Day 1 cases are based on the Capstone 1 cases: They are the same companies some years in the future or they have taken a new strategic direction. CPA Canada offers two versions (three for Marmani, as noted above) of the Capstone 1 case in CFEs, to allow repeat writers to re-attempt the same case, without the need to re-learn a new case.

Candidates I have coached in the current and previous Capstone 1 modules have expressed a great sense of achievement after passing this module. The module provides an opportunity to learn and apply professional business writing techniques, oral communication skills and teamwork collaboration skills. You should approach both the Capstone 1 module and the Day 1 of the CFE with a strong understanding of the CFE structure and a solid study plan.