Taxing the Internet: An overview of Canada's approach to taxing the digital economy 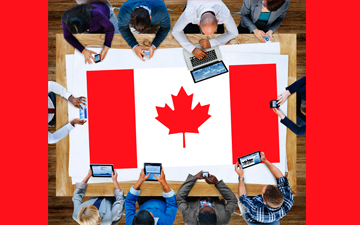 With ever-increasing national debts resulting from COVID-19 efforts1 and the move towards a global digital economy, the fair taxation of multinational corporations such as Google, Facebook, Apple and Amazon has become an issue of increasing global interest.

While it may be difficult to define, the digital economy is of great importance to the global economy, with global e-commerce sales jumping to an estimated US$26.7 trillion in 2019, equivalent to 30 per cent of global gross domestic product (GDP) that year. Much of this value is concentrated in the top four companies: Google, Facebook, Apple and Amazon, which are not only the four largest corporations in the world but also had a combined revenue of approximately US$773 billion in 2019. In response, global leaders at the OECD, EU and G7 have taken it upon themselves to attempt a multinational and domestic approach to the problem, even though the digital economy is inherently flexible and movable, making it inconsistent with the principles underlying the current international tax system.

Until recently, Canada had no federal or cross-provincial framework for taxing the digital economy and the multinational corporations that do business in Canada. In recent years there has been an ever-changing patchwork of provincial rules, spearheaded initially by Québec and Saskatchewan but also taken up by British Columbia and Manitoba. In the Federal 2021 Budget, the Liberal government confirmed its intention to: (1) move forward with its proposal to implement a domestic digital services tax (DST) as of Jan. 1, 2022; and (2) implement the so-called simplified registration regime for GST/HST registration by non-residents, effective July 1, 2021.

The DST, which was originally proposed in the Fall Economic Statement 2020, would apply at a rate of three per cent on revenue earned from certain digital services "reliant on the engagement, data and content contributions of Canadian users." Such services would include:

The proposed DST will apply to "large" tech-based businesses with global revenue of €750 million or more from all sources and revenue of more than C$20 million per year associated with Canadian users. The DST liability might be tax deductible in certain circumstances (e.g., where it is incurred for the purpose of earning income subject to Canadian income tax), but would not be eligible for a credit against Canadian income tax payable.

The same requirements to register and collect GST/HST will apply to all supplies of short-term accommodation by private residential property owners facilitated by digital platforms with annual supplies to consumers in Canada of more than C$30,000.

Please refer to BLG's budget summary and update on the GST/HST rules to learn more about the updated GST/HST regime for non-resident vendors.

Provincial approaches to the digital economy

Some provinces still impose their own provincially administered sales tax. Each province has or is currently adapting their sales tax regime to capture digital economic activity.

Québec: Québec's sales tax legislation largely mirrors the GST/HST. Québec already implemented their own sales tax regime for non-registered non-residents of Canada selling services and intangibles to Québec consumers, and for non-registered Canadian businesses outside of Québec selling services, intangibles and personal property to consumers. These rules also include compliance obligations for online marketplaces similar to the GST/HST rules discussed above. Québec has announced it will modify its rules to reflect the simplified registration regime, including implementation of online marketplace rules.

Manitoba and Saskatchewan: These provinces administer sales taxes that are structured similarly to each other and to U.S. sales and use taxes. Effective Jan. 1, 2020, Saskatchewan requires online marketplaces to collect sales tax on behalf of non-resident vendors making sales through their platforms. Manitoba has announced similar rules, effective Dec. 1, 2021.

British Columbia: Effective April 1, 2021, Canadian businesses outside of B.C. selling tangible property to persons in B.C. no longer have to solicit sales to trigger registration obligations. Instead, registration is required after the vendor exceeds a C$10,000 sales threshold. A similar rule applies to software and telecommunications sales for all vendors outside B.C. (Canadian and non-Canadian), where the soliciting requirement was also removed and replaced with a $10,000 sales threshold. B.C. also requires online accommodation platforms to collect sales tax on behalf of accommodation providers. B.C. remains the only jurisdiction without special sales tax rules for online marketplaces.

On the international stage, the G7 financial ministers, including ministers from Canada, the United States, Britain, and other leading nations, came to a landmark agreement to pursue higher global minimum taxation on large multinational businesses at the June 5, 2021 summit. The agreement will see the large global economies agreeing to implement and enforce a minimum global corporate income tax rate of at least 15 per cent and provide for rights for nations to tax at least 20 per cent of any profit above a certain profit threshold from revenues associated with the jurisdiction. The agreement is intended to facilitate a more equitable distribution of the corporate income tax of multinationals, since companies would no longer be able to position their global headquarters and corporate profits in a low tax county. It will also reduce the effectiveness of tax havens throughout the world, further incentivizing corporations to retain their profits, and thus pay tax, in the countries in which they do business.

The new regime will require corporations to pay income tax in the jurisdictions where they do business and create value. Fundamental to this approach is the recognition that the digital economy is uniquely different than economies of the past — value generation and tax nexus can no longer be determined based on the location of profit-making apparatuses like brick-and-mortar stores, management offices or manufacturing plants. Instead, value is created in each jurisdiction in which customers interact with businesses for the provision of goods and services. However, this agreement is only a starting point. Critical details must be agreed to, such as the scope of businesses that trigger these rules and the division of tax revenue between jurisdictions. Additionally, the agreement noted that work will need to be done to reconcile existing or proposed domestic digital tax rules and future multilateral agreements.

As the details of the agreement have yet to be confirmed, Canadian Finance Minister Chrystia Freeland announced that Canada would move forward with the implementation of the proposed DST as of Jan. 1, 2022. While we expect the provincial, federal and international digital taxation landscape to experience continued volatility over the coming years and eventually reflect this multilateral approach, the current patchwork of provincial and federal rules, expanded as described above, will likely remain in place on an interim basis. It will be important for all business operators to review the proposed and enacted legislation in detail to reconsider whether these new rules affect their current compliance obligations. The chart below offers a summary of these new rules for each jurisdiction.

Footnote
1. For example, Canada's national debt is set to exceed the trillion-dollar mark by the end of 2021.