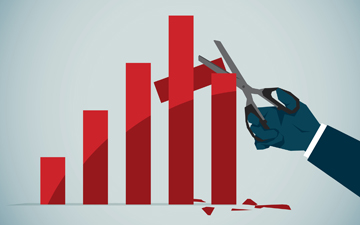 Toronto, April 11, 2018 – A majority of Canadian accountants say Canada has become less competitive than the United States in the past year as a place to invest and do business. Despite a strong Canadian economy with the lowest jobless rate in more than 40 years, anxiety appears to be the theme of the latest Business Monitor report from the Chartered Professional Accountants of Canada.

“Uncertainty is dominating, especially with growing protectionist trade sentiments and tax changes in the U.S.,” says Joy Thomas, president and CEO, CPA Canada. “Canadian business leaders are looking for assurance from the federal government that the situation is being properly monitored to allow a course of action to be developed that will keep Canada competitive.”

More than two-thirds (67 per cent) of Chartered Professional Accountants in leadership positions say Canada is less competitive, with economic optimism dropping to its lowest level since 2016. However, CPAs appear to be taking a neutral rather than pessimistic stance, as the ratio of optimism to a neutral stance has largely flipped from Q4 2017 (48:36) to Q1 2018 (34:47).

The survey, completed by 408 CPAs in C-suite positions, was conducted from March 13 to March 29, 2018. On March 8, U.S. President Donald Trump announced that Canada and Mexico would receive initial exemptions from tariffs on U.S. steel and aluminum imports, originally announced on March 1, 2018.

CPA Canada’s 2018 Q1 Business Monitor came just days after Statistics Canada reported a higher-than-expected jump in job creation for March, with the unemployment rate unchanged at 5.8 per cent, matching the lowest number since 1976. Employee retention (30%) and a lack of skilled workers (24%) are high among the factors impacting Canadian business planning for the upcoming year.

“Canada’s labour market rarely has been stronger,” reported the Financial Post in April, with the unemployment rate below 6 per cent for five consecutive months, an unprecedented record. Bank of Canada Governor Stephen Poloz is optimistic that a Canadian labour market running at virtually full capacity will encourage business executives to expand.

Evidence from CPA Canada’s Business Monitor suggests otherwise. Coupled with the anxiety of U.S. protectionism, 84 per cent of CPAs agree that a detailed assessment of U.S. federal tax reforms is “urgently required.” Ninety-three per cent say the analysis should be made public soon after completion.

Further, uncertainty is likely to continue throughout Q2, with ongoing NAFTA negotiations and newly announced retaliatory trade measures between China and the United States.