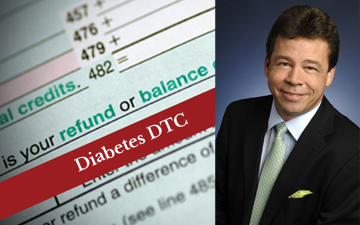 OTTAWA, Jan. 23, 2018 – Chartered Professional Accountant Everett Colby, who lives with Type 1 diabetes, is happy with the Canada Revenue Agency’s recent decision to return to the pre-May 2017 criteria on disability tax credit (DTC) applications. “Kudos to whoever was lobbying on the unfairness of this. It’s nice to see that [the CRA] can admit when something just isn’t right,” he says.

Colby is a principal and tax, litigation and forensic accounting partner with Colby McGeachy Professional Corporation of Almonte, Ont. He has qualified for the DTC since 2004, applying on three-year intervals so the CRA can periodically review the restrictive nature of the disease as it affects him. He was previously covered until the end of the 2016 tax year, and recently had it renewed for six years, until 2022.

“I take insulin at least four times a day. I indicated the time as being 15 minutes per episode of having to take an injection,” says Colby, who explains the difficult process involved in not just having to prepare the dosage, along with the swabbing and other tasks, but also the logistical difficulties with having to find some privacy.

For example, if he is in a business meeting, that requires leaving the meeting to find a restroom. The same requirement applies to blood glucose monitoring, which also takes 15 minutes per occurrence about four times a day, adding up to another hour, for a total of at least two hours daily. “With all of those things combined every day, it’s not difficult to get over the 14 required hours per week,” stresses Colby.

Accounting for the cost of diabetes

There are also significant financial costs involved with managing diabetes. “Type 1 diabetes costs Canadians on average up to $15,000 a year to manage out of pocket,” says Kimberley Hanson, director of federal affairs for Diabetes Canada in Ottawa. Hanson notes that, even though there is universal health care, it doesn’t cover insulin, needles, test strips and other equipment necessary for monitoring.

The DTC is the difference between being able to afford treatment or not for many Canadians. A lot of families have members suffering from Type 1 diabetes who are living at or below the poverty line, she explains.

Diabetes medication, including tests strips, are becoming more expensive and not all health insurance plans cover it. Some plans might only cover partial costs. Some people don’t have insurance plans to cover drug costs, says Colby. He notes, for example, that he needs to test his blood glucose at least four times a day, for which a box of 100 strips, that only last about two to three weeks, costs $140.

“This isn’t something that’s done by choice. Let’s remember that this disability tax credit wasn’t really offered to people with Type 2 diabetes they can control through diet and that kind of stuff. This is for people like myself who are Type 1. This isn’t going away. It doesn’t get better. And if I don’t do the treatments I’m going to die,” he says.

In this, our three-part series on the CRA’s reversal to the way it assesses whether diabetics qualify for the DTC, we noted that the agency’s initial revision in May 2017 drew a sharp response from Diabetes Canada and other health-care groups. “It’s important to note that there has been no change to the eligibility criteria for the DTC related to life-sustaining therapy,” states CRA spokesperson Karl Lavoie.

Jason Kingston, a principal with DSK LLP in Kitchener, Ont., agrees that no change has been made to the eligibility criteria because, he notes, the eligibility requirements for the DTC are spelled out in the Income Tax Act, to which there has been no change.

“The letters CRA sent out are just administrative tools, not legislation. They are [just] how the CRA gathers information to determine if someone qualifies,” he says.

Diabetes Canada has seen about 400 applications from taxpayers with Type 1 diabetes approved for the DTC since December 1, 2017, according to Hanson. About two-thirds of those individuals had their DTC applications initially rejected between May and November, 2017. The remaining one-third had been “frozen,” meaning a decision had yet to be made prior to approval.