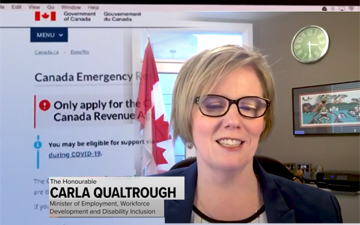 This item was updated today at 4:15 p.m. to include the official announcement.

OTTAWA, Feb. 9, 2021 – The federal government will waive repayments for self-employed Canadians who received the Canada Emergency Response Benefit (CERB) despite being ineligible. Employment Minister Carla Qualtrough made the announcement today, less than a month after stating forgiveness for those who didn’t qualify “wasn’t on the table,” through a press release:

"Today, the Government of Canada announced that self-employed individuals who applied for the Canada Emergency Response Benefit (CERB) and would have qualified based on their gross income will not be required to repay the benefit, provided they also met all other eligibility requirements. The same approach will apply whether the individual applied through the Canada Revenue Agency or Service Canada."

As reported by Canadian Accountant, many self-employed Canadians applied for CERB due to confusion by government resources that incorrectly stated gross, rather than net income, determined eligibility. The confusion was amplified by agents at the Canada Revenue Agency, CERB applications and government webpages.

In his daily COVID-19 briefing, Prime Minister Trudea addressed the matter: "I know that some individuals have pointed out some inaccuracies in the information pertaining to the net and gross income requirements to get the CERB but we're going to clarify the question. People who applied for the benefit based on their gross income instead of their net income — as long as you meet the other eligibility criteria, you will not have to return those CERB payments."

Last December, the CRA sent “educational” letters to taxpayers who might be required to repay CERB subsidies, encouraging taxpayers to repay CERB amounts by Dec. 31, 2020. The confusion led to both politicians and pundits, including many in the Canadian accounting profession, urging the government to admit its mistake and waive repayments for Canadians caught in the confusion. The Canadian Federation of Independent Business also supported waiving the repayments.

Later that month, the CRA admitted its mistake in a statemen to media: “the Government of Canada acknowledges that communications on this topic were unclear in the first days after the CERB was launched. This includes both the CERB webpages, and the information provided to call centre agents.”

While pandemic benefits are taxable—a message repeated by the government and the CRA—many Canadians are expected to owe taxes to the government that they cannot pay at the current time. They will have until April 30, 2022 to repay the debt.