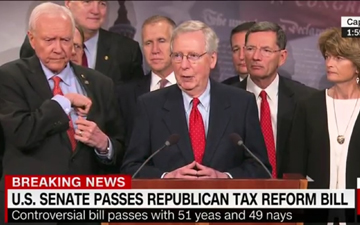 TORONTO, Dec. 2, 2017 – A massive new tax bill approved by U.S. Senate Republicans early Saturday morning may have widespread implications for Canadian business. The U.S. Senate narrowly approved, by a vote of 51-49, $1.4 trillion of tax cuts that includes permanent tax cuts to corporations and the wealthy, and tax cuts with sunset clauses to the middle class. Non-partisan and independent groups say the plan will add at least $1 trillion to the U.S. deficit in the next 10 years.

At the centre of the plan is a plan to cut the corporate tax rate from 35 per cent to 20 per cent, once the Senate and House of Representatives have reconciled their respective versions of the legislation. The corporate tax cut has long been advocated by representatives of both parties to encourage companies to bring home trillions of dollars of offshore profits, particularly helpd by pharmaceutical and technology companies.

Early plans for the legislation coupled the tax cut with a requirement to repatriate overseas profits by a yet-to-be-determined date. However there is no indication as of yet that the plan, which included last-minute rewrites on the floor of the Senate, includes such a requirement.

“We expect that if the U.S. is successful in lowering its corporate tax rate, which is largely viewed as an imperative, that is going to improve the competitiveness of U.S. companies vis-à-vis companies in other jurisdictions,” said Dennis Metzler, a Toronto-based U.S. tax partner with Deloitte Canada in Toronto, in an interview with Canadian Accountant.

Some Canadian analysts were concerned about a possible though challenging rate cut to 15 per cent. The effect of a 20 per cent cute would be more muted.

“If you’re at a 20 per cent rate, then you layer on state taxes — that probably puts you pretty close to what the Canadian/Ontario rate is. So it would end up almost being a push between the countries,” says Dennis Metzler, a Toronto-based U.S. tax partner with Deloitte Canada in Toronto.

But the rate reduction will still be welcomed by U.S.-based businesses and Canadian or international companies wishing to do business in the U.S.

“It would take some of the heat off companies that today employ elaborate planning to avoid having profits taxed in the U.S., since the higher U.S. rates drive up the overall effective tax rate on an organization’s earnings. They may not be so focused on trying to minimize U.S. taxation,” adds Metzler.

No Democrats voted for the bill, but they were unable to block it because Republicans hold a 52-48 Senate majority. Democrats have criticized the bill as a give-away to corporations and the wealthy, financed with taxpayer debt.