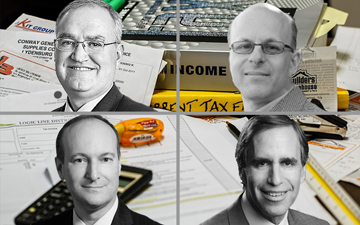 In part three of our five-part series, Canadian economists weigh in on post-pandemic taxation

OTTAWA, Nov. 26, 2020 – Will taxes need to be raised to pay down the COVID-19 government debt and balance the federal budget? Taxation changes are being openly discussed among Canada’s leading economists.

“I would argue that given the magnitude of debt we’ve accumulated, it’s not realistic that higher taxes are going to solve it,” says Craig Alexander, chief economist with Deloitte Canada in Toronto. “I think the most constructive way of addressing the fiscal deterioration is to put in place a very strong pro-growth agenda that will help the economy to grow faster, creating more income, which will allow the debt-to-GDP ratio to fall, because you’re dividing the total amount of debt by the size of the economy.”

A faster growing economy can also generate additional tax revenues to allow the country to rebalance its finances, Alexander explains.

According to Avery Shenfeld, managing director and chief economist at CIBC World Markets, now is not the time or place to think about hitting the economy with additional taxes, as government revenues are currently depressed by high unemployment and weak corporate profits. When the economy recovers, revenues will make a big comeback and spending could decline very sharply in 2022 and 2023.

“We have to be careful to see whether, in fact, the revenue take of government really does need to be increased,” he advises.

Alexander is looking at a similar timeline. “If the economy and unemployment is only going to get back to pre-COVID levels in, let’s say 2022 or 2023, the earliest you would be talking about doing anything on the tax front to reduce the deficit is probably something like 2024 or 2025,” he says. “A lot of people I talk to are worried that taxes are going to go up. The answer is if they go up, they’re not going up for several years.”

Alexander notes that, after this crisis, when the economy is again growing at a strong pace and governments are going to look at how to rebalance their finances, much of the deficit will automatically reduce because programs like the wage subsidy will end. But there will still be accumulated debt, necessitating a look at potentially cutting spending and/or raising taxes.

However, if future governments decide that raising taxes is going to be part of the solution, many experts would prefer it be a consumption tax like the GST/HST. “The reason is that they are the least economically distortionary tax. The negative impact on the economy of raising the GST is less than the negative impact from raising business taxes or raising personal income taxes,” Alexander explains.

For middle and higher income Canadians the most efficient way of increasing taxes would be to raise consumption taxes. But the government shouldn’t want to do that until the economy is really robust, because if consumer spending is dampened during an early stage of a recovery, with consumer spending being 60 per cent of GDP, a recovery will stall, Alexander warns.

“We have one of the higher marginal tax rates in the world at moderately high incomes, so I think tax increases should be one of the last places we should go,” says Douglas Porter, chief economist at the Bank of Montreal in Toronto. “If the choice is between running moderate deficits three to five years down the line, and raising taxes, I’d pick the deficits, especially at the kind of interest rates we’re looking at today.”

Recovery depends on a vaccine

The COVID-19 recession is unique because the circumstances that caused it, and the solution required to put it in the rear view mirror (a proven vaccine or therapeutics to treat the symptoms) are medical, not financial, in nature.

Assuming such a vaccine is produced, there will be another big government expenditure to vaccinate the whole country. But even with a vaccine the timeline to recovery is uncertain. “My assumption is that when we get a vaccine, high-risk individuals and people on the front lines will get vaccinated first. But then it’s going to take a considerable amount of time to roll out the vaccine fully,” says Alexander.

Furthermore, there may be Canadians who aren’t comfortable with the vaccine. Some people are fundamentally opposed to vaccines of any sort. There is also the question of how much protection the vaccine is really going to provide, he adds.

It is going to take a while for the economy to fully recoup all of its losses, including not just the level of GDP before the pandemic, but also where the trend line would have put GDP if not for the missed growth years, says Shenfeld.

“If we have a vaccine that’s being widely distributed by the middle of next year, we expect the economy to start to accelerate and we might be back much closer to normal economic conditions in 2023. Until then, there will be some underperformance in the economy that will keep government revenues suppressed and deficits elevated,” he predicts.

Alexander believes that, assuming Canada only has targeted restraints on specific activities, rather than any measures that jeopardize the overall economic recovery, the economy can probably return to pre-COVID levels by the end of 2022. However he expects the job market will take a lot longer to recover, with the unemployment rate not dropping back to pre-COVID levels until 2023 or 2024.

Porter notes that some sectors, like the housing market and retail sales, were able to rebound within three months. “But when we look at the economy as a whole, getting the job market back to where it was, I suspect could take three years — which  which, compared to other recessions, is not that long. “We’ve seen more drawn out recoveries than that time frame,” he says.

Jeff Buckstein, CPA, CGA is an Ottawa-based business journalist. Image by Steve Buissinne from Pixabay and Canadian Accountant. This is the third article in a five-part series. Read the full series in order: