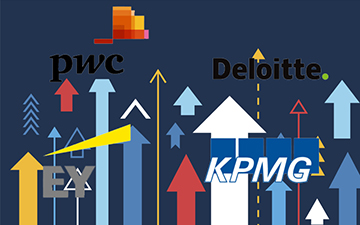 TORONTO, October 1, 2019 – Big Four accounting firm Deloitte has overtaken rival accounting giant PwC to take the title of the world’s most valuable commercial services brand. The good news, however, comes during “a decline in dominance across the Big Four commercial services brands,” according to the world’s leading independent brand valuation consultancy, Brand Finance.

The 2019 Brand Finance report, “Commercial Services 50,” reports that Deloitte’s brand value increased by 42 per cent in the past year, to US$29.7 billion. Deloitte has the strongest brand in the commercial services sector, ahead of companies such as Visa, American Express, Accenture, and its rivals in the Big Four. Deloitte overtook its main rival, PwC, for the first time in 10 years in 2019. It has enjoyed double-digit growth more than 10 years, driven through advisory services, particularly technology, strategy and operations, amd human capital.

Deloitte is the lone bright spot among Big Four accounting firms in the 2019 report. Its Big Four rivals all dropped in ranking in 2019, with PwC, EY and KPMG placing fifth, sixth and ninth respectively among the Top 10 Most Valuable Commercial Services Brands. “With auditors criticised for failures in identifying irregularities across the books of major brands … accountants simply must do more to restore trust in financial reporting.” 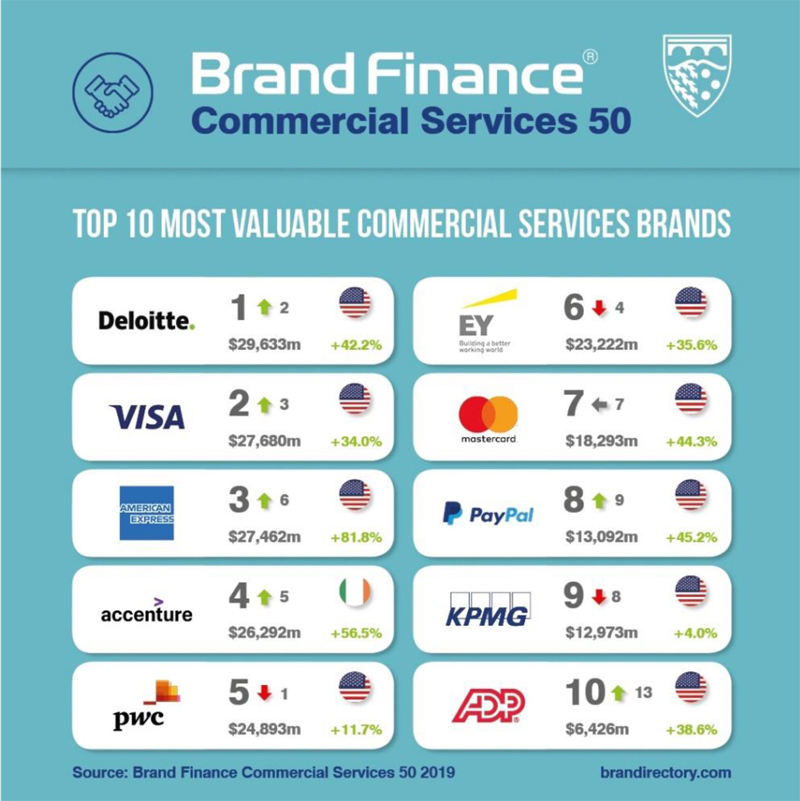 According to Michele Parmelee, chief people and purpose officer with Deloitte Global, “The inter-play of digitization, cloud computing and artificial intelligence is having a profound impact on all businesses, and professional services is no exception. We’re in the very early stages of this new technology wave and no one can know for sure how it will all playout, however, we see several implications for organizations like ours,” adds Parmelee in a full-length interview included in the report.

The news is better when the Big Four is compared solely with other professional services brands such as Accenture, ADP, McKinsey, and Sysco. The Big Four accounting firms dominate the top five most valuable professional services brands, placing first (Deloitte), third (PwC), fourth (EY), and fifth (KPMG). When it comes to strictly assurance and tax service lines, PwC is the most valuable brand, with one of the largest audit and accounting networks in the world. The company particularly benefitted from consulting during changes in U.S. tax policy carried out by President Donald Trump.

According to Brand Finance, the picture is much less rosy for KPMG, which retained its spot among professional services brands despite controversy. “KPMG remains the most troubled among the Big Four, and has been impacted by controversies in 2018, including the widely-covered audit of the now defunct UK construction firm, Carillion. In the future, KPMG will need to modernise further, as the winds of change are already swaying the Big Four firms to take bolder steps towards modifying their traditional consulting models.”

BDO, the Belgian-based accounting firm brand well-known in Canada, retained 10th-place ranking in the Top 10, as the firm is said to be making substantial investments in information technology. The mid-tier accounting firm raised its brand value by 14 per cent in 2019 and seems well-poised for the future through long-term partnerships with companies such as Microsoft. (BDO is the only other accounting brand among the Top 50 commercial services brands.)

Brand Finance published its Global 500 brand rankings earlier this year. While Deloitte and PwC placed in the Top 10 of the world’s strongest brands (the efficacy of a brand’s performance on intangible measures, relative to its competitors), they placed much lower in the rankings of most valuable global brands (the value of a single branded business operating under the subject brand). While Deloitte (57th) and PwC (61st) inched up in the rankings, EY (64th) and KPMG (134th) fell significantly.

A smattering of Canadian companies make the list of the global 500 most valuable brands, including the Big Five banks, the top two telcos (Bell, Rogers), food services (Tim Hortons, McCain) ad CN Railways. RBC tops all Canadian brands, breaking into the global 500 at number 97, nine spots higher than in 2018.

Five ways for CPAs to build a kick-ass personal brand