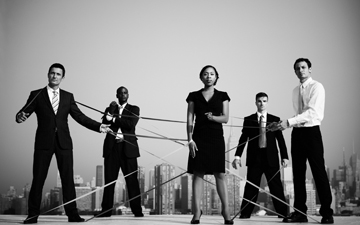 TORONTO, July 24, 2019 – Buoyant from its selection as European auditor for Goldman Sachs International, French accounting group Mazars is touting a five-firm alliance that includes homegrown Canadian accounting firm MNP LLP. Mazars says the alliance will double its size and challenge the market position of the Big Four. A spokesperson for MNP, however, says the firms already have a partnership through the Praxity Alliance, which includes approximately 65 firms worldwide.

“Our ambition is to become a European champion with an international scope,” Mazars’ CEO Hervé Hélias told Reuters recently. “When they call me the fifth big, I like it.” In May 2019, Goldman Sachs selected Mazars in a “major coup” for the firm, following  a European Union regulatory change that now requires listed companies — as  well as the European operations of a few major multinationals — to appoint a new auditor every 20 years. (Goldman had previously used PwC for its European operations.)

Mazars, plus the five largest firms in the Praxity Alliance, have come together to form the Mazars North American Alliance as a companion to Praxity, explains Randy Mowat, senior vice-president of marketing at MNP. (The other four firms in the alliance are BKD, Dixon Hughes Goodman, Moss Adams, and Plante Moran. Mazars will not take any stake in the firms.) Mazars will be able to provide “a better branded offering to those large international clients they have for their inbound work into North America.”

Mowat praises the new group but explains that the business focus is on Europe rather than North America. “Nothing really has changed in that regard for us,” says Mowat. “It’s more of a packaging thing for Europe. Mazars has been a long term member of Praxity as we have.”

As the largest accounting firm in France, Mazars was ranked 14th in global revenue in 2016, and eighth-largest by fee revenue in Britain in 2018. They were ranked 25th in the 2019 Top 100 Firms in the United States by Accounting Today. The French firm, which is based in Rouen, became a footnote in political history this year when it was revealed that Mazars was the long-time accounting firm of U.S. President Donald Trump. (The U.S. Court of Appeals is currently hearing an argument in Trump v. Mazars to block the release of the president’s financial records.)

Collectively the six firms have 40,000 staff globally. “With Mazars North America Alliance, Mazars strengthens its critical scale to meet the needs of large international companies, at a time when mandatory rotation of audit firms is taking place in Europe and where the debate on the implementation of joint audit is relevant in the U.K.,” said Hélias in the U.K. Financial Times.

Mazars is well-positioned if the U.K. follows through with a threat to force FTSE companies to appoint two auditors.  France has required joint auditors of large public companies for decades. Middle market firms Mazars — plus firms such as BDO, Grant Thornton, and RSM — may be included in FTSE auditing through regulation.

Upon the Goldman Sachs announcement, Erik Gordon, professor at the University of Michigan’s Ross School of Business, called it a step forward for the audit profession. “Mazars has the opportunity to dispel the myth that only the Big Four are capable of auditing the largest, most complex companies,” Ross told the Financial Times.

Colin Ellis is the managing editor of Canadian Accountant. Image from rawpixel.com.