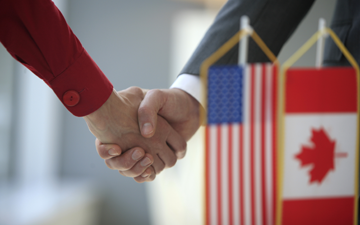 OTTAWA – Businesses in the United States and Canada are keeping a sharp eye on proposed U.S. tax reform plans originating from the White House and Congress that could seriously impact their operations as well as their competitiveness. This week, Canadian Accountant has looked at the overall impact as well as specific proposals of U.S. tax reform.

Today, we look at an aspect rarely discussed — the Trump administration's pledge to lower and simplify personal income tax, and the effects those changes could have on Canadian business.

The White House proposal would see much lower individual income tax rates, including a top personal rate of 35 per cent, down from today’s 39.6 per cent, along with only three tax brackets instead of the present seven. Experts say the proposed personal rate reductions could impact cross-border business choices.

“When businesses are sending people from one country to another, it is common to provide the employees ‘tax equalization’ so there is not net increased cost to those employees. Thus, the employer generally shoulders the burden of increased taxes on the individuals. It can get quite costly because of all the things that are involved with being subject to tax in two jurisdictions,” says Russ Crawford, a Vancouver-based partner with KPMG Canada, who is in charge of that firm’s U.S. corporate tax practice in Canada.

“So, if we have a reduction of the tax rates for individuals in the United States, it may make it more cost efficient from a business perspective in Canada to be able to send people to the United States,” he adds.

However, that could signal negative repercussions for Canada. If the tax cost of equalizing a U.S. person in Canada comes much higher it may become more cost prohibitive to bring people up to Canada, warns Dennis Metzler, a Toronto-based U.S. tax partner with Deloitte Canada in Toronto.

“I [also] worry about the brain drain, so to speak, where we have a young, educated workforce and they’re looking at the tax differential ... I fear that we’re going to lose talent to the U.S.” he adds.

What, if anything, should Canadian companies do to prepare for proposed changes that may or may not come to fruition, and in a format no one can yet predict?

Crawford says a lot of interest has been expressed in his clients’ boardrooms. His advice? First, monitor what’s happening. And second, be flexible.

“Some of my clients have said, ‘I have a decision to make on how I’m going to expand [on] one side of the border or another.’ And to the extent they have some flexibility over the next few months of how to approach that, that flexibility could be very important,” he notes.

Metzler says Canadian companies need to look at their budgets and forecasts for the coming years to at least begin doing some general modeling in anticipation of U.S. tax reform.

“For example, if everybody is more or less of the view that rates are dropping, then it’s good tax planning to see if you can accelerate deductions in the U.S., and defer income. You’ll get a permanent benefit if you’re able to do that, based on the rate differential,” he elaborates.

U.S. tax reform could also impact companies with large capital expenditure plans and growth opportunities on the horizon. Companies might want to consider holding off on those plans, and whether it would be prudent to have future growth take shape in the U.S., rather than Canada, Metzler notes.

“I think the wrong approach is to sit back and say ‘well everything’s in flux, so let’s not do anything until we have a better view.’ We don’t know what the rate’s going to drop to, but it seems pretty clear that, assuming reform happens in some way, shape or form, the rate is going to drop, maybe materially so,” he stresses.