Lessons from Donald Trump: Does a toxic CEO ever truly leave? 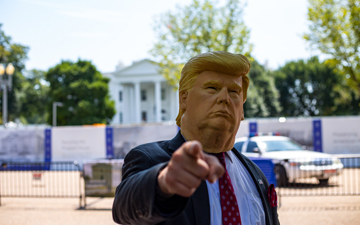 MONTREAL – Psychopaths are people with a variety of behavioural traits that make them uniquely ruthless in their parasitic, care-free and predatory approach to life.

Many organizations are forced to part with leaders who exhibit these traits.

But while they may leave the organization, their style of leadership and the damage they leave behind have a long shelf life. As we’re witnessing in the United States during former president Donald Trump’s second impeachment trial, these types of leaders have loyalists and disciples long after they’ve stepped out of the spotlight.

Successful psychopaths have been less frequently studied than the criminal variety. However, they may possess enhanced intellectual capacity that enables them to function at the executive level and find corporate rather than criminal success.

Such psychopaths have been called industrial, executive, organizational or corporate psychopaths to differentiate them from their more commonly known criminal peers.

Some psychopaths are successful

In his book Without Conscience, Hare says psychopaths:

“… appear to function reasonably well — as lawyers, doctors, academics, mercenaries, police officers, cult leaders, military personnel, politicians, business leaders, and so forth — without breaking the law, or at least without being caught and convicted.”

Researchers, in fact, have found that many senior executives and CEOs are psychopaths.

This is one reason why it’s essential to investigate and identify corporate psychopaths before they’re able to seriously harm an organization. When the psychopathic executive or politician runs out of mileage and is fired or leaves before legal proceedings against them are started, the damage has already been done and can have an impact on the organization’s future.

Dealing with psychopaths in leadership positions requires knowing how psychopaths lead and the impact they have on their adherents or employees. Training managers to be on alert for troubling personality traits is a critical yet difficult challenge.

In Canada, for example, the failure of the federal government to effectively vet former Gov. Gen. Julie Payette serves as an example of how difficult this type of process can be. But the allegations against her during her rocky tenure as the Governor General suggests problematic behaviour can exist in all manner of leadership positions.

Corporate psychopaths are described as people who flatter those above them while manipulating their peers and abusing those under them. Toxic leaders appear to be malicious, malevolent and self-aggrandizing. These are people who manage by controlling, bullying and instilling fear rather than uplifting their teams while simultaneously appearing to their superiors to be enthusiastic, impressive and articulate managers.

The damage that Trump created and left behind will not be corrected with a new president. More than 70 million Americans voted for him in November’s presidential election, many of whom are ardent disciples of his toxic brand.

Fortunately, corporations have greater control over their leaders.

The link between highly psychopathic CEOs and organizational collapse has been explored using a measure of psychopathy applied to the alleged behaviour of British media baron Robert Maxwell and Kenneth Lay of Enron Corp. in the United States. Both men were highly instrumental in the financial collapse of their organizations, which had a substantial impact on the lives of their employees.

Psychopaths are usually toxic leaders who create toxic organizations because of the “rules” they mandate:

There is also some evidence that bullying influences the personalities of those within the abusive environment. Employees become less open and less agreeable, suggesting that an abusive and bullying atmosphere created by a toxic CEO goes viral.

Employee well-being and morale erodes, organizational confusion replaces a sense of direction, organizational ethics decline and corporate reputation suffers. This vicious cycle does not evaporate when the psychopath eventually leaves. It often continues via succession to a willing disciple who found this leadership style attractive and effective, so is intent on emulating it.

Be on guard for disciples

But even if an organization managed by a psychopath enjoys some short-term financial benefits, its long-term resilience is at serious risk.

Aside from pre-employment psychological assessments that may work but often don’t, it’s critical to be aware that psychopathic leaders have followers who demonstrate similar behaviours that propelled their messiahs to key leadership positions.

Whether those leaders leave an organization willingly or are forced out, as Trump was, they can easily be viewed as martyrs by others in the organization. So keep in mind that psychopaths develop and groom disciples, and it’s critical to root them out too for the long-term survival of the organization.

Steven H. Appelbaum is a professor of management at Concordia University. Photo by Darren Halstead on Unsplash.

Handling the ten types of problem people without losing your mind