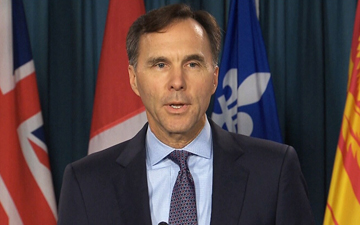 TORONTO, Oct. 19, 2017 – Embattled Finance Minister Bill Morneau has announced that he will place his assets in a blind trust and divest himself of his family business shares. The Minister’s announcement came just hours after a visit to Erinsville, Ont., where Morneau announced the government would “take a step back” and reverse a proposal to restrict the conversion of income into capital gains.

As reported by Canadian Accountant, that proposal raised the ire of farmers across Canada, who consider the tax strategy an essential part of the succession planning of family farms. “The last thing we wanted to do was to create a new problem by trying to solve an old one,” said the Minister of draft legislation on converting income to capital gains that was “too broad.”

The announcement came just hours before Morneau, who returned to Ottawa for Question Period, announced changes to the administration of his own family business.

“I need to do more,” said Morneau, prior to Question Period. “As Minister of Finance in this role it’s important that people have absolute confidence.” He then announced three measures to do with his assets, which are currently held in two numbered companies in Alberta.

Morneau said he would put his assets in a blind trust and work with the Ethics Commissioner to divest his family’s assets in Morneau Shepell. While his shares are divested, there will remain in place a conflict of interest screen, “to make sure that, in that process, I’m completely free of conflict.”

The Minister then faced a barrage of questions from the opposition Conservatives. Referring to “tax loopholes” and “offshore banking,” the Conservatives asked why the Minister told Morneau Shepell shareholders two years ago that his assets would be placed in a blind trust.

They also questioned if and when Morneau told Prime Minister Justin Trudeau that his assets were instead placed in numbered holding companies.

The government has continued to backtrack on its tax reform proposals aimed at tightening restrictions regulating the growing use of incorporation in Canada. On Monday, the Minister announced a small business tax cut, to nine per cent, that was met with incredulity by some tax professionals and economists.

He also announced a “simplified proposal” on “income sprinkling” to ensure there would be no impact to family farms in terms of a means test. And yesterday, the Minister announced a “threshold” of $50,000 per year for business owners, as a passive investment measure.

The revised draft legislation is expected to be released by the government in November. Morneau, who took all questions by himself today in Question Period, announced the release of the fall economic update, slated for Tuesday.