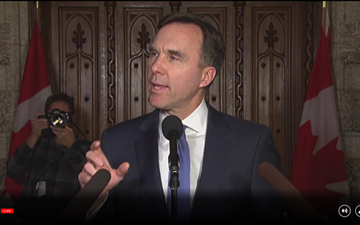 TORONTO, Dec. 13, 2017 – Canadian accountants can now start loading their spreadsheets as Finance Minister Bill Morneau has unveiled its “off ramps” and simplified rules for “income sprinkling,” as the House of Commons readies to rise for its holiday recess.

At his press conference following the announcement, Morneau said, "It's a good day when a hundred per cent of small businesses have the opportunity to have lower taxes so they can invest more in their businesses."

According to the Minister, "For the three per cent of small businesses, private corporations in particular, that pass some of their revenues to family members, they're going to find a way to make sure that these rules are considered appropriately.

"For most of the families that are passing revenue to family members working in the business, there's clear tests so they can show they're doing it appropriately.

"For those that are passing income to family members who are not involved in the business, it's clear that's no longer going to be considered appropriate."

Finance Canada said Wednesday that, “under the new simplified proposals, the number of family businesses that would be affected annually is estimated to be fewer than 45,000, or less than 3 per cent of Canada's 1.8 million Canadian-controlled private corporations.”

No reasonableness test will be required for family members:

Earlier in the day, the Senate finance committee, which has sided with critics of the minister’s approach, urged the government to cancel the plans entirely and launch a review of the entire Income Tax Act. If the government was unwilling to do so, it should delay the tax changes by a year, according to the Committee’s 50-page report.

"This is not some exercise to embarrass the government, indeed Minister Morneau endorsed our investigation at the outset," said Senator Percy Mockler, the Conservative chair of the committee. "We believe there is too much confusion for the government to proceed on the timeline it has suggested."

"We of course are pleased to get the Senate report," said Morneau. "I understand that report was not unanimous. I want to be clear we are moving forward on January 1, 2017. We will respond to that Senate report appropriately."

Colin Ellis is the managing editor of Canadia Accountant.