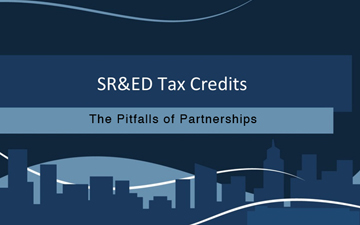 One of the key obstacles accountants need to be aware of is the impact that partnerships can have on claims.

Businesses that are legally structured as partnerships are not excluded from being able to claim SR&ED Investment Tax Credits (ITCs). However, partnerships participating in the SR&ED program may find the process to be significantly more complex compared with normal corporations. Key differences in the treatment of partnership entities may result in reduced benefits. It is vital to consider these prior to making a claim for SR&ED expenditures and credits.

Being aware of these can give accountants the opportunity to help clients ensure they enjoy the maximum benefit possible. Client companies may even take a different approach to how they enter partnerships once they realise the significance of different partnership structures.

At first glance, the rules around partnerships are not easy to fathom. That’s because the Income Tax Act does not define a partnership, it simply outlines the tax consequences if a partnership exists.

Since a partnership is not a taxpayer, it cannot earn ITCs either. As a result, any ITCs are calculated at the partnership level but then divided among some or all of the partners, who may be individuals, corporations or trusts.

The key difference for partnerships is that SR&ED is less generous, and is capped at 15% of qualifying expenditure, even if the partner is a Canadian-controlled private corporation or a qualifying corporation. Crucially, this reduced ITC rate of 15% is also only partially refundable; where a partnership has no tax owing in the year, only 40% of the 15% total ITC may be refunded.

Eligibility rules also govern which ‘partners’ are entitled to receive a share of any ITCs, within a partnership with several members. ‘Specified members’ are not eligible. These are partners who, during a given tax year or fiscal period, fail any of these three tests:

To be considered actively engaged in the activities of a partnership, a member would normally be expected to contribute time, labour and attention to the partnership business to an extent which has a meaningful impact on its successful operation. A partner that does not participate at all in the management of the business would certainly not be considered actively engaged.

Where there is a specified member, any ITC that would have gone to them is shared out among the other partners but not necessarily along the same lines. The partners can decide what is reasonable in the circumstances, and take into account investments made by different partners, as well as the debt obligations of the partnership and individual members.

Companies belonging to partnerships that are performing SR&ED should review their status and involvement annually in light of these rules. The need to do so will be particularly acute for members who, despite investing significant time and money in a partnership, find they still can’t claim SR&ED ITCs because they are classed as ‘specified members’.

Richard Hoy is president of specialist tax consultancy Catax Canada. You can reach him at richard.hoy@catax.com.

When a client wins grant funding, it can have a dramatic impact on their claim
Practice