Down to brass tax: R&D vs SR&ED 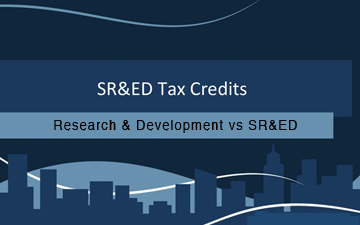 BUSINESSES undertake innovation all the time but, when it comes to the tax incentives they are eligible for, not all innovation is born equal.

It’s often assumed that all research and development qualifies for tax incentives but dubious claims are still frequently received and rejected by the Canada Revenue Agency. Even accountants have a hard time making what are, at times, fine judgments over eligibility.

In fact, determining the innovation that qualifies from that which doesn’t is one of the hardest things accountants must do when assessing Scientific Research & Experimental Development (SR&ED) claims for clients.

On the face of it, the wording of the legislation that governs this tax incentive appears straightforward — requiring, as it does, the furthering of technical knowledge and the presence of scientific or technological uncertainty.

But it’s not always black and white. In this article, we look at some real-world examples to demonstrate how finely balanced it can be, and what to look for to reduce the chances that claims will be rejected.

Breaking down the difference

One Catax client claimed SR&ED after developing a new style of beer. The company had to work with a yeast strain that wouldn’t do its job if the mixture was too acidic. Given fermentation usually creates pH levels of between 3.2 and 3.4 — anything less than pH 7 is acidic — this was a big problem.

Through technical innovations, they were able to get the yeast to work in this environment. Of note are the steps they took which did not qualify for the tax incentive. Though integral to their efforts, all the work that went into selecting different yeasts based on their known properties, including their ability to withstand higher fermentation temperatures, was not eligible. Neither were their efforts to make the alcohol content more consistent between batches when the differing levels of sugar in the fruit they were using created too much variation.

Another client developed a new recipe for kombucha — fermented black tea. Here, the qualifying SR&ED included innovations that substantially extended its shelf life while not relying on known methods such as pasteurization or HPP (high pressure processing), which would have destroyed the ‘good bacteria’ the drink is famous for.

Development of strategies that ensured the probiotic content remained high for an extended period and without refrigeration was also eligible for SR&ED. However, experimenting with how to achieve a high probiotic content by adding probiotics after pasteurization was not.

One misconception we often come across, even among accountants, is that testing of existing solutions forms qualifying activity. This is likely to be because prototyping and testing of new solutions would normally qualify.

Say your client is a bicycle manufacturer, and they’re not happy with the reliability of their painting process for red bicycles. High ambient temperatures in their shop during the summer and variable humidity levels means adhesion is poor. Testing shows that having an even thickness over the bike frame is also important to prevent paint chipping and fading.

Having searched for industry solutions, they choose some promising techniques and begin to test whether they will solve the problem. This work is certainly R&D, but it’s not SR&ED. They are simply trialling solutions that already exist and not contributing to greater technical knowledge within their industry. This is how product selection, even if testing is involved, differs from experimental development.

Then this client realizes they still can’t apply the paint evenly in all seasons and begins testing modifications to the conveyors, which rotate the bike frames through multiple axes as they go through the paint shop. They need to be able to apply the paint properly within two passes otherwise productivity suffers.

After experimenting with sacrificial coatings where the paint is still too thick, the company opts to trial targeted sprayers to the final stage of the conveyor on the final pass to add paint precisely to undercoated areas. Testing shows they’ve finally solved the problem. This experimental development project taught the client something new and does qualify as SR&ED.

Confusion over software and IT

These are great examples of how SR&ED begins to emerge from the soup of innovation put forward by clients, who unfortunately often assume all relevant activity will qualify, particularly when claiming for the first time.

Where accountants’ glasses can become a little more fogged up is in the world of software and IT. These can be incredibly complex areas for SR&ED claims, which often leave tax analysts navigating specialisms within specialisms. By way of example, here are some of the traps that await you when assessing custom CMS and e-commerce platforms.

An example of a successful SR&ED claim on software

One company set about deducing the optimal algorithm that would allow a piece of software to suggest employment contracts to workers based on different parameters such as distance, location and pay. The technical uncertainties of the project included how to measure these parameters in real-time, including staff attendance.

So you can see, the judgments required when making claims vary in difficulty from one industry to another. Claims rely on there being an element of uncertainty surrounding the solutions developed by clients, and that uncertainty can end up being shared by accountants.

If you are an accountancy business interested in partnering with Catax, you can find out more by emailing Richard Hoy, president of specialist tax consultancy Catax Canada, at Richard.Hoy@catax.com.