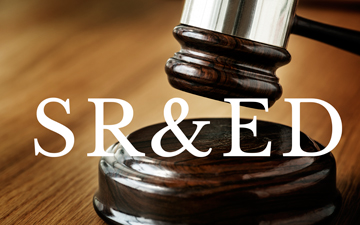 Stevan Novoselac of Gowling WLG on practical considerations for resolving SR&ED appeals, in light of a recent decision by the Federal Court of Appeal

The five-part test for determining eligibility of SR&ED expenditures has been well established for many years and is consistently applied:

When marshalling evidence aimed at meeting these criteria, certainly one of the most critical aspects is obtaining expert testimony. It can be highly problematic, even fatal, not to retain an expert, or to have a proposed expert that does not get qualified by the TCC to testify. Experts have an overriding duty to assist the TCC impartially on matters relevant to their area of expertise. This duty overrides the expert's duty to the taxpayer, even though they are retained and paid by the taxpayer. The expert must be independent and objective and not merely an advocate for a party.

The sole issue in National R&D, a TCC decision that was affirmed by the FCA, was whether expenditures incurred on a certain project were SR&ED eligible. The only witness who testified before the TCC was the taxpayer's sole shareholder and president, who conducted all of the subject activities himself, with a student helping. Given his subject matter expertise, he was accepted by the TCC as a litigant expert, which enabled him to provide opinion evidence, as an expert witness, in addition to providing evidence on matters within his personal knowledge, as a regular fact witness. The taxpayer had also retained an expert, although the TCC did not qualify this proffered expert witness.

In deciding not to qualify the taxpayer's expert witness, the FCA explained why the TCC found that the proposed expert report did not comply with TCC Rules or the Experts' Code of Conduct. The FCA also affirmed the TCC's finding that the requirements of impartiality and independence were not satisfied, pointing out that the taxpayer wrote 65% of the proposed expert's report and that in tone the report was an exercise in advocacy. Further, the report failed to meet the requirement of necessity, in that it was an improper opinion on the application of the law to the facts. This is a commonly seen problem in SR&ED cases, where the expert seeks to provide an opinion on whether the subject expenditures qualify, which is of course the central legal issue the TCC must determine. Here, the FCA cited the trite proposition that, with the exception of foreign law, a court does not need an expert opinion on how to apply the law. Finally, the FCA did not reverse the TCC's decision that the proposed expert failed to pass through the final or gatekeeper stage, where the TCC balanced the probative value with the potential prejudicial effects.

On the substantive issue, the taxpayer submitted before the FCA that the TCC erred in relying on the usual five criteria for determining eligibility of SR&ED expenditures, arguing that they are mere guidance and not mandatory prerequisites for SR&ED eligibility. The taxpayer's focus was on the third requirement, which as noted above is whether the procedure adopted accorded with the total discipline of the scientific method, including the formulation, testing and modification of hypotheses. The taxpayer stressed that this was not a requirement for SR&ED eligibility found in the Income Tax Act and sought to establish a distinction between the scientific method and what it called the engineering method. The FCA rejected this argument and upheld the scientific method criteria, for essentially four reasons.

First, the FCA pointed out that it had previously considered and rejected a similar argument and further stated that this position was not inconsistent with CRA guidance, which the FCA acknowledged was not binding.

Second, the FCA explained that the taxpayer's argument proceeded on a misunderstanding of the relationship between the courts and legislation. The FCA confirmed that a court setting out its understanding of legislation in jurisprudence was not an improper exercise of judicial legislation: "Parliament and the legislature rely on the courts to give definition, amplitude and precision to statutory language as required by the circumstances of the case."

Third, the FCA held that the TCC had not adopted a restrictive approach to what constituted the scientific method and properly applied the criteria within the context of the taxpayer's business environment.

Fourth and finally, the FCA stated that there was no proven distinction between the scientific method and the engineering method. To support the assertion that such a distinction existed, the taxpayer sought to rely on merely an article contained in its book of authorities filed with the FCA, instead of seeking to rely on any evidence that had been put before the TCC. The FCA described this as "... an impermissible attempt to establish, through the back door, a fact that should be a matter of evidence at trial" and clarified that: "If there is a critical distinction in the methodology used in the applied as opposed to natural sciences, then the appellant is required to establish that fact in evidence." Accordingly, this kind of evidence would need to be adduced through experts.

This case illustrates the critical importance of retaining independent subject matter experts who can be properly qualified. In our experience, we have consistently found that leading experts are available at a reasonable cost. While the technical leads who actually worked on the projects in issue are typically subject matter experts, having an independent expert is much more compelling, both for negotiating with the CRA and for presenting your case before the TCC, when a settlement is not achieved.

Depending on the facts, in the right case an argument may be advanced that a distinction does exist between scientific research versus experimental development and that the two concepts may have effectively been conflated, especially relating to the application of the fifth eligibility criteria relating to documentary requirements. We have experience working with expert opinion evidence supporting the proposition that there is a long established and fundamental difference between scientific research and experimental development and that these concepts have sometimes been mistakenly merged, which can effectively operate to prejudice taxpayers.

Finally, SR&ED TCC appeals can be appropriate for contingency fee arrangements, since they seek tax credits. This can help make it financially practicable for taxpayers to retain experienced counsel to successfully pursue SR&ED claims.