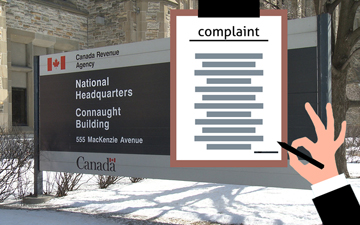 TAXPAYERS being audited by the Canada Revenue Agency ("CRA") are not likely to describe the experience as pleasant. After all, the CRA's main goal during an audit is to uncover errors with the taxpayer's filings, which would result in the taxpayer owing money. This type of scrutiny, despite being a normal part of a country's tax administration and enforcement mechanisms, will inevitably tend to feel personal and invasive for the taxpayer.

While a taxpayer's frustrations with a CRA official can often be the by-product of a stressful process, rather than resulting from actual misconduct by the CRA, there are cases where the CRA's conduct fails to meet expectations. For such cases, there is a framework to allow taxpayers to file official complaints against the CRA.

The Taxpayer Bill of Rights is a list of 16 rights describing the treatment a taxpayer is entitled to receive from the CRA. Eight of these 16 rights are considered service rights, which specifically are the rights to:

Given that dealing with the CRA can certainly be a challenging experience for taxpayers, it is common for taxpayers who are subjected to an audit to feel that some of their rights have been violated.

Taxpayers who believe that one or more of their rights have not been respected are encouraged to first file a service complaint directly with the CRA's Service Complaints Program. If the CRA has not resolved the taxpayer's service-related complaint to the taxpayer's satisfaction, a further complaint can be submitted to the Office of the Taxpayers' Ombudsperson ("OTO"). The OTO is functionally independent and operates without influence from the CRA. The OTO reviews complaints about the quality of service a taxpayer received from the CRA. Therefore, their mandate is strictly to review whether the eight service rights in the Taxpayer Bill of Rights have been respected.

As part of the review process, the OTO may request written submissions from the CRA and the taxpayer, as well as hold in-person meetings with the parties. When the OTO completes their examination of a complaint, they may provide a recommendation to the CRA, if they determine that one or more of a taxpayer's rights were not respected. The OTO's recommendations could include that the CRA:

As discussed above, it is a common reflex for taxpayers who have endured an audit to want to file a service complaint against the CRA. Alternatively, taxpayers sometimes wish to raise service issues as part of a written submission to the CRA dealing with the substantive tax issues under review (e.g. mention the CRA auditor's alleged unfair or unprofessional treatment in a notice of objection). Those are two different options: in the first instance, the service complaint will be reviewed by an official whose role is to review such complaints; in the second case, the taxpayer is raising service issues in a written submission to be reviewed by the CRA official who will be ruling on their tax issue (e.g. a CRA Appeals Officer, who will either fully or partially accept or entirely disallow your notice of objection).

Generally, our advice to a taxpayer in the midst of an ongoing tax dispute is to defer filing a service complaint until after the tax dispute gets resolved. We also generally advise clients to refrain from including service issues as part of a notice of objection or similar written submissions. In our experience, while the tax dispute remains ongoing, it is generally not helpful to raise Taxpayer Bill of Rights arguments in written submissions. The CRA official reviewing the file is unlikely to rule differently on the tax issue because of fairness issues raised by the taxpayer. Their focus will be on the substantive tax issues, rather than issues of service, which in our view should also be where the taxpayer and its representative focus their time and energy. Moreover, the taxpayer's desire to file such a complaint often wanes once the tax dispute has been resolved, especially when it is resolved in the taxpayer's favour.

For example, the taxpayer's tax issue may have been created as a result of the taxpayer's reliance on incorrect or inconsistent advice from the CRA. While the OTO cannot overturn a decision made by the CRA, their review of the complaint while the tax dispute is ongoing could lead them to determine that the CRA showed a lack of accountability by refusing to address inconsistencies in the information provided to the taxpayer. The OTO could then provide a recommendation that the CRA take all possible measures to place the taxpayer back in the position it would have found itself had the taxpayer not relied on the CRA's incorrect information or erroneous advice.

There are also sometimes cases that involve political or other sensitivities, which go beyond the strict tax issues to be resolved with the CRA. In such cases, a CRA official may not be adequately apprehending or giving due consideration to the secondary non-tax issues. Alternatively, the CRA official could let such non-tax considerations influence their handling of the file, resulting in unfair or inconsistent treatment of the taxpayer. The OTO may consider such a case to include compelling circumstances, which could allow the taxpayer to bypass the initial step of filing a complaint with the CRA, and instead send its complaint directly to the OTO. The service complaint could then be included as part of a multi-pronged approach, along with a notice of objection and taxpayer relief application. In a situation like that, a service complaint could help create leverage or another pressure point for settlement negotiation purposes.

In summary, taxpayers and their representatives are encouraged to view a service complaint as another element in their tax dispute resolution toolbox, albeit one that should be used sparingly and more specifically in circumstances where it could help achieve a favourable outcome of an ongoing tax dispute.

Pierre Alary is a partner in the Ottawa office of Gowling WLG, practising in the area of taxation law. Read the original article on GowlingWLG.com.

John Sorenson of Gowling WLG asks whether the Glenmac decision demonstrates a tax system that is just, equitable and fair
Practice

Stevan Novoselac and John A. Sorensen of Gowling WLG on the nuances of the CRA's VDP Operations Manual