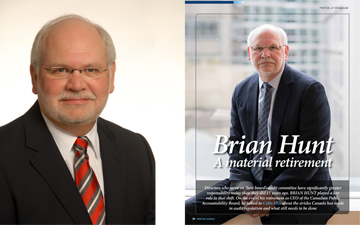 Directors who serve on their board’s audit committee have significantly greater responsibility today than they did 15 years ago. Retiring CPAB CEO Brian Hunt, FCPA, FCA, played a key role in that shift.

In early 2018, Canadian Accountant managing editor Colin Ellis interviewed the now-retired CEO of the Canadian Public Accountability Board, Brian Hunt, FCPA, FCA, ICD, for the March/April 2018 issue of Director Journal, published by the Institute of Corporate Directors. This profile focuses on the modern role of corporate directors and audit committee members and its transformative change. We will publish our own interview with Brian Hunt later this month.

TORONTO – When the history of 21st-century corporate governance is written, chapter 1 will surely begin with the 2001 collapse of Enron Corp., the energy-trading giant that was once the seventh-largest company in the United States. Among its many failures of corporate governance, the conflicts of interest inherent in Enron’s audit firm, Arthur Andersen LLP, and its own audit committee, were just the tip of the iceberg. Similar conflicts at other firms led to a domino effect of accounting and corporate scandals, bankruptcies and a new era of audit regulation.

“It was one of the biggest fraud collapses of a legal entity in the U.S.,” says Brian Hunt, 66, the retiring chief executive officer of the Canadian Public Accountability Board (CPAB), which oversees financial reporting by public companies in Canada. “We had to do something to regulate [audit] firms because, at that point, it was all self-regulation. The firms weren’t really regulated, particularly the global firms, the Big Six. That was the push that got them there.”

It is impossible to tell the story of audit regulation in Canada without Hunt as a key figure. He was a founding director of CPAB in 2003 before his appointment as CEO in 2009. A holder of the Institute of Corporate Directors’ ICD.D designation, he has devoted the past nine years to ensuring that an Enron-style collapse does not occur in Canada, by enhancing audit quality through a combination of oversight, compliance and governance initiatives for audit committees and their directors.

The Sarbanes-Oxley Act of 2002 created a new audit regulator in the United States, the Public Company Accounting Oversight Board (PCAOB), which in turn created “extra-territorial issues,” according to Hunt, owing to the large number of dual-registrant, publicly traded companies and U.S. subsidiaries on the Toronto Stock Exchange.

Rather than allowing the United States to dictate the rules in Canada for companies that traded in both jurisdictions, Hunt says Canadian stakeholders that included the Canadian Institute of Chartered Accountants, the Office of the Superintendent of Financial Institutions and securities regulators across Canada, got together and said: "We need to form our own PCAOB in Canada."

CPAB began in 2003 as a voluntary organization, but membership for auditors quickly became mandatory under Canadian securities regulation (the organization is funded by reporting issuers). As Canada’s audit regulator, CPAB worked, province by province, to enact provincial legislation that provided its directors and staff with authority and immunity needed to fulfill their mandate, “as long as we act in good faith,” Hunt says.

A chartered professional accountant, Hunt has been a CEO for nearly 30 years, first occupying the C-suite in 1989 as president and CEO of a national fleet management company, at the relatively youthful age of 37. His career progressed through CEO positions at the Canadian Automobile Association, the Institute of Chartered Accountants of Ontario and CPAB. He is also the current chair of the International Forum of Independent Audit Regulators.

His office on the ninth floor of Adelaide Place on York Street in Toronto is modest in size and surrounded by glass, suggesting two CPAB values, discretion and transparency. In conversation, Hunt combines the focus of an accountant with an amiable desire to persuade, often punctuating the end of a sentence with an interrogative “right?”

Despite his substantial experience as a director, he pursued the ICD designation and calls the Directors Education Program “excellent,” particularly the strategy discussions. “I’m a big fan of what ICD is doing,” he says, noting that CPAB’s work on audit-quality indicators has identified and supported the key role of directors and audit committees in enhancing audit quality.

“When we started out in 2004, we were just looking at an audit file. Today, we look at how do we engage audit committees and directors in helping them fulfill their governance role in the quality of audit and financial statements.” He adds, “We’ve enjoyed working with ICD in a number of these initiatives.”

Hunt’s tenure at CPAB has been notable for audit-quality initiatives. “Whether you’re a director at an audit committee or at a firm, how do you assess or measure audit quality? Directors of audit committees and the auditors have a role to play in coming up with a quality audit.”

In response to the financial crisis of 2008-09, CPAB and the Chartered Professional Accountants of Canada (CPA Canada) collaborated on an initiative that sought to enhance audit quality by asking stakeholders for their input. The resulting guidance tools for audit committees, created in collaboration with CPA Canada and the ICD, were published in 2013.

Another initiative that excites Hunt is CPAB’s audit quality indicator (AQI) pilot project. “Audit quality remains an elusive construct to both define and measure,” according to the International Federation of Accountants (IFAC). Yet, as of 2016, no less than nine organizations around the world were working on its measurement, in the belief that “what gets measured gets managed.”

Through the AQI project – and better understanding of what gets measured – audit committee directors, particularly those with an industry rather than financial background, “start to understand how an audit is done – what are the risks, how are they managing those, what are the issues? It gives them greater insights into what they’re doing,” he explains. “So, by using AQIs, you’re getting a far better audit than you would have in the past, and it’s really connecting the key players.”

Hunt notes that the companies in the AQI pilot project are large-capitalization, TSX 60 players. “We need to take that down to the mid-tier, $100-million market cap, and I think there’s some very responsible people who will take this on. There’s others that it’ll be a tougher sell. But I think we can scale it [up] and benefit everyone by raising that bar.”

As the role of the audit committee increases in importance, so too have the regulatory demands foisted upon directors, driven by global governance trends in transparency and disclosure. In the United States, the PCAOB recently approved a new expanded audit report requiring the disclosure of “critical audit matters.” In the U.K., the Financial Reporting Council (FRC) changed its governance regulations around audit committees to require the reporting of critical audit matters.

Hunt sees these moves as positive over all. Canadian standard setters are moving ahead with “key audit matters” that are expected to be implemented in 2020. “The one worry I have in Canada is that we have not changed the rules around audit committee disclosure – it’s on a voluntary basis,” Hunt says. His opinion is that Canadian securities legislation should change.

“In my mind, the [U.K.’s] FRC has done it correctly. To get value out of that expanded audit report and key audit matters,” Hunt asserts, “all parties must have a vested interest at the table. That’s not the case here. The auditor has to disclose certain things. Companies may be willing or not willing to co-operate. And that’s where you could get into boilerplate [financial reporting].”

The other area that concerns Hunt is the growing responsibility of audit committees for risk reporting. “A lot of them are becoming risk and audit committees, especially cybersecurity risk,” Hunt says. “I think you have to ask if they really have the expertise. And one of the things I hear from audit committees is that they’re overburdened now.”

As a key player in audit regulation, Hunt has helped to drive the sector from a position of self-regulation 15 years ago, to one where there is now a reasonably robust regulatory framework, albeit with far greater expectations and responsibilities for audit committees and their directors.

“Being a director today, I won’t say it’s a full-time job, but it’s a serious job,” says Hunt. “And people need to take it very seriously, whether you’re on the audit committee, the risk committee, whatever it happens to be. There’s a lot to be done. To me, it’s a very serious issue.”

Hunt makes it clear that the corporate governance story has changed. “You’re on the audit committee? Boy, you’ve got a lot of responsibility today.”

Colin Ellis is the managing editor of Canadian Accountant. This article is reprinted with the permission of the Institute of Corporate Directors. It originally appeared in the March/April 2018 issue of Director Journal.