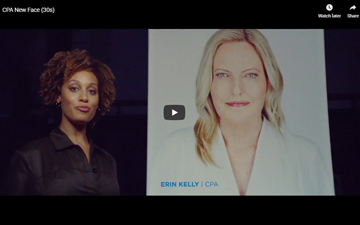 TORONTO, September 13, 2019 – The real faces of Canadian accountants are featured in a new brand campaign launched this week by the CPA profession’s national branding committee in partnership with advertising agency DentsuBos. The premise of the campaign is “Think CPAs are stuck in the past? Think again.”

The 2019-2020 campaign aims to portray CPAs in a modern light by focusing on “the faces of diversity, competence and innovativeness that are the hallmark of the Canadian CPA profession.” Portraits of seven chartered professional accountants will be featured in television, print and digital ads and social media posts. The ads will showcase their range of interests, skills and community service, as well as their adherence to a standard of ethics.

“This campaign features inspiring CPAs who come from diverse backgrounds and have a positive influence in many sectors of society. It shows us real faces and, by extension, the true nature of the profession today," said Lyne Lortie, chair of the CPA branding committee and vice-president of public affairs, brand strategy and communications at the Quebec CPA Order.

“The passion, competencies and intelligence that CPAs bring to a number of economic sectors are effectively and eloquently illustrated. The faces that will be seen in this campaign are definitely faces that people won’t forget,” adds Lortie. More information is available at thefaceofcpa.ca; below is the first is what is expected to be a series of spots.

This year’s ad campaign builds upon last year’s “CPAs are boring campaign …” which began its spots with a voiceover narration stating “They say CPAs are boring.” The campaign “set the table to come back this year with an even more compelling message,” Lortie told Strategy Magazine. “Again, breaking the myth that CPAs are stuck in the past, while making the CPA more relevant than ever.”

According to Lortie, last year’s campaign resonated with business leaders as well as students and CPA candidates. The budget for the national campaigns has been “steady or slightly decreasing” over the last five years, according to the Strategy article.

How to prosper in the age of accounting robots

Three strategies for embracing rather than fearing artificial intelligence
Opinion