‘New and improved’ Doug Ford doesn’t extend to the environment 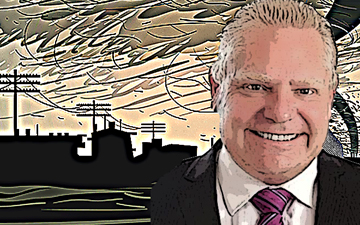 TORONTO – A defining feature of Ontario politics in the aftermath of the October federal election has been the emergence of a re-branded version of Doug Ford’s Progressive Conservative government.

The bombastic, aggressive tone of the government’s first year in office has, for now, been replaced by one of moderation and appeasement.

Ford’s new approach has been on display over the past few weeks in his amicable meeting with newly re-elected Prime Minister Justin Trudeau. The Ontario premier has promised, among other things, to work “hand in hand with the prime minister” to ratify the new North American free-trade deal.

The same style was evident in Ford’s approach to the recent premiers’ meeting as he emphasized the need for unity and to heal regional divisions.

More broadly, the government’s behaviour over the past few months has been defined by a series of “walk-backs” from various dramatic announcements in its first year. Those retreats have included pulling back from budget cuts to childrens’ aid, public health and autism services and a decision to proceed with a previously cancelled French-language university initiative.

If nothing else, it seems Ford is getting the message from Ontario voters — delivered most recently through their rejection of the federal Conservatives in October’s election — that they aren’t happy with the government’s direction during its first year in office.

But there’s been one notable exception to the Ford government’s supposed willingness to change direction. On environmental and energy issues, the government remains on the same path of disruption and destruction that defined its first piece of legislation that dismantled the previous government’s climate change strategy.

That point was recently highlighted again in the provincial auditor’s report. If Ford was hoping that by eliminating the office of the province’s environmental commissioner last year he would be rid of a potential critic of his government’s environmental performance, he must be sadly disappointed.

The report from the auditor, whose office has taken on the environmental commissioner’s responsibilities, makes clear that there are major gaps in the government’s so-called made-in-Ontario environmental strategy  tabled last year.

In addition to highlighting the gaping holes in the government’s climate change plans, the report highlighted a host of other environmental challenges facing Ontario, including ongoing urban sprawl, air pollution, water quality and biodiversity protection. The province seems to have no idea how to move forward on any of these issues.

The government’s record on the environment and climate change during its first year in office is well known.

In addition to cancelling the previous Liberal government’s climate change strategy, it also launched legal challenges to the federal carbon pricing backstop that replaced it. It repealed the Green Energy Act and cancelled 738 renewable energy contracts at the cost of at least $231 million. It terminated the province’s energy conservation framework for electricity.

It rewrote planning rules at provincial and local levels in favour of developers. It weakened protections for endangered species. It attempted to open parts of the Greater Toronto Area’s greenbelt to developers. And it repealed the province’s toxics use reduction legislation.

Environment not helped by new tone

And so its new tone notwithstanding, the government’s assault on the environment seems to be continuing. Its most recent iteration is Bill 132, a massive omnibus bill ostensibly aimed at reducing “red tape.” Buried in its details is an attempt to undo the previous Liberal government’s moratorium on neonicotinoid pesticides, widely identified as posing serious risks to pollinators.

Other provisions of the act weaken the rules around forestry operations, mining, water taking, gravel pits and quarries and pollution.

The government is moving forward with a parallel proposal that would dismantle the province’s regulatory framework for controlling industrial water pollution, first established in the early 1990s as the Municipal-Industrial Strategy for Abatement (MISA) program.

The government is proposing to move away from the MISA program’s province-wide pollution limits for each major industrial sector and return to the pre-MISA model of negotiating pollution limits on a facility-by-facility basis. The underlying goal seems to be to make it easier to authorize increased discharges of both conventional and toxic water pollutants.

The MISA rules are now 25 years old, and there have been calls from the former Environmental Commissioner’s office and others for their overhaul and updating. Instead, the Ford government is effectively proposing to turn the clock back on how the province manages industrial water pollution to more than half a century ago.

The ongoing tragedy of mercury poisoning at Grassy Narrows from a pulp mill that operated at Dryden, Ont. in the 1960s and ‘70s speaks to the effectiveness of that kind of regime.

More broadly, the Ford government’s behaviour suggests that it is unable to grasp either the material or political significance of environmental issues.

That point was driven home again recently when both Greg Rickford, who heads the Ontario Ministry of Energy, Northern Development and Mines, and Joe Oliver, the government’s appointee as chair of the province’s Independent Electricity System Operator (IESO), seemed to doubt the reality and significance of the impacts of climate change. Oliver, a former Stephen Harper-era federal natural resources and finance minister, said Canada will benefit economically from a warmer climate.

Their sentiments put the government at odds with an the overwhelming scientific consensus on the causes of climate change and the seriousness of its implications for Canada and the rest of the planet.

It’s also dismissive of the ordeal experienced by residents of the Muskoka and Ottawa River valleys during unprecedented floods in the spring of 2019.

Environment Minister Jeff Yurek’s call for “help” in dealing with climate change notwithstanding, the recent Oliver and Rickford debacles suggest the Ford government has completely missed the point of the October federal election. The inability of the federal Conservatives to articulate an effective strategy to deal with climate change was one of the reasons they failed to make any electoral inroads in Ontario.

Where the government goes from here is an open question. The provincial auditor has handed the government a clear and concise statement of the state of Ontario’s environment, the major problems it faces and the implications of those challenges for the health and well-being of the province’s residents.

There is an old saying that if you find yourself at the bottom of a hole, the first thing you do is to stop digging.

For the Ford government on the environment, good places to stop digging would be to end its quixotic crusade against carbon pricing, abandon the retrograde measures in Bill 132 and halt its efforts to dismantle the MISA program. From there the government needs to move forward, fast, on the very real environmental problems facing the province.

Mark Winfield is a professor of environmental studies at York University.