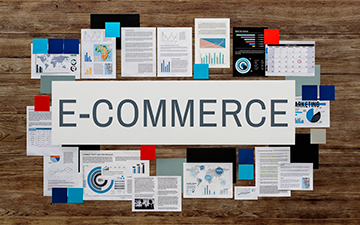 TORONTO, June 3, 2019 – Canadian tax policy is bleeding millions in lost e-commerce tax revenue while incentivizing Canadian businesses to expatriate for a competitive advantage, according to the Auditor General of Canada (the "AG").

In one of a series of Spring reports, the AG released its work "Report 3—Taxation of E-Commerce" (the "Report" or "Audit"). The Report describes that Canadian businesses are at an unfair disadvantage compared to foreign e-commerce business as a result of an inadequate e-commerce GST/HST regime.

By way of background, the current legislative obligations for the collection and remission of GST/HST in Canada are complex for vendors and consumers (as evidenced in the chart below available in the Report). The complex and archaic nature of the GST/HST rules result in unpleasant results for the Canadian economy. 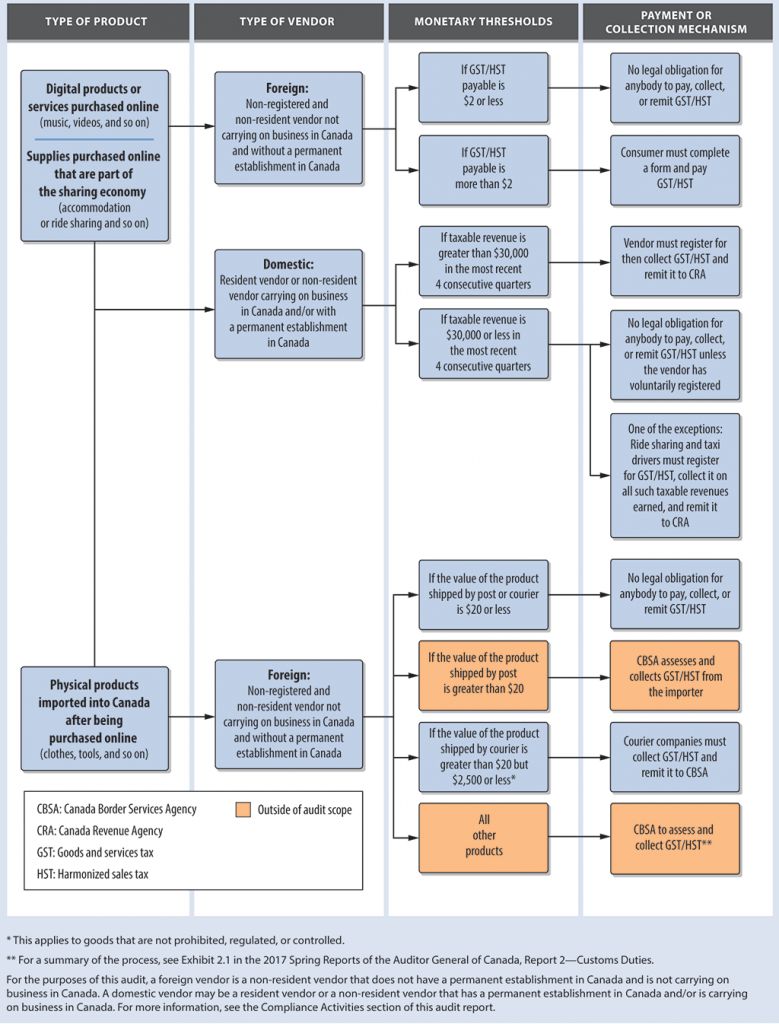 The Report focused on whether the sales-tax system treated vendors equally when it comes to GST and HST, and found that in 2017, Canada lost an estimated $169 million in GST on foreign digital products and services sold in Canada.

The Audit found that Finance Canada conducted sound analysis on the implications of e-commerce on GST and HST. The Report discussed the Organisation for Economic Co-operation and Development's ("OECD") analysis regarding the collection of sales-tax on cross-border business-to-consumer purchases. The OECD concluded that the most effective means of collecting sales tax was to require the vendor to register for, collect and remit the tax according to where the product or service is consumed.

The OECD also recommended limiting the compliance burden on foreign vendors, as they may have sales tax obligations in multiple jurisdictions. In 2018, OECD received survey results from 60 sales-tax countries regarding registration systems for foreign vendors. Among the 60 countries, 37 had implemented or were in the process of implementing simplified registration systems for foreign vendors, 16 countries had different mechanisms to collect sales and taxes and five countries had responded "Not Applicable". Canada was 1 of only 2 countries still relying on consumers to voluntarily declare that they owed taxes and remit them to the government.

Nevertheless, the AG did not recommend a new legislative solution to foreign vendors in her Report.

The AG did recommend:

The CRA expand its compliance activities and leverage available third-party data to enhance its ability to detect and deter non-compliance of GST/HST remittance in e-commerce, including accommodation sharing.

a) The CRA agreed, with the "odd" caveat that on the basis of the current legislative framework, its efforts are fully satisfactory.

The CRA implement mechanisms to track, monitor, and report the number of compliance activities it conducts to manage the risks of non-compliance in e-commerce.

a) The CRA agreed to analyze its tracking and monitoring methodology with respect to the compliance activities it conducts to manage the risk of non-compliance in e-commerce.

The CBSA review the Courier Low Value Shipment Program to improve the validation and collection of the GST, HST and PST.

a) The CBSA agreed to review the process and improve the validation of taxes collected.

Absent a new foreign vendor sales-tax framework, the implications for Canadians are restrained politically, and revolve around increased enforcement efforts. As discussed in our previous article "Uber's Tax Woes Signal Gig Economy is the Next Frontier in CRA's Tax Collection Efforts" gig economy participants will likely see some measure of increased CRA enforcement.

Meanwhile, Canadian consumers will continue to benefit from the "honour system" imposed by the current regime. Individuals are mandated to calculate and remit any sales tax owed, whenever their purchase price of a foreign sourced e-commerce good or service exceeds $2.00. The impracticality of the current regime is exceeded only by its idealism.

Was it worth changing the VDP program for 100 Paradise Papers audits?
Taxation

$1.7M For CRA's "Malicious Prosecution" Set Aside On Appeal

Will the Samaroo malicious prosecution case go to the Supreme Court?