Bounty programs: Ineffective in the war on money laundering 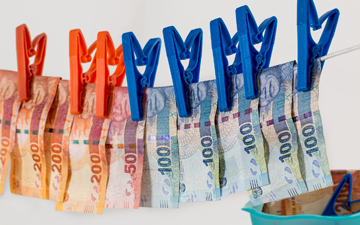 VANCOUVER – Much like the war on terrorism and the war on drugs, the politics of law-making around the war on money laundering could easily be co-opted to impose Orwellian measures that risk eroding our liberties.

As the political hysteria over money laundering reaches its pinnacle, and as I have pointed out before, policy-makers are resorting to measures, oftentimes first seen in the United States, that would result in serious invasions of privacy.

Now, there is a growing push to import another Americanism into the Canadian anti-money laundering strategy: a whistleblower incentive program that would amount to bounty hunting for violations.

Implementing a program such as this would not only be unfair, it would be fundamentally ineffective.

The U.S. has had bounty hunting programs for banking law violations for some time, presented under the guise of whistleblower protections. Most notably under the Dodd-Frank Act, which encompassed a series of reforms brought about to better regulate Wall Street after the 2008 financial crisis.

An enhanced bounty program for anti-money laundering violations came into effect this January with the passage of the Anti-Money Laundering Act (AMLA). It was included as part of the National Defense Authorization Act for Fiscal Year 2021, an omnibus bill that passed in December 2020 with bipartisan support, despite former President Trump’s veto.

Under the new AMLA, a whistleblower that reports violations of anti-money laundering laws to the government that results in an enforcement action of more than US$1 million (about C$1.3 million) is entitled to a “reward,” calculated as a percentage of the money collected by the state.

What is the Dodd-Frank Act? (CNBC)

Under Dodd-Frank, these rewards were capped at US$150,000; but the new AMLA has no cap. Instead, whistleblowers receive a reward of up to 30 per cent of the enforcement action. Given the magnitude of some recent money laundering scandals, whistleblowers could receive hundreds of millions or even billions of dollars.

The AMLA also expands the scope of who may receive a reward to people that were ineligible under Dodd-Frank, such as internal auditors, lawyers or compliance officers — people whose job it is to find and correct behaviour before it turns into misconduct. It also protects whistleblowers from retaliation against their employers.

Crossing the border into Canada

Being our closest ally and trading partner, what happens in the U.S. inevitably influences Canada, and the anti-money laundering bounty hunter program is no exception.

The Ontario Securities Commission has already implemented a similar program and recently made its first payments under the scheme, totalling $7.5 million. Likewise, the Canada Revenue Agency (CRA) has created a bounty program for offshore tax cheating, called the Offshore Tax Informant Program, which offers informants up to 15 per cent of the tax collected relating to the non-compliance they report.

With recent calls to enhance whistleblower protections in this country, it is only a matter of time before we see more programs like this across Canada.

Caught in the crossfire

At first glance, these programs might seem attractive. But they suffer from three fundamental flaws.

First, they are completely reactionary, only rewarding the reporting of misconduct after it has occurred. This means that an employee who finds out about potential misconduct and does nothing, but reports it to the government later, gets a reward. Whereas an employee who stops misconduct from happening, gets nothing. This underscores that when you do things right, people won’t be sure you’ve done anything at all.

Second, research suggests that financial incentives like these may actually decrease whistleblowing, which upends its entire purpose.

Third, and most troublingly, as I’ve raised previously in relation to the CRA’s offshore tax informant program, bounty programs like this create a strong incentive to provide misleading or unreliable information in the hopes of receiving an award.

It has long been understood in the criminal law context that information provided based on the hope of gaining an award or advantage — particularly from someone who may themselves be implicated in the wrongdoing — is unreliable. This lesson was only learned in the criminal law sphere after countless wrongful convictions.

Anti-money laundering policy-makers would be wise to look to these unfortunate experiences before extending a fundamentally flawed structure to yet another facet of our legal system.

Joven Narwal is an adjunct professor at the UBC Allard School of Law, University of British Columbia. Image by Steve Buissinne from Pixabay.

The CRA is sending a clear message that tax evasion does not pay, says David J. Rotfleisch
Opinion