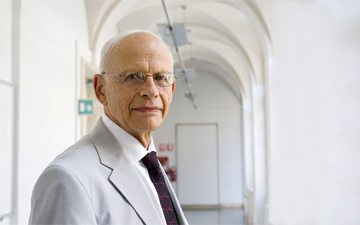 TORONTO – In June 2016, Professor Baruch Lev of the Stern School of Business at New York University published The End of Accounting and the Path Forward for Investors and Managers, with his co-author, Professor Feng Gu of the University of Buffalo.

To say the book had an impact is an understatement. A broadside against present-day financial reporting, Lev labelled financial reports "not only completely useless, but ... actually misleading.”

Professor Lev will be speaking at the University of Calgary business school on September 8. On November 17, he will give a presentation at a conference on intangibles and disruptive innovations at the Rotman School of Business at the University of Toronto. He also hosts a Wordpress blog called Lev End of Accounting.

Exactly one year after the publication of his critical cannonade, Canadian Accountant caught up with the professor for an update on his work.

Can you give us an update on you and your work since you published The End of Accounting?

I’m still amazed at the interest in the book. Just last month I spoke to 350 CFOs in New Orleans, 300 accountants and financial officers in Tulsa, Oklahoma. Two weeks ago I spoke in Barcelona, Spain, inaugurating the Spanish translation of the book. The book sold very well and it’s being translated into four languages and I expect much more reaction abroad in the months to come.

Why do you think The End of Accounting has resonated?

I got an email from a CFO of a large company that said, “my investors don’t understand accounting nor do they care.” I think it’s resonated because I’m the only one — with my co-author of course  — who is talking about it.

Somehow for some reason accounting is never in the public debate. People debate endlessly environmental regulations, food and drug regulations, everything — but when it comes to accounting, there’s a lack of interest.

Do you think certain parties benefit from that?

Definitely. The greatest beneficiaries are the regulators. They’re completely isolated from any criticism. They just continue doing what they do — things to outsiders that look completely crazy.

The FASB [Financial Accounting Standards Board] worked for 15 years on the revenue recognition project — something that takes me exactly a couple minutes to explain in class — and came out with a monster of 706 pages and it was so complicated that, when it came out, no one could apply it. So they had to postpone the application after 15 years of working on it.

This is a huge burden on financial officers. And it’s not just me. There was recently a survey of CFOs, and many of them said that accounting and financial reporting had degenerated into a compliance exercise. "It’s not that we think about providing useful information, it’s just complying with insane regulations."

The End of Accounting applies mostly to GAAP. Would you apply your opinion to IFRS as well?

It’s very close but I must compliment IFRS in one respect — they made an important step forward in R&D. IFRS calls for capitalization of the “D” in R&D, development, meaning when the project is beyond the technological visibility test. The remaining cost has to be capitalized. And studies, including mine, have shown that this indeed is considered an asset by investors and provides some insight into the future.

So it’s a very small step but at least they took it. But the balance sheet model is basically the same.

Is there anything on the horizon that may be new, surprising or concerning?

One positive is that the FASB recently put intangibles on its agenda. I hope my book was a contributing factor to it. They even had a conference on intangibles. They seemed to take seriously that people are really amazed that accounting didn’t adjust to any of the revolutions in technology [and] business models.

The only problem is that it usually takes 10 or 12 years for a project like this to materialize. So I don’t know if it will come in my lifetime. But at least there’s some slight recognition that the world changed. And they have to do something about it.

About 10 years behind the times.

People have been talking about intangibles for years.

You know, everyone writes about it: the six most valued companies in the world are now tech companies, which are basically completely intangible. They don’t have any assets at all. Google doesn’t have any assets except for maybe five million computers.

Coming back to your original question, that’s what resonates with people. That finally someone writes about this and even comes up with a new approach.

Tomorrow: The second part of our interview with Baruch Lev: Why A.I. scares auditors.

In part two of "Catching up with Baruch Lev," the author of "The End of Accounting" tells a story about the transformative potential of artificial intelligence to disrupt the audit profession through machine learning