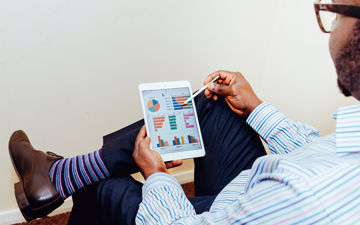 MONTREAL – Blockchain technology threatens to upend the financial sector. While this presents an opportunity to reduce costs for businesses and consumers alike, it may also make some professions, like accounting, obsolete.

What can financial professionals do to reposition and rebrand themselves in the face of potential extinction?

They’re not the first to be replaced by technology, after all. Over the past two decades, travel agents have been replaced by sites like Expedia and Priceline, while taxi drivers are being supplanted by Uber.

What’s different here is that accounting and finance are considered elite professions. These vocations are highly paid and require high levels of education and training, raising questions about how other professions might fare in the face of technological disruption.

How do professions at risk of extinction reassert their value in order to stand a chance at survival?

What do they do best?

The first thing professions need to do is reassess their value proposition. What does their profession do better than anyone else? How can this expertise be repackaged in order to appeal to new clients or customers, or develop new service lines?

As an example, accountants have long been aware that technology has the potential to disrupt their profession. Some are suggesting that blockchain may replace auditing altogether. However, auditors have been able to successfully repackage their expertise to expand into new areas like awards ceremonies, business school rankings or even sustainability reports.

To do this, the accounting profession had to figure out where its strengths lie and how these might be combined with other forms of expertise to create something new.

One place auditors are doing so is in the area of sustainability assurance, which involves auditing a client’s social, economic and environmental performance. This could mean, for instance, assessing and verifying an industrial client’s reported greenhouse gas emissions.

Some auditors are recognizing that while they don’t possess the scientific know-how to validate the science behind sustainability reports, they are able to engage experts from those areas so that, together, they can create a new business line.

While accountants have been unable to entirely eliminate the threat of technological extinction, some have been able to revive their position in the market by finding new buyers for their services.

Blockchain technology poses a unique challenge because it was designed to upend the traditional financial order. The cryptocurrency Bitcoin is created, distributed, traded and stored with the use of blockchain, essentially a decentralized, peer-to-peer ledger system that is changing the way money is exchanged.

Although the probability of banks being replaced by blockchain-based applications is unlikely in the short term, the trend could take hold in the long run. As a result, several banks have developed platforms that allow their clients to trade cryptocurrencies like Bitcoin, Ether or Ripple.

Global financial services company J.P. Morgan has developed a digital coin that provides instantaneous payments between institutional clients. The high-profile financial institution’s embrace of blockchain-based products represents an abrupt departure from comments made by the company’s CEO in 2017, when he called Bitcoin a fraud.

This change in sentiment reflects a broader shift in regulators’ and bankers’ attitudes towards cryptocurrencies — and blockchain, more broadly.

Recognizing that blockchain technology isn’t going away, bankers are instead looking for ways to leverage their status as trusted financial brokers to provide confidence to customers wishing to experiment with cryptocurrencies. Like the accountants expanding into sustainability assurance, bankers are leveraging their strongest advantage — their reputation as trusted intermediaries — to create a new product for the digital age.

Professional groups like Chartered Professional Accountants (CPA) Canada (the national organization representing the Canadian accounting profession) have called on the next generation of CPAs to become data masters. This may not be realistic. Becoming data experts while maintaining an accountant’s foundational knowledge in tax, financial reporting and auditing may end up producing a generation of jacks-(and janes)-of-all trades who are masters of none.

The reality is that technological disruption threatens all professions and the prospect of extinction is real. The best way to fight back is to focus on what a profession does best — and get even better at it.

While it may be tempting to try to turn finance professionals into data scientists, this could do more harm than good by detracting from what profession’s key areas of expertise, making it even more likely that a profession will become an endangered species. Instead, financial professionals need to focus on finding new uses for their skills.

Erica Pimentel, CPA, CA, is a doctoral candidate in accounting and a Concordia Public Scholar at Concordia University in Montreal. Follow her blog on Concordia.ca. Top image by Adeolu Eletu at Unsplash.

Why finding meaning at work matters

Thought Leader Erica Pimentel, CPA, CA, on how to cultivate meaningfulness at work during a global pandemic
Thought Leaders