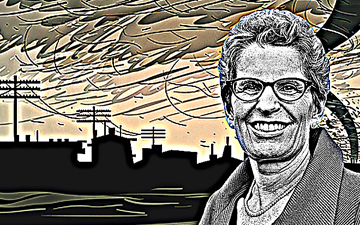 TORONTO, June 6, 2018 – So here we are, on the final day before the Ontario provincial election, and Premier Kathleen Wynne has already conceded defeat. Don’t vote for me, says Wynne, because you obviously don’t like me, but please vote Liberal. Don’t be foolish and elect Doug Ford. And don’t get desperate and elect Andrea Horwath.

How did we get to this sad state of affairs? Well, Canadian accountants and the accounting profession had a heck of a lot to do with it.

If you don’t know the full story by now (where have you been?), it all began in March 2017, when the Liberal government, concerned that rising Hydro rates might cost them the next provincial election (it has and will), pulled a fast one.

They cut electric bills under the Fair Hydro Plan. One month later, they announced a balanced provincial budget. Soon after, Auditor General Bonnie Lysyk stepped in to ask, what about the billions of dollars that your rate cut cost? Forget about that, said the Liberals. Not only will we recover the costs in the future, but we can record them as assets. Lysyk called it creative accounting. Others called it worse.

The state of standards

What does the Hydro accounting fiasco tell us about Canadian accounting? Well, let’s begin with accounting standards themselves. Ontarians now realize that there is more than one set of standards, and different frameworks can be applied by governments and organizations to meet their (often short-term) needs.

Second, rate-regulated accounting, despite its rough ride in the media, is perfectly legitimate and has been used by public sector utilities and private sector pipeline companies for years. The concept is simple. Regulated industries, which require government approval to set rates, should have the means to defer costs by carrying them forward into future years when, presumably, they will recover those costs through asset sales or price hikes.

Last year, I had a conversation with Professor Michel Magnan, FCPA, FCA, of Concordia University. As a former director of Canada’s Accounting Standards Board (AcSB), Magnan referred me to the Board’s own research, which showed widespread use of U.S. GAAP by Hydro utilities in BC, Ontario and Quebec, but the use of IFRS by smaller provincial utilities in Manitoba and New Brunswick.

As AcsB makes clear, U.S. GAAP, which permits “the recognition of balances arising from rate regulation,” is typically used by investor-owned (private sector) entities. At the time, Magnon slyly hinted to me that Ontarians should “follow the money.” Indeed, Wally Smieliauskas, professor of accounting at the Rotman School of Management, recently pointed out that rate regulated accounting under U.S. GAAP was used by Enron, the poster child for creative accounting.

The Ontario government was advised in its framework by three of the Big Four accounting firms (Deloitte, KPMG, EY), Navigant, a consulting firm, and Blakes, a law firm. As reported by the Globe and Mail, KPMG earned between $86,000 and $92,000 in annual fees in the past three years for auditing the books of Ontario’s Independent Electricity System Operator (IESO).

The IESO is the agency that manages the province’s electrical system and acts as an intermediary between power generators and consumers. For its advice on the IESO’s new use of rate-regulated accounting, KPMG earned $652,000 in 2017.

At a time when the U.K. government seems intent on forcing the Big Four to split its audit and consulting services into separate entities — due to the fallout from the collapse of public sector construction company Carillion — the Ontario government had no such concerns over conflict of interest. KPMG had also appeared, just one earlier, before a Senate committee investigating offshore tax shelters. The Wynne government should have known the optics were bad.

What does this tell us? That governments, through agencies such as the Public Accountants Council of Ontario, have the power to properly regulate and change accounting frameworks and standards but will not if the status quo serves their interest. That professional accounting bodies see no upside to expressing an opinion on politically charged controversies.

And that “professional judgment” can be an elastic concept; accountants and lawyers are paid very well to find solutions that often follow the letter of the law if not the spirit. It’s the primary reason that public trust in the accounting profession has fallen in the past few years.

Just as there are competing accounting frameworks, there are accountants with competing visions of fairness. If there’s a hero in this sad and even sordid tale, it’s Auditor General Bonnie Lysyk, one of Canada’s “activist auditors general.”

She took considerable heat for pointing out that future generations of Ontarians are now on the hook for a short-term, politically motivated accounting solution. Millennials across Ontario should send her a note of thanks.

Then there’s Al Rosen, who’s had a very good year. His criticism of accounting in Canada’s cannabis sector prompted several senior executives of marijuana companies to acknowledge and even complain that Canadian accounting standards were inadequate and even misleading when applied to their product.

Then Rosen was quoted by the Globe and Mail in its excellent feature, “Bad books: How Ontario’s new hydro accounting could cost taxpayers billions,” to explain the dangers of rate-regulated accounting. Love him or hate him (we love him), Rosen remains one of the few household names in Canadian accounting circles.

As Ontarians head to the polls tomorrow, their impression of the Liberal government has been tarnished by a “technical dispute between accountants.” It’s worth noting, however, that, when the B.C. NDP was in Opposition, the party had been vocal for years in its accusations of improper accounting at B.C. Hydro.

Just last week, however, the new B.C. Minister of Energy, Michelle Mungall, stood in the Legislature to praise B.C. Hydro and its fiscal status. Now that a new government is in power, the accounting fiasco at B.C. Hydro has magically disappeared.

Will a new government in Ontario be any different?

Note: In a statement provided last year to Canadian Accountant, Charles-Antoine St-Jean, chair of the Public Sector Accounting Board, said PSAB “sets accounting standards for public sector entities, including sovereign governments, to prepare their public accounts. Our role does not include arbitration or becoming involved in preparer/auditor debates. However, we will continue to monitor these developments as they unfold. We are very committed to addressing areas where public sector accounting guidance needs to be enhanced, clarified, or provided in general.”

In a statement provided during the same period, the Ontario Treasury Board Secretariat explained that "The province’s financial statements are prepared in accordance with Canadian Public Sector Accounting Standards (PSAS) ...  PSAS is, however, silent on the recognition, measurement, presentation or disclosure of rate-regulated activities. In absence of a clear position on an issue, standard accounting practice dictates that an entity should consult other accounting standards (of which ASPE is one). However in this case, the Independent Electricity System Operator (IESO) consulted US GAAP, the accounting framework in North America that provides the most developed guidance on rate-regulated operations.

"Many entities in Canada, including Ontario Power Generation (OPG) and Hydro One use rate-regulated accounting. Rate-regulated accounting is well understood in the electricity sector, and the approach selected was taken in that context. The recognition of regulatory assets brings IESO in line with 6 other independent system operators in North America, including the Alberta Electric System Operator (AESO), ISO New England, New York Independent System Operator (NYISO), the Midcontinent Independent System Operator (MISO), PJM Interconnection LLC and the Electric Reliability Council of Texas (ERCOT).

"The IESO management, IESO’s Audit Committee, IESO’s Board of Directors, IESO’s external auditor and the Office of the Provincial Controller all support the use of rate-regulated accounting by IESO."