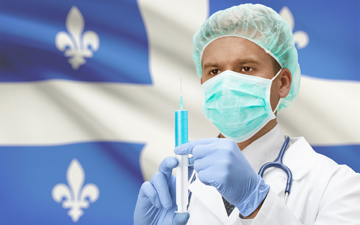 Fred O'Riordan, National Leader of Tax Policy at EY Canada, on whether Quebec's health tax on the unvaccinated can "move the needle"

OTTAWA – Québec Premier François Legault’s announcement this week that the province plans to impose a health tax on the unvaccinated took many observers by surprise. It should not have. Taxes are often used to change behaviour, not simply raise revenues. There’s nothing particularly novel about the decision to use taxation as a public policy instrument to provide an additional “nudge” and persuade those who haven’t to get the jab. Other policy tools, such as requiring vaccine passports and restricting access to certain services serve the same purpose. And while they’ve made an impact, there remains a minority of Québecers who continue to resist the province’s call for vaccination.

This proposal is not the equivalent of imposing a user fee. It won’t restrict access to medical services or treatment, nor require citizens to pay more for treatment — doing so would be discriminatory and likely constitute a violation of their Charter Rights and the Canada Health Act. Instead, the tax will be calibrated and imposed with the express intent to change behaviour in an effort to minimize the “additional risk” their choice deems to have on the health care system’s capacity to serve all Canadians.

Ironically, the tax would be most successful if it raised no revenue at all.

This certainly isn’t the first time we’re seeing taxes used to influence societal risks and impacts that are otherwise unpriced. Carbon taxes are another good example.

The tax system is already widely used by governments to achieve health goals and objectives, although most often by relieving existing tax burdens rather than imposing additional ones, as is the case here. Examples include so-called “tax expenditures,” such as the federal disability tax credit and various provincial fitness tax incentives. The former is designed to compensate taxpayers for their additional health-related expenses and the latter to encourage healthy behaviour — in both cases, by reducing income tax liabilities.

As for imposing an additional tax burden to change behaviour, federal and provincial tobacco taxes are the most notable examples. Though an important difference here is that these are commodity taxes imposed on the tobacco products, rather than income taxes on the smokers.

In one way, a “head tax” on smokers would be a better public policy solution. It would help resolve the contraband tobacco problem since smokers would be taxed regardless of where their supply comes from. But there are a number of reasons why tobacco taxes are not imposed this way. Why does it matter? One key reason is extremely relevant and may prove problematic for the Legault proposal: privacy.

The thing is, medical proof that someone isn’t vaccinated doesn’t actually exist – only an absence of that proof. So, rather than eliminating those with proof of vaccination from the tax, as would presumably need to be done here, it would actually be easier for Québec to offer tax relief (in the form of a tax credit) to the vaccinated. The privacy concern would then go away and the end result would be the same — a higher tax burden on the unvaccinated, creating an additional incentive for them to get vaccinated to instead receive the tax relief.

But a remaining concern is the socioeconomic makeup of the unvaccinated population. To the extent that data shows, many come from less affluent, less educated or racialized segments of society, making this additional tax burden appear unfair, inequitable and discriminatory.

It will be interesting to see whether this tax proposal has the desired effect of “moving the needle” (pun intended) and persuading unvaccinated Québecers to get the jab. Should that happen, a tax (or a credit) may not be necessary at all.