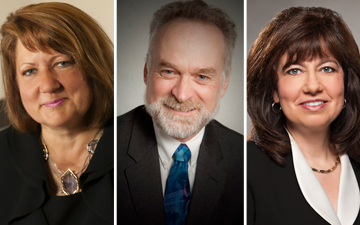 Carol Bellringer. Michael Ferguson. Bonnie Lysyk. What the three most recognized auditors general in Canada think of the activist label

OTTAWA, Mar. 9, 2018 – In October 2017, the auditor general of Saskatchewan, Judy Ferguson, said that, despite taxpayer requests, she could not investigate the provincial government's decision to close Saskatchewan Transportation, a Crown Corporation bus company. “(People) think it’s our job to hold the government to account," said Ferguson. "Well, no, that’s actually the job of the legislators. It’s the job of the committees. We don’t hold anybody to account; we don’t have that authority.”

Ferguson's critics pointed out that, in 2013, Ontario Auditor General Bonnie Lysyk investigated the divestment of the Ontario Northland Transportation Commission. Ferguson countered that the situations were not comparable. As reported by the Saskatoon StarPhoenix, "Ferguson went on to acknowledge that while her role is prescribed by law, her office is planning to spend more time explaining what its mandate is, and what it can and cannot do."

As we explored in part one of our series, "Canada's Activist Auditors General," by Canadian Accountant reporter Jeff Buckstein, CPA, CGA, the public profile of the auditor general has risen in recent years, to the point where it has invited a backlash, in which some pundits have applied the term "activist" to a conservative calling.

The three most highly recognized auditors general in Canada — Carol Bellringer in BC, Bonnie Lysyk in Ontario, and the Auditor General of Canada, Michael Ferguson  — are all Chartered Professional Accountants (as is Judy Ferguson). They represent the public sector apex of the accounting profession, a position of prestige and public trust in Canada, and they agreed to be interviewed by Canadian Accountant.

“I don’t feel we’re activist,” says Ontario Auditor General Bonnie Lysyk, from her office in Toronto. She notes that the Office of the Auditor General (OAG) presents information to the Ontario legislature through the course of its audits, but that it is ultimately up to the provincially elected members to decide what, if anything they want to do with those reports.

Sometimes the OAG is required to report on issues that unavoidably end up attracting a lot of public attention that people will interpret and talk about, says Michael Ferguson, Canada’s current Auditor General, who is also responsible for auditing Yukon, the Northwest Territories and Nunavut. But “I don’t see us as activist. I would say that we very much are promoting the good practices of the government,” he insists.

Emmett Macfarlane, associate professor of political science at the University of Waterloo, doesn’t like the activist label. “I think we can risk being a little dismissive of the full context by using the term activism, because it can imply that the actor is going beyond his or her role. That’s a very difficult line to draw. The Auditor General was given this change in mandate in the late '70s, and as a result, we see significant powers to initiate investigations,” he says.

Yet OAG offices across Canada have also been criticized for issuing public commentary on government policy, the argument being this is overstepping boundaries into something that is the purview of elected officials.

“I think the criticism is definitely fair to the extent that there’s almost an unavoidable political element to the role, because when you’re doing policy analysis, there’s certainly discretion in the way the office conducts itself — what kind of language, and how should it frame its analysis in the media?” says Macfarlane.

“You can use sharper words that are going to get more attention and generate headlines, and certainly there’s nothing apolitical about doing policy analysis. This is what troubles some critics with value-for-money auditing — that it’s a little more inherently political than kind of pure accounting,” he adds.

Ferguson says his OAG is careful not to step over the line.

“Our job is to audit the implementation of policy. We wouldn’t say ‘that’s a bad policy.’ I think that’s one thing people don’t always understand about us, is that really our audits are about how the public servants are implementing the policy. It’s always the government and the elected members that have to respond to our audits, because they end up with the ultimate responsibility.”

How clear is the legislation governing auditors general?

“We put a lot of thought into our work, and do not believe we tread on policy,” insists Lysyk, who accuses the media of taking material in her reports highlighting certain issues or problems, then putting their own spin on that.

For example, Lysyk cites the Ontario government’s Fair Hydro Plan policy decision to reduce electricity rates in Ontario, of which her office disagreed with the accounting methodology.

“We’re commenting on how it chose to implement that policy decision by choosing a method of financing to present the accounting as being appropriate that’s about $4 billion more expensive to Ontarians than if they had financed it through the normal way,” she says.

The Ontario government disagrees with Lysyk on that issue and the province’s Treasury Board Secretariat recorded their opposition to her office’s recommendations to change their accounting for The Fair Hydro Plan in the most recent OAG annual audit report, as well as in a special prior report issued by the OAG.

“It’s always a difficult line that we’re not permitted to cross in B.C. The legislation’s quite clear that we can’t comment on the merit of policy, and I think that’s true across Canada. Sometimes what happens is the minute you mention a particular program there is a pick-up of the discussion that gets into policy that the auditor never even went close to. As an auditor, I’m always cautious about what I say that could be a conclusive comment. But I appreciate how tough that is,” says Bellringer, who is based in Victoria.

In March 2017, for example, Bellringer warned the provincial Liberal government that she thought their budget ad, two months before a provincial election, was too political. “[Although] we didn’t seek it out, it became a media discussion, and the media phoned us and asked our view,” she explains, reiterating that she shared her office’s concerns with the government first.

Jeff Buckstein, CPA, CGA, is an Ottawa-based journalist. Introduction by Colin Ellis. This is the part two of a four-part series. Read the entire series by clicking on the following links: