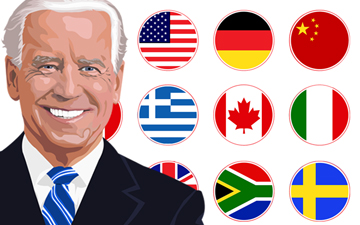 OTTAWA, Dec. 17, 2020 – Joe Biden’s triumph over incumbent Donald Trump in the 2020 presidential election should go a long way towards restoring the traditional close alliance between Canada and the United States. But certain economic tensions will still persist, even after Biden is sworn into office on January 20, 2021, warn experts.

It is hard to predict whether Biden will continue Trump’s trend toward protectionism and deglobalization, or whether his policies will revert to free trade and globalization — and, if the latter, the degree to which that might occur, says Stephen Williamson, a professor of economics at the University of Western Ontario in London.

Williamson, who is also UWO’s Stephen A. Jarislowsky Chair in Central Banking, expects that Biden will be more inclined to abide by international trade agreements and be more cooperative with institutions like the World Trade Organization.

But the platform of Biden and Vice President-elect Kamala Harris also included a detailed “plan to ensure the future is ‘made in all of America’ by all of America’s workers.”

For example, the incoming Administration has pledged to “bring back critical supply chains to America so we aren’t dependent on China or any other country for the production of critical goods in a crisis.” And they would like to strengthen ‘Buy America’ provisions requiring that “all of the steel, iron, and manufactured products used in transportation projects are melted, mined and manufactured in the U.S.”

Biden has expressed a desire to repair and restore traditional international alliances with countries like Canada, the U.K., France, Germany, Australia and New Zealand, and to have the U.S. re-engage globally on various issues such as taxation, international trade and climate change, says Fred O’Riordan, the Ottawa-based national leader of tax policy for Big Four accounting firm EY Canada.

However, Biden’s commitment to a “made in all of America” plan could be problematic for Canada if that translates into hard line policies, like not allowing non-U.S. firms to bid in procurement processes for government contracting, O’Riordan notes.

The Biden victory provides more certainty regarding trade, which is the number one concern between the two countries given how integrated the two economies are, says Williamson.

In contrast, had Trump won re-election, “we would have been faced with considerable uncertainty. One would never know when Trump might have taken it on himself to impose some tariff at random. Then we would have to respond, and that’s just not good for the trade relationship,” he says.

“Historically the Democrats in the U.S. have been more on the side of trade protections than the Republicans. President Trump has completely flipped that. I think there has been no greater protectionist in the U.S. political world in decades than Trump,” says Jean-François Perrault, senior vice-president and chief economist for the Bank of Nova Scotia in Toronto.

Perrault notes that, whereas Trump tended to view trade as being detrimental to American economic interests if the U.S. had a trade deficit, Biden has more conventional views on trade. For Canada, this likely means more certainty, fewer attacks on our steel, aluminum, and auto industries, and hopefully less tension with respect to softwood lumber.

During its single term in office, the outgoing Trump Administration illustrated a distrust for international institutions like the World Trade Organization. The Biden Administration will start to rebuild that trust and have “more faith in these institutions, rather than take a go-it-alone approach,” predicts James Marple, senior economist and managing director with TD Bank in Toronto.

Perrault believes that Biden might attempt to have the U.S. re-enter the 11-country Trans-Pacific Partnership (TPP) trade agreement, which includes Canada. A key rationale behind the TPP is for member countries to put pressure on China to abide by international trading rules. The U.S. initially signed the TPP in 2016 under President Barack Obama, when Biden was the Vice-President.

China will be a strategic focus for the Biden Administration

One thing appears certain: tensions between the two largest economies in the world are not going to disappear anytime soon. The Democratic Party has a tradition of being protectionist and so “I don’t think we’re going to see a major shift in policy with respect to China,” says Marple.

While the Trump Administration’s tone, tactics, and very aggressive approach to China, including the imposition of tariffs, may be less provocative under the incoming Biden Administration, many irritants and concerns between the U.S. and China remain over issues like intellectual property protection, the trade deficit, and national security, Marple elaborates.

The Biden Administration is also more likely to take a multilateral approach with its allies and jointly pressure China over these issues rather than fight multiple simultaneous trade wars with Canada, Mexico and countries in the European Union. This may result in a more conciliatory approach with Canada on issues such as softwood lumber, aluminum and steel, he predicts.

“One of the hallmarks of the Trump period was this kind of continual fear of a trade war between China and the U.S. That’s because the President had basically isolated every other country in the world. So all the options to engage with China were from a U.S. perspective through the means the President chose — which were retaliatory tariffs. That was bad for everybody,” says Perrault.

In contrast, “I think President-elect Biden is going to try and be more diplomatic in his dealings with China, pressure China with the World Trade Organization, or have a coalition of countries stand up to China in a more unified front. I imagine China will feel more pressure from a broader range of sources in a Biden Administration than they managed to feel in a Trump Administration,” says Perrault.

Those actions should lead to better outcomes for all countries, including Canada, because if the two largest economies in the world — the U.S. and China, respectively — are on better terms with each other, the global economy will benefit, he elaborates.

Perrault also believes the new Biden administration will continue to demand more transparency for the auditing of Chinese corporations as a prerequisite to U.S. market listings.

Under the Trump Administration “the negative China policy was kind of random. It didn’t have well defined goals or a strategy. I wouldn’t anticipate a difference in the general attitude, but the Biden Administration might be more effective in dealing with China, which would be good,” says Williamson.

Jeff Buckstein, CPA, CGA is an Ottawa-based business journalist. Combined image from Sinisa Maric and heblo from Pixabay. Want to read more from Jeff Buckstein on the economic consequences to Canada of the incoming Biden Administration? Click on the following links for more: