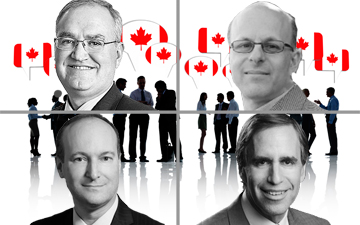 Part four in our series: How will the Canadian economy recover from COVID-19?

OTTAWA, Dec. 1, 2020 – Avery Shenfeld believes that business and consumer behaviour during the COVID-19 crisis foreshadow at least some permanent changes. One of Canada’s leading economists, Shenfeld is the managing director and chief economist at CIBC World Markets.

According to Shenfeld, COVID-19 will accelerate certain trends that already existed, such as online retailing, which has been gaining market share. That doesn’t mean people will stop going to stores, but “we’ll probably not return to the same market share that stores had relative to online retailing prior to the crisis, and there may be some empty retail space that lingers for a while,” he says.

Douglas Porter, chief economist at the Bank of Montreal in Toronto, believes that individual travel will fully recover eventually, but business travel might be in a slightly different world when the dust settles. “People have become much more comfortable with doing virtual meetings. That’s not to say business travel is going to go away completely, but I think it will be challenged a little bit more in the future.”

Shenfeld says that eventually we will go back to flying, and to restaurants, and participating in all of the activities we were doing previously, as economic growth resumes. He predicts annual growth will return on a trend basis to between one and a half and two per cent. In 2022 and 2023, he adds, the economy could grow much faster because a lot of ground needs to be made up to get back to full employment.

Losers in the legacy

Craig Alexander, chief economist with Deloitte Canada in Toronto, expects that business failures will be an unfortunate legacy arising out of the current environment.

“Regrettably, the majority of those businesses that fail are going to be small businesses because they have less ability to be resilient during these tough times. And there are going to be workers that can’t return to the job they had pre-COVID, because that job might not exist,” says Alexander.

The digital economy bears some responsibility for that shift. Large businesses like digital giants that have gobbled up market share are better positioned to deliver goods and services to Canadians than many small businesses, which had not invested in e-commerce platforms, he explains.

Leverage will be another legacy.

“From a debt point of view we used to just worry about households. Now we’re going to be worrying about business debt and government debt as well,” Alexander says. “Many businesses have taken out a lot of debt to stay alive.”

The shift to remote work will also have a profound impact. Even in the post-COVID environment, when the health risks have diminished, “many Canadians are going to say ‘I want to continue to work from home’ or ‘I don’t want to go into the office as much as I did pre-COVID.’ And there are going to be businesses that say ‘I can save a lot of money on real estate if I have my workers continue to work remotely,’” predicts Alexander.

“There are going to be some big economic scars that take a long time to recover from,” says Alexander. But “when we get to a world where the health risks have diminished, we’re going to have a lot of businesses that start up.”

For example, “when the health risks have diminished Canadians are still going to want to go out and eat, and they’re probably going to find they can’t go to many of the restaurants they used to go to because those businesses didn’t survive. But there’s going to be a market demand and so you’re going to have a lot of new restaurants that start up,” he predicts.

Many retailers are also going to go under, although many new retailers will get launched post-COVID, and they will all be configured for e-commerce, Alexander adds.

“I think we have to be careful about assuming some changes that have gone on in the past six months will be permanent,” cautions Porter. “But we can draw some conclusions. Almost certainly part of the work-from-home trend will be lasting. I don’t think it’s going to completely take over. But it will be more acceptable and widely used.”

Another change as a result of more people working from home will be a greater willingness to live further from downtown cores. “The commercial real estate area does face some challenges as a result of this — although maybe not as extreme as what some folks are talking about these days,” says Porter.

In the fifth and final part of our five-part series on how the Canadian economy will recover from COVID-19, we look at possible roads to recover, despite the nation’s growing debt and deficit.

Jeff Buckstein, CPA, CGA is an Ottawa-based business journalist. Image by Steve Buissinne from Pixabay and Canadian Accountant. This is the fourth article in a five-part series. Read the full series in order:

In part three of our five-part series, Canadian economists weigh in on post-pandemic taxation
Business