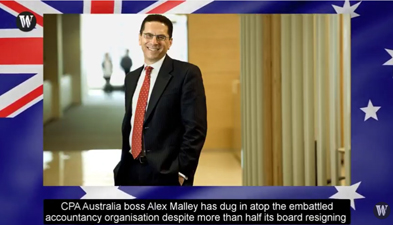 Does it hold any lessons for Canadian accountants?

Breaking news, August 4, 7:30 a.m.: The Australian Financial Review reports that the remaining board members of CPA Australia will leave by the end of this year: "Remaining 'old guard' CPA directors to follow Alex Malley out the door."

Those are the key figures in a cautionary tale of governance at the Australian Society of Certified Practicing Accountants (CPA Australia), one of the largest accounting associations in the world.

It began in February with an email sent by a practitioner, Brett Stevenson, to the head of CPA Australia, Alex Malley, and ended this year with Malley’s ouster, a mass resignation from the association’s board, and a current Australian Senate hearing into the conduct of the board.

Along the way, accounting editor Edmund Tadros of Australia’s Financial Review wrote a series of investigative articles that roused accountants, embarrassed the profession, and turned CPA Australia into a national scandal that has reverberated around the world.

“I am keenly aware of the turmoil at CPA Australia,” says Canadian David Michayluk, CPA, CA. “The controversy is being covered widely in [Australian] newspapers and in the other media.” Michayluk was educated in Kingston, Ont., at Queen’s University before becoming a chartered accountant in 1991. He was a research and visiting fellow at the University of Adelaide for seven years before moving to Louisiana State University this year.

“I'm not a member of CPA Australia but have some involvement as I recently gave an unpaid lecture for them when I was in Shanghai,” says Michayluk, adding, “CPA Australia operates in China and other countries in the Asia-Pacific region.”

In his view, Michayluk has a vested interest in the resolution of the controversy. “It reflects on the CPA brand worldwide. My opinion is that the accounting bodies should  have the highest level of corporate governance, since it is our reputation that is impacted by this controversy. We should be able to get the controls right in our own organisation!”

Alex Malley wanted to change the public’s perception of accountants. No longer the tax practitioner or the company controller, CPAs would be dynamic business leaders of the 21st century.

As chief executive officer of CPA Australia, Malley was described as “the world’s most ambitious accountant,” the author of The Naked CEO, the Truth You Need to Build a Big Life, and the TV host of In Conversation with Alex Malley. The media ventures and marketing often focused on Malley himself, rather than the CPA designation, and Malley often opined on branding and leadership.

In February 2017, however, Financial Review columnist Joe Aston launched a broadside against Malley (“Alex Malley’s big life on CPA money”), which drew the attention of a 62-year-old practitioner named Brett Stevenson. The antithesis of Malley, Stevenson worked as a public accountant in Armidale, a small city akin to Oakville or Milton in Ontario. (His son, Jesse Stevenson, runs a company called Floral Image in Toronto.)

Stevenson, infuriated by the focus and cost of the marketing, emailed Malley and used the “Find a CPA” program on CPA Australia’s website to copy about 100 members. It was the first of many he would send. He also set up a website called CPAmembers.org to share his concerns.

As Stevenson’s email morphed into a groundswell of member rebellion, a main sticking point became CPA Australia’s refusal to disclose its board’s compensation. The accounting body issued a 16-page defence of its practices. It also moved its April AGM to Singapore, ostensibly to honour its history in Asia, meaning 70 per cent of its membership would have to fly to Singapore if they wanted to attend their AGM in person. Or they could watch it via livestream.

Finally, after weeks of defending its practices, the board disclosed it was paying Malley $1.8 million a year, and another $1.8 million in salary and benefits to its board of directors.

“From a finance perspective, the lack of disclosure about the CEO salary is a concern,” says David Michayluk. “If the position truly warranted that level of pay then the lack of disclosure is disappointing. I am concerned that the board oversight may have been lacking and that the controls that should have been in place were absent. It is hard to see why an organisation like CPA Australia had to have such a high level of CEO pay.”

The view from Canada

“I’m not suggesting in any way that people shouldn’t be paid what they’re worth,” says Professor Richard Leblanc of York University’s School of Administrative Studies, “but there should be greater transparency. People in the governance sector need to practise what they preach. That’s what happened in Australia — the CEO’s pay was not disclosed.”

Leblanc is the editor of The Handbook of Board Governance (Wiley, 2016), the director of York’s master of financial accountability program, and an associate professor of law, governance and ethics at York’s faculty of liberal arts and professional studies. He believes in greater disclosure of compensation as well as pay for performance in the NFP sector.

“Every director of the board of an NFP should know what the CEO is making and should approve it. It’s their most important duty — to approve the pay of the CEO.” Leblanc says not-for-profit regulations need to be strengthened in Canada to compel disclosure of executive pay. “One of the advantages of disclosing pay is it compels NFPs to develop performance metrics. Disclosure compels rigour.”

Leblanc singles out directorship organizations in Canada and the U.S. for “practise what they preach” disclosure but adds CPA Canada to the conversation. “They should have their pay disclosed. And their metrics. There should be a linking of pay to performance of senior executives.”

According to Tobin Lambie, principal, media, at CPA Canada, “CPA Canada monitors compensation-related trends both domestically and internationally. Not-for-profit organizations in Canada are not required to report employee compensation and we do not.”

Adds Lambie, “Our board has a human resources committee which is regularly reviewing the compensation landscape through a third-party to ensure that CPA Canada’s compensation structure is aligned with the marketplace. The committee and the overall board includes public representation.”

“One likely possibility [for the current state of CPA Australia] is that the board was captured by the CEO,” says Michayluk. “A lack of truly independent directors may have prevented the checks and balances in good corporate governance.”

Indeed, as described by the Financial Review, CPA Australia changed its governance structure in 2005, when Malley was one of 16 national directors. “The objective was to make the election of directors more representative of the membership,” wrote the Review's Aaron Patrick and Patrick Durkin. As detailed here, the Representative Council not only included regional representation but sectoral, such as “mature members” and “young members.”

“A self-selecting structure was created where the board chooses half the members of a council, which appoints the board. Regular CPAs cannot vote for or against board members.”

Michayluk also points out that there were accusations of workplace bullying, specifically about Malley, which were widely reported. Says Michayluk, “I hope we can find out what truly happened so that as a profession we can prevent something like this from happening again.”

The tale that never ends

In late June, CPA Australia terminated Malley’s contract, giving the former CEO a $4.9 million golden parachute. Earlier that month, half the board of CPA Australia resigned.

In July, 16 former CPA leaders demanded an emergency meeting with the remaining board members, and the country’s second largest accounting body, the Chartered Accountants of Australia and New Zealand (CA ANZ) publicly welcomed any members who wished to defect from CPA Australia.

Most concerning to practitioners was the loss, in July, of their public practice insurance scheme, which limited their liability from malpractice lawsuits, as CPA Australia’s government regulator chose not to renew the scheme for at least six months.

Now, in the latest chapter of the national scandal, the remaining board members of CPA Australia have been called by an Australian Senate committee to “explain their actions during the accounting body's descent into a governance quagmire.”

Given the 21st century pressures faced by the international accounting community in terms of demographic and technological disruption, the idea by CPA Australia to reposition its members as business visionaries was defensible and perhaps even appropriate. But, as pointed out by the Financial Review, “in hindsight, Malley's determination to raise his profile sky high was a strategic error,” as it exposed issues of questionable corporate governance to the membership.

As this week’s committee hearing wrapped up, its chair commented on the “extraordinary behaviour” of CPA Australia. “[The] opacity and obfuscation,” she said, “is just mind-blowing.”

"This is a great article," says Brett Stevenson, the Australian CPA at the centre of this story, via email. Stevenson says the battle has been "disgraceful" in its impact on the profession. "We have a lot of ground to recover professionally here in Australia."

For Stevenson, the controversy also raised issues around professionalism, membership organizations, the use of accounting standards and minimum disclosure. But he is pleased that the Senate hearing is considering an amendment to Australia's Corporations Act, "to overcome some of the failings that CPA Australia have managed to exploit."

On a personal note, Stevenson visits his son in Toronto. "We have great friends there and have always loved it," and recently spent a relaxing week in Meaford, Ontario.

Is CPA Australia making another mistake by not hiring a CPA as CEO?

Letter from Down Under: Words of warning from an Australian CPA