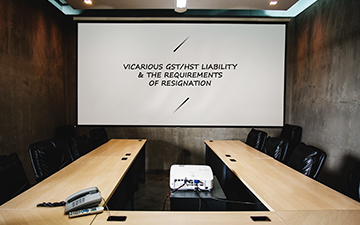 This raises the question: How does a director prove the date of resignation if the CRA insists otherwise? This very question was at issue in Singh v The Queen (2019 TCC 120).

After examining section 323 of the Excise Tax Act, this article reviews the Tax Court's decision in Singh and offers some tax tips based on the decision.

Director's Liability under Section 323 of the Excise Tax Act

Section 323 expands the CRA's power to collect a corporation's unremitted GST/HST when efforts to collect against the corporation prove futile. In other words, it is a tax collection tool.

The vicarious GST/HST liability under section 323 may apply to either a de jure director or a de facto director. A de jure director is one who is appointed in accordance with the governing corporate statute—that is, a legally appointed director. A de facto director, on the other hand, is one who in fact fulfils the duties of a director despite no legal obligation to do so. This typically involves an individual who either (i) continued acting as a director even after properly resigning from that post or (ii) was never a legally appointed director yet took on the responsibilities of a director. In other words, the vicarious tax liability under section 323 doesn't discriminate between a person who acts like a director and a person who is a director. Each faces the same exposure to a director's liability assessment.

Still, section 323 contains three checks. These checks serve to limit a director's personal exposure to a corporation's GST/HST debts. And they ensure that the CRA cannot pursue the directors until the corporation's assets prove insufficient to satisfy the GST/HST debt.

First, subsection 323(2) says that a director isn't liable for a corporation's unremitted GST/HST unless one of the following has occurred:

Third, subsection 323(3) protects a director who exercised due diligence. A director isn't liable for the corporation's GST/HST debts if, to prevent the corporation's failure to remit, the director "exercised the degree of care, diligence and skill" that "a reasonably prudent person would have exercised in comparable circumstances."

In 2007, Mr. Singh and his wife were directors of Ranadia Inc., an Ontario corporation. Ranadia failed to file GST/HST returns. As a result, in 2007 and 2008, the Canada Revenue Agency arbitrarily assessed Ranadia for GST/HST totaling about $15,000.

By 2015, Ranadia's $15,000 GST/HST debt had remained unsettled. In the summer of 2015, the CRA registered a certificate in Federal Court. In February 2016, the CRA filed a writ of seizure and sale against Ranadia for its still outstanding GST/HST debt. The sheriff attempted to collect on the writ, but the amount went uncollected.

In response, Mr. Singh ultimately appealed to the Tax Court of Canada, where he alleged that he had resigned as Ranadia's director on June 3, 2011 — more than two years before the 2016 assessment for director's liability.

The sole issue before the court was whether Mr. Singh's evidence sufficed to show, on a balance of probabilities, that he had resigned on June 3, 2011. If so, then the director's liability assessment was invalid, and Mr. Singh incurred no personal liability. If not, then Mr. Singh would be vicariously liable for Ranadia's GST/HST debt (plus the interest that had accumulated since).

Mr. Singh tendered the following evidence of his resignation:

Mr. Singh had previously submitted a copy of each document to the CRA's Appeals Division about two years before the Tax Court hearing, in 2017, during the objection stage of the tax dispute.

The Canada Revenue Agency, in response, purported that the following evidence showed Mr. Singh had in fact not resigned in June 2011:

The Tax Court rejected these concerns.

Second, the court dismissed the notion that the five or six day gap between the two tranches of resignation documents cast doubt on their legitimacy. The court observed that these documents were sent five days apart after discussions between a CRA agent and Mr. Singh. The court found that the two tranches of documents showed "contemporaneous legitimacy" because they were consistent, they were sent within a short period of time, and Mr. Singh's subsequent cover letter referred to "additional documents requested."

Finally, the court determined that the omissions in the directors' register and the unfiled notice of change were "not strictly relevant to Mr. Singh's resignation." Neither is a requirement under section 121 of Ontario's Business Corporations Act:

Legally, a director ceases to hold office when he or she resigns or at the date such resignation references, whichever is later. He or she resigns when it is effective, and that occurs when a written resignation is received by the corporation. [para 49]

But even more important, the court observed that "the imperfect quality of [Mr. Singh's] evidence ... adds rather than detracts from credibility because it has not been over presented or sanitized through the advantage of the passage of time or the ability to effect curative provisions." This, according to the court, distinguished Mr. Singh's case from the cases cited by the Crown — such as Bono v H.M.Q, 2010 TCC 466, in which "resignations appeared... 'from nowhere' mere days before the trial."

The court ultimately decided in favor of Mr. Singh based on the credibility of his evidence. It concluded that it was "prepared to accept Mr. Singh's evidence. It has some warts. Those warts show it was not prettied up, as it were. On balance, it shows he resigned as a director on June 3, 2011."

In the end, the Tax Court of Canada allowed Mr. Singh's appeal and held that he incurred no vicarious GST/HST liability under section 323 of the Excise Tax Act.

If you're a director (or merely acting as a director) of a corporation with GST/HST arrears, you may become vicariously liable for those GST/HST debts. You may limit your exposure by resigning — thereby starting the clock on the two-year limitation period. But the resignation must meet the requirements of the governing corporate law. A corollary of the Singh case is that it won't suffice if you simply file a notice of change removing yourself as the director on the corporate registry.

On the other hand, the Singh case does not mean that corporate registry filings and minute book contents are irrelevant. Nor does the case suggest that a former director may outright ignore a request from the Canada Revenue Agency. In Singh, the taxpayer succeeded not because of the errors and omissions in the corporation's minute book and filings; he succeeded because, despite the errors and omissions, he made no attempt to conceal them.

A director seeking to retire from the corporation must understand and execute the requisite steps in accordance with the governing corporate law. And even if not technically required, the corporation's filings and records should reflect that director's resignation. A director wanting to remain involved with the business — but not in the capacity of a director — must guard against a claim of de facto directorship. For you will remain exposed to a director's liability assessment should you carry on as a de facto director.

Taxpayers may mitigate late filing penalties in some circumstances
Practice

Why taxpayers cannot rely on advice from the CRA

The CRA's response to a Federal Court Of Appeal decision