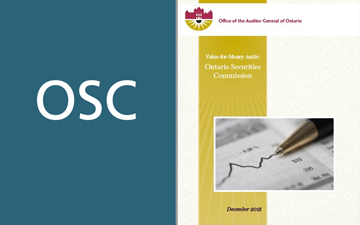 TORONTO, Jan. 15 , 2022 – A value-for-money audit of the Ontario Securities Commission by the Auditor General of Ontario has revealed that the provincial securities regulator has only collected 28 per cent, or $145 million of the $525 million it imposed in monetary sanctions in the ten fiscal years between 2011-12 and 2020-21, inclusive. But Canadian accounting firms EY Canada (Ernst & Young LLP) and BDO Canada were compliant in paying their fines for audit failures.

Sanctions were imposed for disgorgements, investigative costs and administrative penalties. “We noted that while the OSC has been successful in collecting amounts through monetary sanctions from legitimate and regulated market participants, the vast majority of the uncollected balance is owed by unregistered and unregulated individuals and entities,” wrote Lysyk.

Unregulated respondents are typically less compliant with fulfilling their legal or regulatory obligations, including the monetary sanctions ordered against them, she elaborated. “Although the OSC has various tools at its disposal that it uses to enforce the collection of monetary sanctions…the tools are not adequate to improve collections from fraudsters who are not regulated individuals and entities,” the report noted.

In order to improve that situation, Lysyk recommended that the Ontario Ministry of Finance provide the OSC with collection enforcement authority similar to that of the British Columbia Securities Commission (BCSC). The BCSC has the powers to “freeze, preserve and dispose of assets that were transferred below fair market value to family or third parties; and restrict a person’s ability to access a driver’s licence or licence plate.”

In a highly publicized case, Sino-Forest, a timber company, filed for bankruptcy and was found guilty in Ontario court of engaging in securities fraud. Zungui Haixi, a shoe manufacturer, also collapsed and $10.85 million was awarded by an Ontario court in a class action lawsuit.

In 2020, BDO Canada LLP paid the OSC a $3.5 million administrative penalty and $500,000 in costs in connection with the firm’s audits of the 2014 and 2015 financial statements of two privately offered investment funds that subsequently went into receivership and were found to have engaged in fraud.

It cited how, for example, on “deferred sales charges, the Ministry [of Finance] surprised the OSC by initially publicly opposing the OSC-led CSA’s consensus on needed reform in September 2018. The Ministry later reversed its position in May 2021. This incident demonstrated the government’s ability to override the OSC’s judgment and supportive evidence on a proposed reform.”

“Our objective in highlighting that is [because] government has a right to make policy decisions. But people expect that policy decisions are based on evidence and in the case of the situation we cite in the audit report, evidence showed that deferred charges and trailing commissions should have been banned sooner,” Lysyk told Canadian Accountant.

The OSC responded to the comments in the report. “We acknowledge that key investor protection reforms — including the Client Focused Reforms and bans on deferred sales charges and trailing commissions charged by discount brokers — have taken considerable time to develop and implement through multiple public consultations and implementation periods.

“We also agree that additional and timely action should be considered if these reforms do not serve the best interests of investors,” the OSC added, noting that it is closely scrutinizing how these reforms are being implemented.

The Auditor General’s report said the OSC has limited enforcement tools. For example, it noted that the Corporate Finance Branch lacks "adequate regulatory authority to respond effectively and on a timely basis when it identifies a lack of sufficient disclosure by companies that have distributed securities using a regulatory exemption."

She recommended that the OSC “develop a formal roadmap and budget for reviewing and implementing new data analytics tools and approaches, including the ability to identify, evaluate and reduce Ontario securities law violations and misconduct occurring on websites or social media.”

The OSC agreed with that recommendation.

“We recognize the need for greater access to data analytics tools, which would allow us to evaluate potential misconduct more efficiently, and we will continue to prioritize this area,” it responded.

“Building an Enterprise Data Platform with modern data, reporting and analytical tools is one of the key initiatives identified as part of the digital and data transformation at the OSC. The platform will have the ability to ingest data from multiple sources, including social media. Third party tools that allow bespoke analytics will also be considered to support specific needs as prioritized by the enforcement branch,” said the OSC.

The OSC needs to put in place the IT systems that it requires to do its job better, seek to make changes so that it receives all the information it needs, and ensure that it has relationships with people who are providing it with the necessary information, Lysyk told Canadian Accountant.

“Even though we don’t have a national regulator, the OSC still needs to make sure it is set up to be a strong, effective regulator in Canada,” she stressed.

Jeff Buckstein is a freelance business journalist based in Ottawa.

This is a two-part series on the Auditor General of Ontario's value-for-money audit of the OSC. Read part one of the series, Ontario Auditor General wants better communication between audit and securities watchdogs.