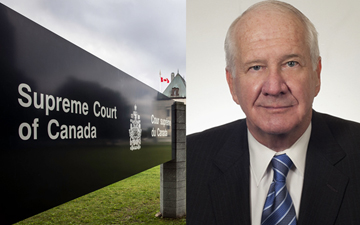 Allan Lanthier: The resolution of a Quebec tax dispute is now in the hands of the Supreme Court, which has recently been taxpayer-friendly

MONTREAL – In late March, the Supreme Court of Canada granted leave to appeal in Des Groseillers,[1] a decision of the Quebec Court of Appeal in favour of the Quebec Revenue Agency (QRA).

The taxpayer had donated unexercised stock options to registered charities and claimed donation tax credits, but did not include any amounts in income as stock option benefits. The Court of Quebec found in favour of the taxpayer, a decision that was then reversed by the Quebec Court of Appeal. The Supreme Court will now have the final say.[2]

Mr. Des Groseillers (the “taxpayer”) was chair, president and chief executive officer of Groupe BMTC (BMTC), a publicly-traded corporation that, through wholly-owned subsidiaries, operates a retail network for furniture, electronic goods and household appliances in the province of Quebec.

Over the years, the taxpayer had been granted a number of stock options and, in 2010 and 2011, he donated some of his unexercised options to arm’s length, registered charities. The taxpayer claimed donation tax credits for the donations but did not declare any income, on the basis that he received no consideration for the donation (more on this issue shortly).

Under the BMTC plan, a holder could elect to receive cash equal to the value of the options in lieu of shares (“cash-settled options”). Also, while the options were generally non-transferable, there was an exception for registered charities — options could be transferred to charities, provided the charities exercised the option within three working days and elected to receive cash. In the years 2010 and 2011, the taxpayer transferred options with a value of about $3 million to registered charities, and a wholly-owned subsidiary of BMTC paid cash of $3 million to the charities.

The QRA assessed the taxpayer and included $3 million in income as stock option benefits, without deductions for “qualified” stock option plans.[3] Prior to 2010, the administrative position of the Canada Revenue Agency, and presumably of the QRA, was that these deductions were generally available for cash-settled options. However, due to concerns regarding partial taxation to the employee and full deductions to the employer for the cash payments, the 2010 Canadian federal budget provided that, for dispositions of stock options after March 4, 2010, tax relief is denied to employees for cash-settled amounts, unless the employer elects not to deduct the cash payments. The Quebec government announced that it would also adopt this measure.[4] Accordingly, the employee deduction for cash-settled options no longer applies unless the employer corporation elects to forego its own deduction.[5]

The issue in dispute

The taxpayer’s position is that article 422 does not apply to an arm’s length gift of stock options, for three reasons. First, article 50 does “otherwise provide” an amount  —  the value of consideration received from the charity, which was zero. Second, article 422 does not deem “consideration” to have been received. And third, the rules in the QTA that govern the calculation of the amount of a stock option benefit are a “complete code” which include all of the relevant rules.

Not surprisingly, the QRA’s position is that article 422 does apply, and deems the consideration for the disposition to be fair market value.[6]

The decision of the Quebec Court of Appeal

The Court of Quebec had found in favour of the taxpayer, and the QRA appealed to the Quebec Court of Appeal. Cournoyer JCA, speaking for a unanimous court, concluded that the trial judge erred in concluding that the taxpayer did not receive a taxable benefit on the donation of the stock options, and reversed the lower court’s decision.[7]

First, Justice Cournoyer stated that the modern rule of statutory interpretation must be applied, and cited with approval the relevant paragraphs of the decision of the Supreme Court of Canada in Placer Dome.[8] Namely that: the words of an Act are to be read in their entire context and in their grammatical and ordinary sense harmoniously with the scheme and object of the Act, and the intention of Parliament; taxpayers are entitled to rely on the clear meaning of taxation provisions, and where the words of a statute are precise and unequivocal, those words will play a dominant role in the interpretive process; but where the words of a statute give rise to more than one reasonable interpretation, the ordinary meaning of words will play a lesser role, and greater recourse may be required to the context and purpose of the Act.

Applying these principles, the court concluded that there is no real conflict between articles 50 and 422 of the QTA. The broad wording in article 422 suggests that the legislator’s objective was to impute an amount equal to fair market value to any disposition for the purpose of computing income; also, that the stock option rules do not prevent the application of other provisions of the QTA for this purpose.

The taxpayer argued that the stock option provisions are a “complete code” that govern the amount of a stock option benefit. The court disagreed, stating that there are no judicial precedents of either the federal or provincial courts that come close to the issue in this case, and referred in this regard to the 2017 decision of the Federal Court of Appeal (FCA) in Ferlaino.[9]

In Ferlaino, the taxpayer had received stock option grants for shares of his employer’s U.S. parent company, with an exercise price denominated in U.S. dollars. The taxpayer exercised the options (acquiring and then immediately selling the shares on the open market), and argued that the amount paid for the shares (the exercise price) should be calculated using the Canada-US exchange rate on the date the options were granted, not the date they were exercised. In dismissing the taxpayer’s appeal, the FCA stated that “…section 7 of the Act constitutes a complete code for the taxation of employee stock options”, but only in the sense that tax implications for the exercise of stock options “are solely triggered on their exercise date”. The taxpayer was required to compute the taxable benefit using the stock option rules, but applying paragraph 261(2)(b) of the ITA as well.

More precisely, here come the justices of the Supreme Court — the resolution of the dispute is now in their hands. And the court has been taxpayer-friendly in recent decisions.

For example, in Alta Energy,[10] a divided court concluded, in a 6 to 3 decision, that a non-resident taxpayer was treaty-protected from Canadian tax, even though the transaction involved flagrant treaty shopping. In her first sentence, writing for the majority, Côté J stated that “[T]he principles of predictability, certainty, and fairness and respect for the right of taxpayers to legitimate tax minimization are the bedrock of tax law.” The majority’s judgement was 97 paragraphs, but it was hardly necessary to read any further.

It will be many months before a decision is rendered. It should be a doozy.

[1] Des Groseillers c. Agence du revenu du Québec; 2021 QCCA 906.
[2] As will be seen from the discussion that follows, the taxation of stock option benefits involves a number of complex rules: these complexities have increased as a result of the recent enactment of further restrictions for stock options that exceed an annual $200,000 vesting limit (applicable to employers that are not CCPCs, and are members of a group with consolidated annual revenue greater than $500 million).
[3] Paragraph 110(1)(d) of the federal Income Tax Act (“ITA”), and article 725.2 of the Quebec Taxation Act (“QTA”). In this article, statutory references are generally provided for both the ITA and the QTA.
[4] “Additional Information on the Budgetary Measures”; 2020-2011 Budget; Government of Quebec; March 30, 2010.
[5] Subsection 110(1.1) of the ITA and article 725.2.0.2 of the QTA. On the other hand, the employer election is not relevant to the additional deduction for charitable donations under paragraph 110(1)(d.01) of the ITA and article 725.2.2 of the QTA:  this deduction simply does not apply to cash-settled options.
[6] It is not clear why article 314 of the QTA (subsection 56(2) of the ITA) does not also apply, considering that cash payments were made to the charities, presumably with the taxpayer’s consent.
[7] The decisions of the Court of Quebec and the Court of Appeal were issued in the French language. Certain of the comments that follow are based on my own (and decidedly unofficial) translation.
[8] Ontario (Minister of Finance) v. Placer Dome Canada Limited; 2006 SCC 20.
[9] Ferlaino v. The Queen; 2017 FCA 370.
[10] Canada v. Alta Energy Luxembourg S.A.R.L.; 2021 SCC 49.
[11] Supra footnote 5 and accompanying text.

The Robillard decision:  The uncertain world of death and taxes

Allan Lanthier on confusion in surplus stripping and the post-mortem pipeline, due to a recent Tax Court of Canada decision
Thought Leaders