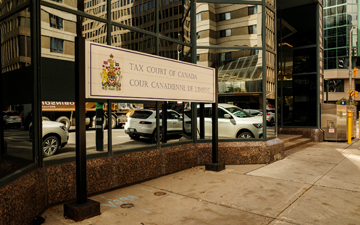 Introduction: The Purpose of the Charitable Donation Tax Receipt

As a matter of social policy, Parliament recognizes the benefits of philanthropic donations to the community. As such, taxpayers who have made donations to qualified donees can claim a charitable tax credit to help reduce their tax payable. Qualified donees include registered charities, registered Canadian amateur athletic associations, and registered Canadian municipalities to name a few. Since the charitable tax credit reduces the donor's tax payable, the Canadian Income Tax Act contains provisions to limit the scope of gifts and the type of recipients that can receive the gifts to prevent misuse of the tax credit.

Recently, the Tax Court released a decision on the eligibility of an estate for a charity donation tax credit in relation to the estate's donation of shares of a private corporation to an non-arm's length foundation. In The Estate of Late Edmond G Odette v Her Majesty the Queen, 2021 TCC 65, the Court held that consideration used to purchase a non-qualifying security, such as shares of a private corporation, from a foundation (a qualified donee) cannot be satisfied with a promissory note (another type of non-qualifying security). The Court also held that consideration must be received by the foundation at the time of disposition. Accordingly, the Court denied the Estate from claiming a charitable donation tax credit.

The transfer of shares to the Foundation

According to Mr. Odette's two wills, the remaining assets of his estate were to be given to the Foundation, which included all issued and outstanding shares of the Corporation. Consequently, the Estate obtained advice from its tax lawyer on how to best transfer the common shares from the Corporation to the Foundation. To achieve the transfer, the following steps were undertaken:

The Canada Revenue Agency (CRA) reassessed the Estate's 2012 taxation year and disallowed the Estate from claiming the tax credits relating to the transfer of the shares to the Foundation.

Issue and the Applicable Law on the Gifting of Shares

Issue Before the Tax Court

Applicable Law on the Gifting of Shares

Under paragraph 118.1(13)(a) of the Canadian Income Tax Act, a gift of a non-qualifying security, one that is not considered an excepted gift (i.e a gift of a share made to a donee with whom the donor deals with at arm's length), is treated as if the gift had not been made. That said, if the security is no longer considered a non-qualifying security within 60 months of making the gift or if the recipient of the gift disposes of the gift within that 60-month period, then the donor is deemed by virtue of paragraph 118.1(13)(b) and (c) to have made the gift and may be eligible to claim a charitable donation tax credit.

To understand the application of the paragraph, one must also examine the meaning of a non-qualifying security. As defined in subsection 118.1(18) of the Income Tax Act, a non-qualifying security refers to an obligation of an individual or the individual's estate with which the individual or the estate does not deal at arm's length immediately after that time. It also refers to a share of a corporation that is not listed on a designated stock exchange with which the individual or estate does not deal at arm's length. As can be seen, the key principle underlying a non-qualifying security is the idea that the donor and the recipient are at non-arm's length-that is, the donor and recipient have an existing personal or business relationship where one party can influence the decision of the other and manipulate the value of transactions.

Position of the Parties Regarding What Constituted "Any Consideration"

Ruling of the Tax Court

This case highlights that if shares of a private corporation are donated to a registered charity, two important things must be met under paragraph 118.1(13)(c) of the Income Tax Act to be eligible for a charitable tax credit. First, a promissory note is not adequate consideration if the parties involved were acting at non-arm's length. Parliament permitted tax credits for situations where the donor is impoverished, and the recipient (charity) is enriched. Because a promissory note does not create a genuine intention to pay between non-arm's length parties who can use the promissory note as formality but never actually make the payments, a promissory note is not adequate consideration. Second, timing is important. Consideration must be received at the time of disposition and such consideration must not be a non-qualifying security, such as a promissory note. If you are planning on making gifts of non-qualifying securities to registered charities, this case shows that certain requirements must be met to claim a charitable tax credit.

The CRA did not rightfully impose a gross-negligence penalty in Bowker v. The Queen, explains tax accountant and lawyer David J Rotfleisch