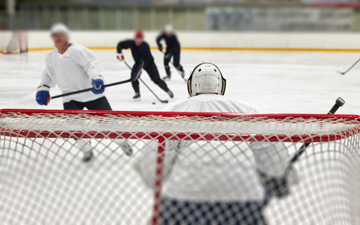 Just in time for the playoffs, Dave Nonis scores a win in the Tax Court of Canada, six years after his dismissal as General Manager of the Toronto Maple Leafs

In Nonis v. The Queen, the Honourable Mr. Justice Randall S. Bocock, of the Tax Court of Canada, ruled in favour of former Toronto Maple Leafs General Manager David (Dave) Nonis against the Canada Revenue Agency (CRA). Nonis won his battle with the CRA, as the tax court judge found the CRA's position to be "absurd."

Mr. Nonis, who grew up in Burnaby, British Columbia, was hired as the senior vice-president and director of hockey operations of the Leafs in 2008. In 2013, he was named general manager and held that position until April 12, 2015, when he was fired. Since then, he has always stayed in the U.S. and considers himself a US. resident for tax purposes. During his employment with the Maple Leafs, he filed tax returns in both Canada and U.S., and paid Canadian income tax prorated based on the number of days he spent in Canada each year.

His employment contract with the Maple Leafs said that he would be guaranteed continued salary benefits for the balance of his contract and one year of medical coverage if he was terminated without cause. After he was let go of the team, Mr. Nonis used the same formula he used in 2013 and 2014 to file his 2015 and 2016 tax returns, and reported 37 days in Canada in 2015 and 0 in 2016.

The treatment of signing bonuses has undergone changes in the past. Initially, when a U.S. resident received a signing bonus before their arrival to Canada for a Canadian sports team, the total amount of the bonus would not be taxable income earned in Canada even though relevant, related and reflective of the expenditure of effort and services to be performed in Canada. However, there was an amendment to the Income Tax Act in 1981 that added a special rule to deal with certain professional athletes' contracts who can receive large signing bonuses but relatively smaller annual salaries paid thereafter.

This new rule made signing bonuses subject to proration formula used for the season and taxable in Canada. The athlete may find some relief from Canadian tax under a tax treaty. For instance, the Canada-US Tax Treaty generally allows Canada to tax U.S. athletes on income earned from a performance in Canada. But this rule doesn't apply to the employment income of an American athlete who competes in a league with regularly scheduled games in both Canada and the United States (e.g., Major League Baseball players, NBA and National Hockey League players).

For those athletes, the Canada-US Treaty applies a 183-day test: The non-resident athlete pays Canadian tax on his or her employment income only if his or her presence in Canada exceeds 183 days in that year. So, whether a non-resident league athlete pays Canadian tax generally depends on whether he or she is employed by a Canadian- or US-based franchise.

The tax dispute with the CRA mainly focused on whether Mr. Nonis or used an appropriate proration formula for his 2015 and 2016 tax years specifically for the period of time after he was fired and returned to the U.S.. The CRA's position was that the tax treatment associated with his salary continuance should be treated the same way as a signing bonus. The CRA also argued that Mr. Nonis should have used the historical proration method that he used in 2013 and 2014, which was about 39%, as a reasonable allocation to allocate his continuance income to Canada for the years of 2015 and 2016. Mr. Nonis disagreed and appealed to the Tax Court of Canada.

The Tax Court judge sided with Mr. Nonis because Nonis has been almost living exclusively in the U.S. since he was let go by the Maple Leafs. Justice Bocock also mentioned the CRA's logic would lead to an absurd conclusion that all non-residents terminated with salary continuation would be taxed on that income, "despite the clear, undisputed cessation of any services preformed in Canada because of an irrevocable departure from Canada."

Justice Bocock allowed the appeal and awarded costs provisionally to Mr. Nonis subject to the right of either party to make written submissions thereon within 30 days of the date of this judgment,

How does Canada tax non-employee athletes?

Under the Income Tax Act, a non-resident athlete who is an employee must file a Canadian income tax return to report all salaries, services rendered and performance related bonuses to the Canada Revenue Agency. If the non-athlete received a signing bonus to perform in Canada, the athlete must report the bonus to the extent that the payor claimed the bonus as a deduction on the payor's Canadian income tax return.

The Canada-US tax treaty generally provides some relief from Canadian tax. For example, although the Canada-US tax treaty allows Canada to tax US athletes on their income earned from their performance in Canada, it doesn't apply to the employment income of an American athlete who plays in a league with regularly scheduled games in both US and Canada such as the NBA or NHL or major-league baseball.

Overall, a non-resident athlete still has an obligation to file a Canadian tax return and there will be interest and penalties if they fail to do so.

David J Rotfleisch, CPA, CA, JD, is the founding tax lawyer of Rotfleisch & Samulovitch P.C., a Toronto-based boutique tax law firm. He appears regularly in print, radio and TV. With over 30 years of experience as both a lawyer and chartered professional accountant, he has helped start-up businesses, resident and non-resident business owners and corporations with their tax planning, with will and estate planning, voluntary disclosures and tax dispute resolution including tax litigation in Tax Court and the Federal Court. Visit www.Taxpage.com and email David at david@taxpage.com.

The CRA did not rightfully impose a gross-negligence penalty in Bowker v. The Queen, explains tax accountant and lawyer David J Rotfleisch
Business

But under certain conditions, accountants may represent taxpayers in Tax Court
Taxation