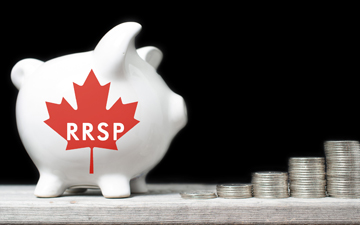 Registered retirement savings plans (RRSPs) are a tax efficient method of investment for individuals created by the government to encourage Canadians to save for retirement.

The basic structure of an RRSP is that a financial institution (the issuer) holds investments in trust (the RRSP) for an individual with whom the issuer has a contract or arrangement that meets certain requirements. When the individual makes eligible contributions to the RRSP, then the individual receives an income tax deduction in the same amount as the contribution. The individual is called the "controlling individual" of the RRSP. The RRSP can then invest the contributions into various types of investments. RRSPs are not allowed to own certain "non-qualifying" or "prohibited" investments. For example, cryptocurrencies cannot be held in a RRSP directly, although it is possible to hold them in a RRSP indirectly through an exchange traded fund or similar securities.

The RRSP itself is exempt from income tax. When the individual eventually withdraws funds from the RRSP, the individual has an income inclusion for the amount of the funds withdrawn. This means that RRSPs functionally allow individuals to invest with "pre-tax income" and have their investments compound tax free until withdrawal.

RRSP contribution room is determined by an individual's "earned income", which among other things includes employment income or business income earned while a tax resident of Canada. Taxpayers can contribute to their RRSPs until December 31 of the year in which they turn 71 years old. Individuals are also required to collapse their RRSPs by December 31 of the year they turn 71. The main options are transferring your RRSP to a registered retirement income fund (RRIF) on a tax deferred basis, purchasing eligible annuities on a tax deferred basis, or withdrawing the funds and having an income inclusion. A RRIF operates in a similar manner to an RRSP, but it requires the beneficiary of the RRIF to withdraw a minimum amount every year.

In addition to the excess contribution tax briefly described above, another problem can arise when amounts are contributed to an RRSP where no deduction is claimed (or where deductions claimed are subsequently denied). By default, all withdrawals from an RRSP result in a corresponding income inclusion in the year the amount is withdrawn. This gives rise to the possibility that an individual could contribute an amount to an RRSP without getting a deduction, then withdraw it and have to pay tax that results from the withdrawal income inclusion for that amount. This effectively leads to the taxpayer having an income inclusion from when they earned the relevant amount plus again for when they withdrew the amount from their RRSP without first getting the offsetting deduction that normally results in the investing with "pre-tax" amounts treatment that RRSPs are intended to create.

The sort of issue normally arises when a taxpayer inadvertently overcontributes to his or her RRSP or when the taxpayer's "earned income" (and therefor the taxpayer's contribution room) is revised or disputed. One reason this can happen is when a taxpayer falls behind on filing their annual tax returns and is therefore not aware of what their true contribution limit is.

Relief through an Offsetting Deduction – RRSP Double Taxation from Overcontribution

Taxpayers removing funds from their RRSPs for which no contribution deduction was available may be able to claim a deduction intended to offset the income inclusion they will have when they withdraw the funds. If available, the taxpayer should claim the deduction on their annual income tax return for the tax year in which they made the withdrawal.

In order to claim the offsetting deduction, the withdrawal from the RRSP must be made:

It is therefore extremely important to make the withdrawal in a year where it will enable the offsetting deduction to be available. Usually, the best approach will be to try to make the withdrawal in the same year as the contribution or in the following year. If that window of opportunity is missed, the taxpayer should consult an experienced Canadian tax lawyer regarding their options for trying to obtain a new notice of assessment or reassessment for the year the contribution was made.

In addition there is an anti-avoidance rule which specifies that an offsetting deduction is not allowed when it is reasonable to consider that:

The CRA acted unreasonably in a recent TFSA overcontribution case