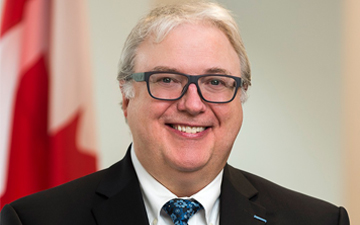 TORONTO, March 26, 2021 - François Boileau, appointed last October to lead the Office of the Taxpayers’ Ombudsperson, sees professional accountants as partners with “their ear to the ground,” and wants to hear their complaints about service at the Canada Revenue Agency. In a wide-ranging interview with Canadian Accountant, Boileau spoke of the “excellent work” conducted by his predecessors and his desire for the OTO to be proactive, including in its relationship with the CPA profession.

Boileau is the third Taxpayers’ Ombudsperson (the title was officially changed from Taxpayers’ Ombudsman last October), following Paul Dubé and Sherra Profit, in the 13-year history of the OTO. Boileau holds a bachelor of civil law from the University of Ottawa and a bachelor’s degree in political science from the Université de Montréal, and is the former French Language Services Commissioner of Ontario.

Raising the profile of a taxpayers’ advocate

Boileau explains that he intends to carry on the work of Ms. Profit, who was an advocate for improved CRA service to marginalized Canadians and taxpayers in remote communities. (Canadian Accountant published a three-part series in 2020 on complaints over CRA service to Northern Canada.)

“The Government of Canada should not enrich itself on the backs of the most vulnerable populations because they don’t file,” says Boileau. “I’m keen to understanding why people won’t file and to the same effect won’t benefit from the credits and the programs due to them.”

Asked what leverage the OTO has to effect change, Boileau responds that all ombudspersons have the same leverage: moral persuasion. “We do investigations, inquiries, examinations … we make recommendations at the end of the day. It’s up to the organization — in my case the CRA — to put the recommendations into place. By making issues public, it’s up to the public and the media to decide whether these issues are important and worthy of Canadians’ time.”

At the same time, Boileau says he is pragmatic. “I’m wary of making recommendations that won’t work.” He wants to raise the profile of the OTO and be more proactive than reactive in reaching out to Canadian taxpayers and their stakeholders, including the CPA profession. He expresses admiration for the proactive relationships of the Office of the Taxpayer Advocate in the United States with its stakeholders, including the American Institute of CPAs (AICPA).

“This is a year like no other for CRA,” stresses Boileau. “They’ve been under enormous challenges. I am very sympathetic to them but still they have obligations to Canadians.”

Boileau has made some noteworthy public statements since his appointment. Last December he acknowledged service issues regarding the service provided by the CRA on the emergency benefit programs throughout the pandemic. Last month, he launched a review into CRA communications during February’s cybersecurity lockout: “When My Account users were locked out, the CRA should have been ready with a clear and useful communication strategy, to prevent an increase in calls from worried and frustrated taxpayers.”

Didn't the CRA already have a crisis communications strategy in place? “That’s a very good question,” says Boileau. “The communications crisis strategy should be something clear and useful to Canadians. It wasn’t the case. At least three or four of my own staff were blocked as well,” he says.

“These kinds of communications strategies failed Canadians and that’s why we launched a review. I know the CRA is under extreme pressure from Canadians to deliver at an unprecedented level of inquiries. I understand that. It’s a year like no other. But they do have an obligation of clarity to Canadians and I don’t they were up to par in that instance.”

While nationwide lockouts attract the attention of the OTO, the more specific issues of tax professionals and preparers cannot be addressed unless complaints are lodged with the OTO. In a recent Canadian Accountant article, we noted the backlog of Voluntary Disclosure Program applications, but Boileau — admittedly new to his position — was unaware of this and other issues.

“I would be curious though if there were issues [regarding the VDP], that issues be brought to my attention, because it’s not something we have dealt with as complaints to my office.” Boileau acknowledged that he has not heard complaints about CRA staff closing files early, although “that might be a trend staff has dealt with.”

The takeaway for Canadian tax accountants and lawyers? Start complaining to the OTO.

The OTO and the Canadian tax system

“Good question,” says Boileau, who has yet to meet with Karen Hogan, the current Auditor General of Canada. “She is an officer of Parliament, I am not — I respond to the Minister [of National Revenue]. At the same time we’re both independent and impartial.

“But, as an AG, her objective is to make sure every program provides value to the Canadian public,” says Boileau of the value-for-money audits of the Auditor General. “My take is mostly about service — how can we improve service to Canadians. It’s not necessarily an accountant perspective — how can we have the best service for Canadians. It’s not a very different objective, but there are some nuances.”

Similarly nuanced is the power of the OTO in a tax system so complex that it can affect CRA levels of service. Boileau chuckles with the mention of the complexities of the Income Tax Act. “This has been going on since I was in law school,” he says. “It was one of the most challenging acts [to study] ever.”

As long as it relates to service by Canadians, says Boileau, even the complexities of the Act and legislation are within his mandate. “But, of course, challenging legislation or even programs would be complicated for me, within the mandate I receive from the Order in Council. That’s the source of my power.”

One might argue that the complications of delivering pandemic relief to hundreds of thousands of Canadian taxpayers and businesses is an example of complex legislation impacting service at the CRA. In particular, the confusion at CRA call centres over the eligibility of the self-employed for CERB, and the difference between gross and net income.

Says Boileau: “My title is Ombudsperson but at the end of the day I am a special advisor to the Minister. So I can advise her on issues of importance but maybe not go public. If they are service issues, I can go public. If we see trends in the ways that Canadians receive their service, we can address that.”

Taxpayers ombudsperson says improvements still need to be made, reports Jeff Buckstein in the third of a three-part series on CRA service to northern Canada
Profession