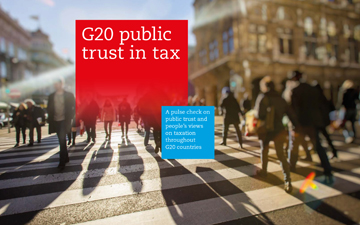 TORONTO, June 1, 2017 – “We’re laying down the gauntlet,” proclaimed Finance Minister Bill Morneau during an address to the Toronto Region Board of Trade on Friday, May 26. Morneau announced that the federal government is set to release a discussion paper on tax evasion. According to Morneau, it's all about fairness.

“People have to have confidence in our system," said the Finance Minister. "They [must] have confidence that it’s fair for them and their family. When people pay their taxes, they want to know that their neighbour pays roughly the same taxes. Right now there are some loopholes in our system that means that that is not necessarily always the case."

Released in March 2017, G20 Public Trust in Tax is a “pulse check” on public trust and taxation throughout the G20 countries, and its conclusion asserts that “A reset is needed: to win back the public’s trust, and create a more effective international tax system fit for the 21st century.”

The study is based on an online survey conducted in early 2017 of more than 7,600 individuals across the G20 including 400 in Canada alone. It explores attitudes towards issues of tax minimization, incentives, information and obligation, all encompassed under the rubric of “trust.”

The data clearly shows that, when it comes to tax-related information, Canadians are a cynical bunch. We distrust business leaders and politicians. We are, at best, wary about professional tax lawyers and non-governmental organizations, including think tanks that specialize in economic policy.

And we are deeply suspicious of wealthy Canadians and multinational corporations, according to the following five surprising results from the ACCA survey:

1. Professional accountants do not contribute to a fairer tax system.

Only 35 per cent of Canadian respondents agree that the work of professional accountants contributes to a fairer tax system. Roughly six in 10 Canadians, however, believe professional accountants contribute to a more effective and efficient system. We do better in this regard than the British, where recent scandals such as Tesco and the Panama Papers may have coloured the public’s thinking. But we do worse than our neighbours to the south, where the public image of CPAs may have benefitted from the regulatory revisions of the Obama years.

In fact, Canadians believe that tax minimization is important for the poor, middle class, and local companies. We believe that wealthy individuals and multinational companies should contribute their fair share to the delivery of social services. This is a common theme in English-speaking, Western democracies like Australia, the United Kingdom and the United States, but we are slightly more egalitarian in our view than Americans and the British.

3. Wealthy Canadians and multinationals are not paying enough tax.

When asked to account for the views of citizens of English-speaking, Western democracies — which account for two of the top five and three of the top 10 economies in the world, Russell Guthrie, IFAC Executive Director, External Affairs, responded: “What we found even more interesting was the wide divergence across the G-20 on this question.

"This divergence is a one reason that collaboration on international taxation is so challenging, and yet so important – if we all only view these issues through the familiar lens of the experience in our country, collaboration and cooperation is more elusive.”

When it comes to the use of tax incentives for economic and social policies, Canadians are cautious and balanced in our view. We believe, like most G20 citizens, that it’s important for governments to cooperate with each other on tax policy. We do not believe in a race to the bottom in attracting multinational investment.

2016 was a difficult year for the reputation of the accounting profession in Canada. It kicked off with the release of the Panama Papers, followed closely by hearings held by the House of Commons finance committee into tax evasion and avoidance.

But the G20 trust survey was conducted prior to the airing of “The Untouchables,” the Fifth Estate’s investigation into “KPMG and Tax Havens for the Rich.” In an email, IFAC confirmed that neither the Panama Papers or the CBC investigation "was a focus in the responses." Had the program aired concurrently, the survey results would likely have been worse.

That said, in a time of heightened government scrutiny of taxation schemes around the world, the accounting profession can ill-afford another scandal that calls into question its self-regulation. When reputable, global accountancy bodies publish findings pointing to "a trust deficit" (the survey report's term) in public confidence across the G20, the findings should be trusted and the move cautiously applauded.

As the G20 Public Trust in Tax points out, “Public confidence is essential to meaningfully implementing consensus reached internationally, and underpins the legitimacy of tax systems.”

CBC Television personality Ian Lee of the Sprott School of Business is outspoken on the subject of taxation in Canada
David J. Rotfleisch